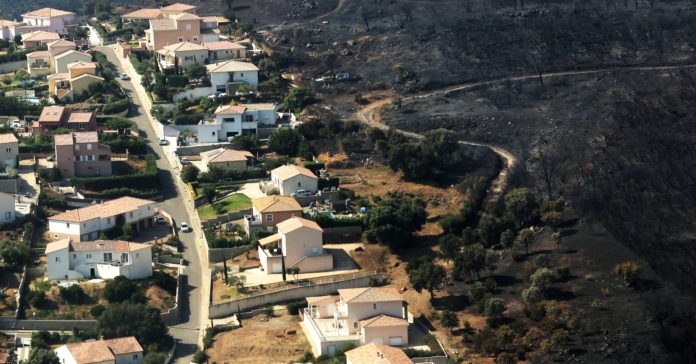 Built well, a city should provide a bulwark against disaster. Fundamentally, all cities are fortresses.

Or at least they should be. If a city is a fortress, where’s the wall? The edges of North American cities today aren’t edge-like at all. Most of them, especially in the West, ooze outward in a gradient, urban to suburban to exurban to rural to wild. Some megacities cycle through suburban and exurban forms without ever manifesting anything that looks like a downtown, much less a high street.

Which would all be academic, or maybe merely aesthetic, if it didn’t make cities fail at their most important job. Cities like that, researchers are learning, make disasters worse. And they’re not the exception; they’re the norm.

For example, human construction at what’s called the Wildland-Urban Interface worsens the risk of wildfire. In last year’s insane fire season—not just California’s worst fire year on record, but one that left much of the continent’s boreal forest aflame—the blazes began where high winds connected with fuel (plants) and sparks (downed power lines, open fires, and other trappings of civilization).

According to a new analysis of housing in the WUI, the trend goes up and to the right. According to Census data, between 1990 and 2010 in the continental US, the WUI grew from 224,325 square miles to 297,299 square miles. The number of new houses grew there, too—by 12.6 million. The big quote from the paper: “Even though the WUI occupies less than one tenth of the land area of the conterminous United States, 43 percent of all new houses were built there.”

The Wildland-Urban Interface got smaller in the western US, but the number of houses and people in it went up.

Friends. Friends. Don’t build there. “Houses are being built everywhere,” says Volker Radeloff, a professor of forestry at the University of Wisconsin and the lead author of the new paper. “But a lot of them are still built on the outskirts. That is sprawl.”

Even taking into account the 2008 housing crash, housing units in the WUI went up along with its size and population.

And climate change makes wildfires more frequent, and worse. “It’s a feedback loop,” says Ethan Elkind, director of the climate program at the Center for Law, Energy, and the Environment at UC Berkeley. “We’ve made it very hard across the country to build in existing urban neighborhoods, which have been shown repeatedly to have lower carbon emission per capita…and we’re subsidizing people living out in sprawling, more vulnerable areas outside cities.”

Fires aren’t the only problem here. Rainstorms over fire-denuded hillsides cause mudslides. Coastal cities expanding across their floodplains and onto barrier islands become more vulnerable to hurricanes and storm surges. Wide, low cities eventually cover land that was once agricultural. And when it comes to climate change, nothing is local; the carbon emitted by the sprawling urban agglomerations of the Eastern seaboard or the desert southwest exacerbates the climate-driven problems of the coasts.

The red in boxes 3 and 4 show new WUI in Santa Rosa, California and Gaitlinburg, Tennessee in 2010. Both places experienced wildfires in the last two years.

The hills, the forests, the edge of the desert—these are beautiful places. “I understand why people like to live there. In some places they’re the most expensive places to live, like Southern California, but in other places the dense urban areas are not affordable for many folks,” Radeloff says. “There’s a lot of money to be made by building there. My gut feeling is that people know it’s a problem, but walking away from those economic opportunities is hard.”

In cities across the country, interest groups, activists, and residents are arguing about the construction of infill housing, working on ways to make cities denser, more walkable, more oriented toward transit instead of cars. If you’re the kind of person who likes cities, all those things make cities more likable. They also reduce carbon emissions, which in the end helps keep those cities safe (among other good outcomes). The late-20th century mode of city-building—unplanned, foaming metastasis around big-box stores—is no way to build a fortress. It’s a disaster waiting to happen.

Fires on the Land

GizmoCrazed - November 28, 2010 1
Auto Racing is more than a sport for many people, to many; it is a way of life.  Many individuals, including drivers, crew members,...

Bacteria To Be Used In Buildings Repair