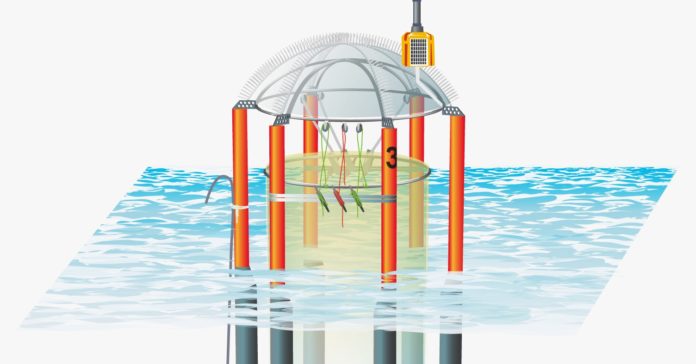 One of the consequences of pumping more and more carbon dioxide into the atmosphere is the changing chemistry of the world’s oceans. Until now, the ocean has acted as a big sponge, soaking up about one-third of the CO2 released by human activities.

But now, scientists are watching a vast experiment unfold. All that carbon dioxide is triggering chemical reactions that is turning the oceans more acidic, which in turn is making life tough for lots of marine organisms. Oysters and other shellfish have been hit by die-offs in the Pacific Northwest and Gulf of Maine, while tropical reefs are dissolving faster than they can rebuild, according to a recent study in the journal Science.

Some researchers are seriously considering geoengineering to reverse the slow acidification of the ocean. Dissolving minerals like olivine or limestone into seawater would increase its alkalinity. (Remember the pH strip in your 10 gallon fish tank? Blue=alkaline, red=acidic.) Not only would that make it easier on marine life, but it would also allow the ocean-sponge to soak up more carbon dioxide from the atmosphere. Two British scientists proposed this idea last year in a paper in the journal Reviews of Geophysics, predicting that with a bit more research (and money) it may be possible to capture hundreds of billions to trillions of tons of carbon without messing up the marine ecosystem.

But this kind of massive planetary experiment needs lots of small-scale work in the laboratory before it’s ready. So in the meantime, marine scientists are trying to find which species will come out on top in a more acidic ocean.

In Sweden, a group of researchers tested survival in an artificially acidic ocean. In a fjord, they built an enclosed, floating test tube they called a “mesocosm” and filled it with phytotoplankton, zooplankton, and tiny herring larvae. Then they turned up the dissolved carbon dioxide, tracking herring survival over time as the acidity increased.

A similar lab experiment with codfish, another important Northern European food fish, killed off the fish. “Our surprise is that we didn’t find that,” said Catriona Clemmesen-Bockelmen, a marine ecologist from the GEOMAR Helmoltz Center for Ocean Research in Kiel, Germany, and a co-author on the study in Nature Ecology and Evolution. “Instead, we had a higher survival rate.” The herring, it seemed, liked the extra acidity.

Why? Two things. First, the higher dissolved CO2 led to a bloom in plankton—food for the fish. Second, it turns out that herring spawn mostly near the ocean bottom, where CO2 levels are already naturally high. That means they are better adapted to ocean acidification than other species like the cod that spawn near the surface.

Does that mean the herring come out on top in an acidic ocean? It depends. Clemmesen-Bockelmen says that ocean temperature is also a big factor for fish larvae. Fish could swim north to find cooler waters, but they wouldn’t necessary find the right food in a new ecosystem. “There will be winners or losers depending on adaptation and biology, but there also could be shifts in the species,” she says. Codfish that live in the eastern Baltic Sea, for example, have already adapted to a habitat with changing pH (because of the region’s notoriously poor water quality), while its cousins in the North Atlantic are in a more stable environment and more sensitive to shifts in pH.

At New Jersey’s Rutgers University, marine ecologist Grace Saba wants to know more about the ecological winners and losers on this side of the Atlantic Ocean. Next month, she is preparing to launch one of the first ocean acidity sensors on an underwater drone that will dive into cold pool of bottom water that sits on the US continental shelf, stretching from Virginia to the tip of Long Island and about 30 to 130 miles offshore. This region is home to commercially important fishes, as well as wild stocks of quahogs, scallops, and surf clams that can’t swim away from growing acidic waters.

“They are just stuck there,” Saba says. The drone sensor will give her and colleagues data on changing water chemistry more quickly than the current ocean acidification testing conducted every four years by NOAA oceanographic vessels. “For me it was an eye opener that we need to get out there and sample,” she says.

From Baltic cod to New England scallops, the ocean ecosystem is changing as we pump more greenhouse gases into the atmosphere. Scientists realize that the ocean doesn’t behave like a chemistry equation, or an algorithm, and they will continue to uncover unintended consequences. Ecological winners will emerge and thrive, “losers” will migrate or die. But by then it may be too late to reverse this global experiment.