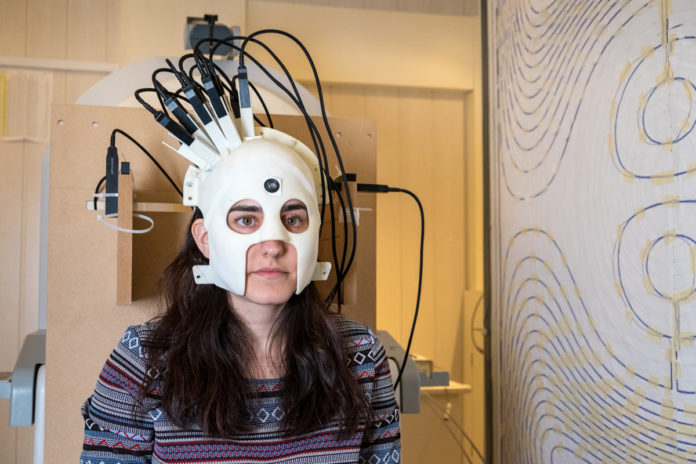 When it comes to observing the inner workings of our brains, there are a few ways we can do it. But, for most, bulky machines and carefully controlled environments are the norm. The traditional trade-off researchers face for a glimpse inside the mind is a mind that’s constrained in some fairly unnatural ways. It can make doing research on how the brain works during basic human activities difficult.

Researchers from the U.K., however, have found a better way to get inside our heads. They’ve designed a helmet equipped with sensitive scanners that they say can precisely monitor the activity of neurons in the brain, while still allowing the wearer to move relatively freely. The device should allow researchers to get much better data on children and those with disabilities, as well on a broad range of activities requiring movement they couldn’t before.

The helmet itself resembles an odd mash-up of medieval and futuristic sensibilities. It covers most of the subject’s head, and thick wires snake from the top, where an array of magnetic sensors is positioned. The sensors pick up on magnetic fields generated by electrical impulses in the brain, which occur when synapses fire. Measuring the strength and position of these magnetic fields allows researchers to see which regions of the brain are activated during particular activities and helps them both to diagnose problems and better understand the overall layout of the brain.

It’s a technique known as magnetoencephalography or MEG and it’s one of several tools researchers use to study the brain. Other common techniques include magnetic resonance imaging (MRI) and electroencephalography (EEG)—there are benefits and drawbacks to each. MEG is attractive to researchers because it allows for more precise imaging than EEG does, and lets researchers pinpoint the timing of brain activity with more accuracy than MRI.

Crucial to the design of the MEG helmet is a new kind of sensor that doesn’t need to be super-cooled to work. Traditional MEG machines rely on magnetic sensors cooled to less than -450 degrees Fahrenheit, and the machinery required to do so makes them bulky and immobile. It also means that the sensors must be kept away from the subject’s head, decreasing the device’s precision. Those getting an MEG must keep very still while the scan is underway — movements of even 5 millimeters can render the results useless. The end result is that scans of people doing normal activities, and of restless children and those with diseases like Parkinson’s, are nearly impossible.

The new sensor, though, is smaller and can be fitted into the helmet. It works by shining a laser through a cloud of heated rubidium isotope atoms and monitoring for dips in luminosity. The rubidium atoms are sensitive to magnetic fields, and they disrupt the laser beam ever so slightly in the presence of magnetism. The researchers published their work Wednesday in Nature.

The magnetic fields our brains generate are miniscule on the order of femtoteslas. They’re several orders of magnitude less than the Earth’s own magnetic field, and it means that protective shielding is needed for MEG machines. To make their helmet work, the researchers’ final design includes a pair of electromagnetic coils that generate a field exactly equal, and opposite to, that of the Earth’s, creating a space effectively without outside magnetism.

With the coils in place, the researchers tested the helmet on people doing a range of motions. This included everything from drinking a cup of tea to bouncing a ping-pong ball on a paddle — actions that would have been unthinkable in a normal MEG machine. Their device’s results were comparable to those from a normal MEG in a side-by-side comparison of more traditional tasks, they say, and should allow for even greater precision because the sensors are closer to the scalp.

The range of motion is still a bit limited — subjects can’t move more than a few inches in any direction, but it’s enough to greatly expand the uses of MEG devices. The researchers suggest that their helmet could, in the future, help to research neural development in children, study diseases involving physical disabilities and observe subject’s brains as they perform natural actions that were impossible while surrounded by the constricting hood traditional MEG machines utilize. This means bouncing ping-pong balls, but also things like the development of motor functions and how they break down in disease.

This New Technology Shows Nurses Where Your Veins Are

GizmoCrazed - November 2, 2014 0
Nurses often struggle to locate the vein before they can draw a patient’s blood. Patients become vary of the fact that their arms needs...