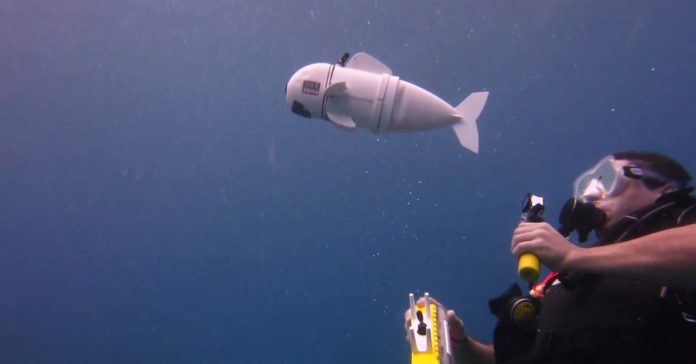 Like a miniaturized Moby Dick, the pure-white fish wiggles slowly over the reef, ducking under corals and ascending, then descending again, up and down and all around. Its insides, though, are not flesh, but electronics. And its flexible tail flicking back and forth is not made of muscle and scales, but elastomer.

The Soft Robotic Fish, aka SoFi, is a hypnotic machine, the likes of which the sea has never seen before. In a paper published today in Science Robotics, MIT researchers detail the evolution of the world’s strangest fish, and describe how it could be a potentially powerful tool for scientists to study ocean life.

Scientists designed SoFi to solve several problems that bedevil oceanic robotics. Problem one: communication. Underwater vehicles are typically tethered to a boat because radio waves don’t do well in water. What SoFi’s inventors have opted for instead is sound.

“Radio frequency communication underwater just works for a few centimeters,” says MIT CSAIL roboticist Robert Katzschmann, lead author of the paper. “Acoustic signals in water can travel for much longer and with much less energy consumption.” Using sound, divers can pilot the robot fish from almost 70 feet away.

Problem two: classical robot electric motors, known as actuators, can be clunky, and the movement they produce can be stuttery. But SoFi belongs to a burgeoning class of “soft robots,” which are, well, generally soft, and use air or oil to locomote.

But SoFi’s tail contains two hollow chambers that a pump injects with water. “All you do is cycle the water back and forth,” says Katzschmann, “and that causes the undulation and the wiggling of the soft tail.” That beautifully natural movement makes for a robot that can swim with the fishes without spooking them. Contrast that with robots that use jet propulsion, which gives a reef collective panic attacks.

Problem three: swimming is energetically expensive. In particular, fish need to hang tight at certain depths, but constantly correcting by swimming up or down is inefficient. So fish have evolved a gas-filled organ called a swim bladder, which allows them to achieve neutral buoyancy. (Sharks, by the way, have massive livers that give them some buoyancy.)

SoFi uses its own swim bladder of sorts, a cylinder that compresses and decompresses air with a piston. On top of that, the machine doesn’t have all the empty, airy chambers a typical robot might. “The compartments that usually would be air-tight, air-filled electronics compartments, we filled with oil,” says Katzschmann. That helps give the robot structural integrity and allows it to reach depths of 60 feet by better controlling its internal pressure.

What the researchers have landed on is a truly fishy robot, both in form and function. And that could be a big deal for fish biologists of the near future. In their initial studies, the researchers found that fish would sometimes swim alongside their robot, all curious-like. “Other times they were not at all distracted by anything, while us as divers, if we would get close to those fish they would just swim away instantaneously,” says Katzschmann.

For the time being, SoFi is remote-controlled. But the idea is that future versions would use machine vision to lock onto individual fish and follow them around, all without raising suspicion. That could help scientists study schooling dynamics, or monitor the health of fish populations in increasingly unhealthy oceans. “It could help us with the problems of fish avoidance and fish attraction that are associated with other forms of monitoring with robots and divers,” says Northeastern’s Hanumant Singh, who develops autonomous underwater vehicles but was not involved in the research.

Bonus: Unlike Moby Dick, SoFi will never turn on its enemies or make us read 600-page novels about itself.

How to Keep Lil Trick-or-Treaters Safe on Halloween Night

GizmoCrazed - October 26, 2018 0
When I think of Halloween, I think of kids outside in the dark. Traditionally, this is the way it works. First, darkness makes everything...

Where top VCs are investing in media, entertainment & gaming