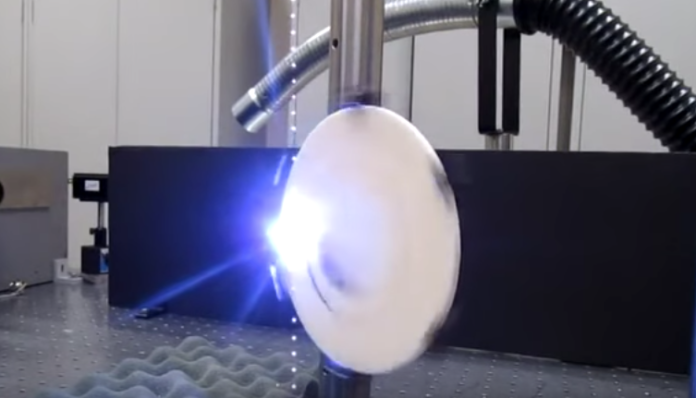 Can you hear me now? Play the video below to see if you can hear a “voice”. (Credit: YouTube/Patrick Tucker/Joint Non-Lethal Weapons Program)

Are you hearing voices? Say yes and many people might question your sanity. But hearing voices is exactly what the United States military hopes will happen with a weapon it’s currently developing.

The Joint Non-Lethal Weapons Program (JNLWD) is building a weapon called the Laser Induced Plasma Effect. Here’s how it works according to Patrick Tucker of Defense One:

“The weapon is composed of two parts: first, a femtosecond laser, which shoots a burst of focused light for 10−15 seconds, just long enough to rip the electrons from air molecules and create a ball of plasma. (Sometimes called the fourth state of matter, plasma is a field of electrified gas, highly responsive to electromagnetic effects.) The scientists then hit that plasma field with a second nanolaser, tuned to an extremely narrow range of wavelengths. They use that to manipulate the plasma field in a way that can produce light and noise. Get the interaction precise enough and you get something that sounds like a haunted walkie-talkie.”

Turn your volume on, but not too loud or you’ll give your ears a shock. Give it a listen (or two).

Frankly, I had to listen to it several times because I couldn’t determine what exactly should be the “voice”. But once I made it through the screech-like sounds, I heard what seems like an extremely muffled human voice. It’s a bit of a stretch, though. YouTube commenters are describing the sound as a broken NES, dubstep and, my personal favorite, a dial-up modem.

Non-lethal weapons are designed to incapacitate targets, while minimizing fatalities, injuries and damage to the target’s surroundings. These types of weapons are used in missions ranging from peacekeeping to full-scale combat. They’re especially useful in urban environments and crowd management.

Within the next three years, the Joint Non-Lethal Weapons Program hopes the device will produce noise, light, and even heat.

GizmoCrazed - June 17, 2016 0
With 14 electric motors turning propellers and all of them integrated into a uniquely-designed wing, NASA will test new propulsion technology using an experimental...