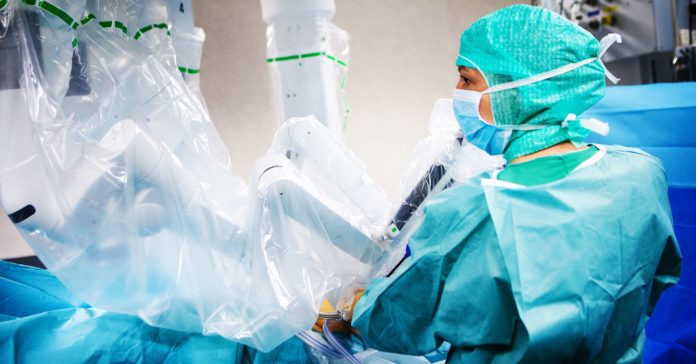 If you think your on-the-job training was tough, imagine what life is like for newbie surgeons. Under the supervision of a veteran doctor, known as an attending, trainees help operate on a real live human, who might have a spouse and kids—and, if something goes awry, a very angry lawyer.

Now add to the mix the da Vinci robotic surgery system, which operators control from across the room, precisely guiding instruments from a specially-designed console. In traditional surgery, the resident gets hands-on action, holding back tissue, for instance. Robotic systems might have two control consoles, but attendings rarely grant residents simultaneous control. According to UC Santa Barbara’s Matt Beane—who recently published a less-than-rosy report on robot training for residents—he never once saw this happen.

Beane judged the state of the field by collecting interviews with surgeons and observations of hundreds of traditional and robotic procedures. (Robots, by the way, are good for things like hysterectomies or removing cancerous tissue from a prostate.) What he found was troubling: During minimally invasive robotic procedures, residents sometimes get just five or 10 minutes at the controls on their own.

“Even during that five or 10 minutes during practice, I’m helicopter-teaching you,” Beane says. “Like, ‘No no no no!’ Literally that kind of stuff. ‘Why would you ever do that?’ So after five minutes you’re out of the pool and you feel like a kid in the corner with your dunce cap on.”

Some medical schools put more emphasis on robotic training than others. But Beane has found that a worrying number of residents struggle mightily in this environment. “I realized, good god, almost none of these residents are actually learning how to do surgery,” he says. “It’s just failing.” Beane reckons that at most, one out of five residents at top-tier institutions are succeeding at robotic surgery.

That’s especially troubling considering that the da Vinci robot, the pioneer in a growing class of medical robo-assistants, has been in service for almost two decades. The benefits of the system are obvious: precision, cleanliness, reduced fatigue. But those benefits only materialize if medical schools are properly training their residents on the system. (Intuitive Surgical, maker of the da Vinci system, declined to comment for this story.)

The da Vinci system is indeed designed to accommodate residents in training, thanks to that secondary console. “The resident will be watching either on a monitor or on the second console,” says Jake McCoy, a urology resident at Louisiana State University. “At some point either the attending decides it’s an appropriate time for the resident to take over, or if the resident wants to speak up and say something, then the resident might get control of the robot.” But McCoy is nearly done with his training, and he says he’s never worked a case from start to finish. “There are certain parts that they just absolutely won’t let me do.”

“I think at this point I’m going to be a little bit hesitant, or at least a little bit wary, to go out and unsupervised do any case that has any bit of complexity,” he adds.

Which is not to say 100 percent of residents aren’t getting fully trained on robotic surgery. “I think we get excellent robotic experience, and I’m very comfortable doing certainly standard procedures and maybe even more complex ones on my own,” says Ross McCaslin, a urologic surgery resident at Tulane. For McCaslin, that competence came in part from doing base-level training in simulators, just like a pilot would, supplemented by real patient experience. (All programs that Beane studied required simulator training.)

Same as it ever was, though. “It’s a dirty little secret, but even when we did open surgery there are residents that are trained better than others depending on what program they’re at and who their mentors are,” says Jonathan Silberstein, chief section of urologic oncology at Tulane.

Good training, whether in open or robotic surgery, requires extreme patience. “Training can slow us down,” Silberstein adds. “It can add significant time to an operation. It certainly increases my stress level, my blood pressure, the number of gray hairs I have. But that’s our duty as physicians who have accepted this responsibility to train the next generation.”

While teaching by way of robotics may have its challenges, it also has its perks. For one, in open surgery, a resident and an attending have literally a different view of the procedure, which gets particularly complicated in a labyrinthine system of overlapping organs. But with the robot, they see the exact same picture through a camera. And after the surgery, the attending can walk the resident through a recording of the procedure, a sort of play-by-play for the operating room.

But residents who aren’t so well-nurtured tend to slip into what Beane calls shadow learning. They go out of their way to load up on simulations, or binge on YouTube videos of procedures. Which seems useful until you consider that attendings notice they’re improving and give them more time at the console at the expense of other residents.

The good news hidden in all of this? Maybe surgery training gaps won’t be a problem for long. “Many of the very advanced surgeons at top institutions that I talked to say surgery definitely has a half-life,” says Beane. “In 50 years we’re going to look back and be like, What? You wounded someone to try to heal them? What?” He’s thinking about noninvasive solutions like nanobots.

The field of surgery was early to the robotics game, and although the da Vinci system comes with serious costs, robotic surgery also means less recovery time and therefore less hospitalization. (Malfunctioning surgery robots, though, have also been implicated in patient injuries.) But the future will see doctors ceding ever more control to the machines, and then the difficulties of training residents will be history. “Maybe this problem is just going to suck for a little while,” says Beane. “And then people won’t do that anymore.”