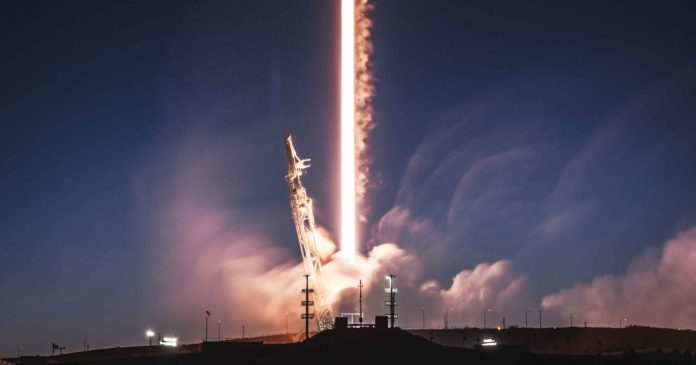 In the early 2000s, Greg Wyler, former founder of a semiconductor company, was laying fiber in Africa. He wanted to do something that mattered. Semiconductors didn’t matter, you know? But linking people to each other and to information did, he thought.

“The lesser educated version of myself said, ‘Fiber is the answer,'” says Wyler. “‘I’ll run it everywhere.’”

He didn’t run it everywhere, though he did run it quite a few places in Africa. “Each connection, each time we connected a school, each time we brought internet to somebody, we saw their lives change,” he says.

In remote parts of the world, like where Wyler was, internet connections often have to come to the ground from geostationary satellites. That’s slow, because geostationary orbit is far away. When kids participated in online classes, by the time the screen showed them raising their hands, the question had already been answered. Unacceptable, thought Wyler.

Wyler went on to found a satellite internet company called O3B, which stands for “the other three billion,” referring to the half of the planet that isn’t connected to the internet. Later, he founded OneWeb, which he hopes—believes, asserts—can “bridge the digital divide,” by launching hundreds of satellites into low Earth orbit.

Wyler and OneWeb are representative of a movement that believes everyone on Earth should have the internet—and that it can come from above our heads, not below our feet. In the past few years, companies new and old have launched into the field, all trying to connect some fraction of our half-disconnected world. Which, historically, isn’t a good bet: Satellite internet providers haven’t had a great run, financially.

And while most of these new players boast humanitarian aims—and that’s surely part of their motivation—it’s not the whole story. The thing is, all those people they want to provide with the internet? They might not actually want it.

The challenge of getting aerial internet up is so great that providers are not necessarily firm yet on what happens when it gets down. For the low-flying satellites to work as intended, companies have to build hundreds (or thousands) of them. Digital delivery systems that fly in the stratosphere, like high-altitude balloons, have to stay aloft and in the right spots. Both are formidable technical challenges, taking years of development.

SpaceX, as usual, has some of the loftiest plans. The company, on its way to developing a satellite communications system for the well-heeled travelers it sends to Mars, will create one for earthlings who want to stay home. Its Starlink constellation, the company says, will eventually have nearly 12,000 satellites—more than have launched in the history of satellite launching—though for now, it has only launched two demo satellites.

In 2015, the year Elon Musk announced the space internet project, SpaceX got a vote of confidence from Google in the form of a $900 million investment—money that some speculate was thrown toward the internet effort. But Google (or, if we’re being precise about it, Alphabet’s subsidiary X) also has its own global internet blueprints: Its Project Loon launches high-altitude internet balloons to the stratosphere, far below the realm of satellites, where the flaccid, floating jellyfish catch a ride on wind currents to their destinations.

Especially hungry, hungry Facebook. In 2013, Mark Zuckerberg announced internet.org, a Facebook-led initiative to provide connectivity to the unconnected. Facebook, in addition to partnering with mobile providers, partnered with Eutelsat to use equipment aboard a satellite to transport internet to Africa—until it exploded on the SpaceX rocket it was supposed to ride into orbit in 2016. Internet.org is also aiming lower, conducting two test flights with drones it calls “Aquilas”. Theoretically, those would help expand coverage beyond the 63 countries where “Free Basics by Facebook” is available—a service that offers limited selections of “news, employment, health, education and local information,” and, of course, Facebook.

Some high-flying space internet companies have no stake in specific websites. Recently de-stealthed Astranis plans to send small satellites to geostationary orbit, and sell bandwidth to internet service providers, which can sell internet to people on the ground. Wyler’s OneWeb will keep its satellites closer to home, in low-Earth orbit, so those kids can raise their hands in class and you can stream Netflix from way-out Ottawa. Its production facility in Florida will churn out its hundreds of satellites—at a rate of around four per day—and its partners include longtime space-internet player Hughes, aerospace giant Airbus, and also Coca-Cola. “We are launching this year,” says Wyler. “When I say ‘launching,’ we’re launching production satellites. No-fooling-around, long-lasting production satellites.”

But the question is whether enough of the world’s unconnected people want all this internet, from all of these companies, and whether these companies are fully considering the financial and social constraints of the developing world. “It’s still very early to say, from a demand perspective, whether there’s enough market to fulfill all of these mega constellations,” says satellite industry analyst Mansoor Shar.

In 2015, Shar participated in a “Space Internet” working group for the Space Generation Advisory Council, which, among other things, represents the perspectives of the younger space set to the UN. And they aren’t sure all those undigitized billions want or are ready to use the hookups these space giants are building. This working group isn’t alone in its thinking. “We hear many times from satellite operators—especially those launching massive constellations—the pitch of ‘connecting the other half of the population,’” says analyst Lluc Palerm-Serra of Northern Sky Research. “But the truth is that, of the total global unconnected population, two-thirds is not connected because they choose not to be connected.”

Now, maybe the internet service they can currently access is too expensive. Maybe people aren’t aware of all the things the internet can provide, like digital doctors and job training. Maybe they don’t have the experience necessary to navigate the web. “Satellite is a great tool to bridge the coverage gap, but it has very little to contribute to these other factors,” says Palerm-Serra.

He suggests that companies could work with the governments, or private organizations on the ground, to educate people about how to successfully surf the net. Some countries have already implemented similar ideas on their own—as with Mexico’s Conectado, Colombia’s Vive Digital, and Australia’s NBN. Companies could also partner with countries to distribute internet through local providers.

But even the best campaigns might only work once people’s basic needs are met. If you’re worried about surviving, getting online probably isn’t top of mind. “Food, water: These are fundamental things that a lot of potential target markets lack,” says Shar. “So I’m not sure they’d be thinking about internet right away.” And even if they wanted it, the target market doesn’t exactly have much disposable income.

The companies could shrink the budget required to lay the groundwork, which can be the most expensive piece of the equation. Palerm-Serra says providers could develop WiFi hotspots so they only need one set of terrestrial infrastructure for a group of people. That hasn’t been a perfect solution in Cuba, though, where people gather around the bit-fueled fire and wait through slow load times. But, at the same time, they do go online. A company named ViaSat has just set up such a system in Mexico and is working on one in Brazil. There’s also Avanti’s ECO, Eutelsat’s Konnect Africa Smart WiFi, and Quika Satellite Wifi.

These programs come not from the firebrand startups or the Frightful Five, but established entities and quieter newbies who perhaps crow less about funding rounds. And the communities they brought this connection to, who might not have had decent internet access before, could be case studies for how newly-connected people use the tool. What do people in a remote village want from the internet? What do they enjoy? How does it help them? The answers, still unknown, are likely very different from what a person in Menlo Park wants. These early connection efforts could inform how the rest of the industry goes about its business.