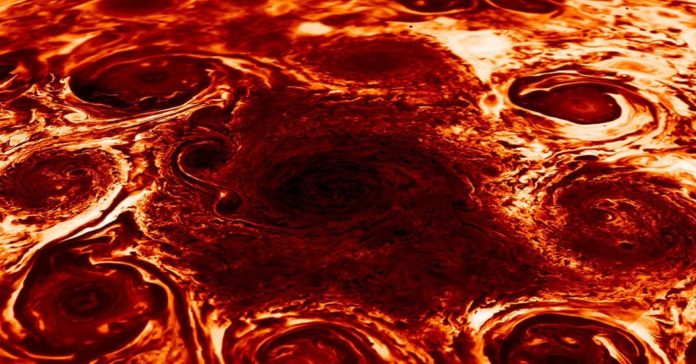 This week belongs to the gas giants in our solar system, but especially Jupiter. This famous planet is huge—so big, in fact, that it could easily hold 1,300 Earths. That’s a lot of territory to cover, so the Juno spacecraft has been working hard to document the planet’s weird weather anomalies since it arrived in July 2016. This week, the Juno team released several papers full of discoveries from its mission so far, and a photo of the north pole that will blow your mind.

Using Juno’s Jovian Infrared Auroral Mapper, the team studies the layers of the atmosphere invisible to the naked eye. Since entering orbit around the poles in 2016, the spacecraft has documented clusters of cyclones, including eight around the north pole. Seemingly, they’re connected by wispy arms, and yet somehow they keep from merging into one massive storm. Luckily, NASA has a well-equipped spacecraft orbiting Jupiter for the next two years; maybe during that time, more of Jupiter’s secrets will reveal themselves. Hopefully, they’ll come with some more spectacular images too.

Still want to hang around the solar system? Check out the full collection here.

How Do Barcodes Work?

This Site Will Let You Ship Your Enemies ‘Glitter’ Anywhere On...

New Analysis of Bone Helps Explain Why It's So Strong