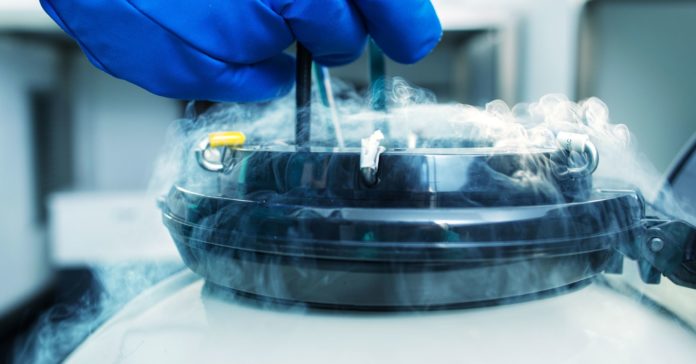 Every day, UPS, Fedex, and DHL deliver about 37 million packages to doorsteps, front desks, and receiving docks across the globe. Along the way each one will pass through dozens of hands as they’re stacked, sorted, and smushed into planes and trucks. That’s why so many of them show up looking a little, well, world-weary. And why some never show up at all.

That’s not such a big deal when the parcel is a holiday ham or your twice-yearly Amazon Prime order of toilet paper. But when it’s a $500,000 vial of genetically engineered, cancer-fighting cells, a safe delivery can mean the difference between life and death.

Last year, the FDA approved the first CAR T-cell treatments—a new class of promising therapies that train the body’s immune cells to seek and destroy cancers in the blood. To work, cells have to be extracted from a patient and shipped to a pharma lab to be modified before being shipped back to the hospital for infusion through an IV. And every one of those treatments makes its cross-country journey inside liquid nitrogen-cooled containers with “Cryoport” stamped on the side. That’s the name of the leader in a cottage medical industry—one devoted to delivering next-generation medicines on time and intact.

With the arrival of gene and cell-based medicines, cryogenics logistics is becoming big business. And no one is a bigger player than Cryoport. The California-based company started out in the reproductive and veterinary sciences space nearly 30 years ago, shipping bull sperm and human eggs and chicken vaccines around the world. Today they’ve quickly become the single largest cold chain provider for immunotherapy drugmakers, exclusively transporting the two newly-approved treatments, and servicing more than 200 ongoing clinical trials. On the day I visited the company’s Irvine, California headquarters, the shipping containers waiting for afternoon pickups sported a line-up of the biggest names in the game: Novartis, Kite, Juno, Celgene, Jannssen, Bluebird Bio.

The ice-cold heart and soul of Cryoport’s main facility is its 15,000 gallon tank of liquid nitrogen, which has to be kept at an extremely low temperature (its boiling point is -320 degrees Fahrenheit). But it’s not as simple as piping the volatile substance into a thermos with the frozen cells. Instead, the company uses a sponge of calcium silicate, which absorbs the gas as the liquid boils off and slowly releases it over two weeks. The liquid-nitrogen soaked sponge gets packed inside a dewar—a pill-shaped super-thermos surrounded by a vacuum. The dewar then goes inside a box or a plastic container, along with a battery of sensors that record real-time temperature, pressure, geolocation, shock, and light exposure of the cargo.

This comes in handy when say, a freight handler puts a shipment of frozen cells on a plane from LAX to Tokyo sideways. Orientation matters because the liquid nitrogen is pulled up by capillary action in the sponge. If it’s not right-side-up, the burn rate skyrockets. Instead of 12 days, now the delivery service only has three. Or imagine if someone drops a tank and the neck cracks, unsealing the vacuum. That starts the clock ticking—they’ve got six to eight hours to save the contents of the container before temps creep above cryogenic levels. Either of those events would automatically flag the company’s data monitoring system: the Cryoportal.

According to CCO Mark Sawicki, those alerts pop up about five times a week. When it does, the company sends someone in to top up the shipper with more liquid nitrogen, or transfer the contents to a new container. “We can’t train every ramp attendant in the world,” says Sawicki. “But we also can’t just send another dose. So we have to use data and design to minimize those risks.”

Cryoport’s shipping containers are designed to discourage stacking and tipping. Their bases are wide and heavy, like one of those roly-poly toys you can’t knock over. And their tops are a convex mound, like a mushroom cap, so you can’t pile anything on top of them. Still, the people who pack them into trucks and planes find ways to do both.

So the company’s engineers are working on new ways to design around human error completely. They recently patented a completely spherical dewar that uses gravity to constantly orient itself correctly inside a protective, crate-like matrix. Someday, these floating, frozen orbs carrying cancer cures could be riding right alongside your weekly Blue Apron order. So be nice to your UPS or FedEx driver. They might be saving lives.

GizmoCrazed - May 30, 2018 0
Snap CEO Evan Spiegel spoke a bit about some of the cultural issues at the company, going public and competition with Facebook at Recode’s...

The Quest to Make Super Cold Quantum Blobs in Space

Researchers find the best way to press a button