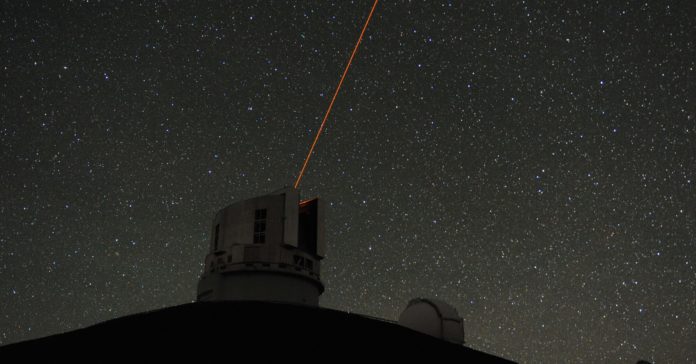 In October 2013, a moon-orbiting NASA spacecraft aimed a laser beam at Earth, 239,000 miles away. Within seconds, the intended recipient—an observatory in New Mexico—locked onto the beam of infrared light, invisible to the naked eye. Encoded inside the light was a high-definition video of NASA administrator Charles Bolden delivering a short speech.

Bolden had, of course, recorded the video on Earth. NASA had first beamed the video up via laser link to the spacecraft, which beamed it right back down. “We’re making a leap in space communications ability that is unmatched in NASA’s history,” Bolden proclaimed in the video while flanked by US and NASA flags. It was—and still is—the furthest anyone has ever beamed an infrared laser message.

But engineers at NASA, the European Space Agency, and private companies like Airbus are preparing more ambitious laser communications projects in the next few years. They think that lasers—not radio—are the future of space data. If they have their way, the data that creates your snowstorm forecasts and Jupiter photos will rain down from the sky in the form of infrared light.

Right now, climate-monitoring satellites, the International Space Station, and space-faring probes like Juno all send and receive information in the form of radio signals. But these spacecraft can only use a limited range of government-controlled radio frequencies. For the amount of satellite and space imagery that scientists want, they need more data delivery options, says engineer Frank Heine of Airbus-owned company Tesat-Spacecom.

Heine is gunning for infrared lasers. He works on the European Data Relay System, a hybrid network of radio and infrared-delivering satellites operated jointly by ESA and Airbus. In the network, satellites in low Earth orbit—some 400 miles above Earth—ping infrared data up 22,000 miles to a geosynchronous satellite. The sat then converts that signal into conventional radio waves to beam down to Earth. The satellites deliver ocean, atmosphere, and other environmental data for Europe’s government-run Copernicus program.

They’ve been able to achieve 1.8 gigabits per second, about three times faster than a purely radio connection. Although they’ve demonstrated direct infrared links from space to their observatory in Spain, it’ll take them another five to 10 years before the downlinks to Earth are consistently in infrared, says Heine. They have to build more ground stations so that the satellite network is always within communication distance—but they still have to figure out how many they need and where to build them.

Infrared is faster than radio because you can cram a lot more data in it, says NASA engineer Don Cornwell, who managed the lunar laser demonstration. At its fastest, NASA’s moon-to-Earth laser connection delivered 622 megabits per second—the equivalent of streaming 30 HD movies on Netflix simultaneously.

As an added bonus, governments don’t strictly regulate infrared signals like they do radio. This isn’t just because infrared is a newer technology; radio needs regulation because the signals sprawl. A signal sent from low Earth orbit can cover several thousand square miles, and if too many people are using the same channel, the signals overlap and interfere. In contrast, lasers cover a much smaller area: A laser beam from the moon covers just about 15 square miles. “You have to work really hard to point them at each other to interfere with each other,” says Cornwell.

It also takes less power to send a laser signal than a radio one. The laser delivers information like a syringe, whereas radio sprays like a garden hose. The infrared transmitter at the moon needed less than 50 times the power a radio transmitter would use, says Cornwell.

But the narrowness of the beam presents engineering challenges. One of the most complicated steps is aiming and receiving the beam. NASA’s lunar spacecraft stabilized itself with anti-jitter capability, not unlike the mechanism behind noise-canceling headphones, says Cornwell. Because both ends of the laser connection are moving with respect to each other, a spacecraft beaming a laser has to aim where Earth will be. “It’s like a leading receiver in football,” says NASA engineer David Israel, who is leading the effort to launch an infrared laser system on a satellite next year. This project, called the Laser Communications Relay Demonstration, plans to beam infrared lasers at observatories in Hawaii and California at 1.2 gigabits per second.

NASA wants to use the infrared links to send information to astronauts. “The ability to stream HD video to deep space is a big deal,” says Cornwell. Astronauts could receive their latest mission instructions via a YouTube video, he says, or even get remote medical checkups.

On Earth, science research will benefit, says engineer Bryan Robinson of MIT Lincoln Laboratory. Once scientists can get their data faster and in larger quantities, Robinson thinks that they will feel freer to design more ambitious experiments. He’s worked with scientists who study the oceans and atmosphere using satellite data. “Right now, they start their experiments assuming, ‘I can only get this much data down; therefore I need to design my instrument this way, and I need to operate it in this way,’” he says.

It took 25 years for Hubble Space Telescope to send down about 100 terabytes of data. Imagine if the telescope could send all those images down in a matter of days, says Robinson.

He’s outfitting a small satellite, the size of a loaf of bread, with an infrared laser system capable of delivering 200 gigabits per second. The NASA-sponsored project, called Terabyte Infrared Delivery, is scheduled to launch in 2019. This system, they’re hoping, will be cheap enough for scientists working on a single project to purchase themselves. “Because the system is so small, it can be low cost,” says Robinson. Presumably, the researchers will find something more useful to transmit than pre-recorded talking heads.

Correction at 8:45 a.m. on 2/28/2018: An earlier version of this story incorrectly stated the ground stations for the lunar demonstration and the Laser Communications Relay Demonstration.

A Freaky Humanoid Robot That Sweats as It Does Push-Ups

GizmoCrazed - December 28, 2017 0
Continuing their quest to make me feel even worse about being a lazy human, robots can now do sit-ups and push-ups and something called...

Apple’s Thanksgiving ad is mostly about the AirPods

Chinese company claims its ‘laser AK-47’ can set you on fire...