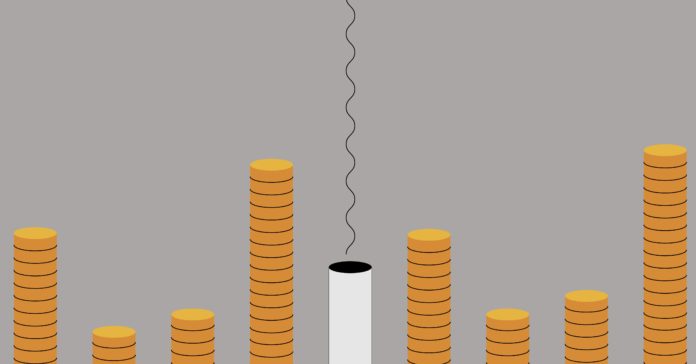 Fixing the effects of climate change on Earth isn’t complicated. When you get down to it, all we humans need to save the world is ingenuity, grit, cooperation, and $53 trillion.

Where is humanity supposed to come up with that kind of cash at this time of night? The International Energy Agency says Earth needs those trillions invested in energy supply and efficiency by 2035 to keep global warming below 2 degrees C. So, you could tax greenhouse gas emitters until they cry—oh, sorry, I probably meant to say “price carbon according to its real market cost.” But also, go to where the big money is—statewide or national funds, piles of assets emblazoned with names like BlackRock and Fidelity, and other institutional investors. Convince them to stop investing in carbon emitters and start investing in… anything but them.

Except, whoa there, li’l Communist, because the people who run those funds are bound by a fiduciary duty to act in the financial interests of their clients. Which is to say, legally and regulatorily, they can’t not make money—at least, not on purpose. And if you compare an asset portfolio optimized for “make all the money” to one optimized for “make all the money except if it emits carbon,” guess which one wins? “So how can we move the majority of investors to integrate environmental factors into their thinking?” asks Soh Young In, an engineering doctoral student at the Global Projects Center at Stanford. “That’s the problem. They think that environmental factors are a suboptimal decision.” In a new working paper, In and her fellow researchers hope to convince those skeptical investors otherwise.

Finance researchers and analysts have been chewing on this problem for years—how (and whether) to integrate environment, social, and governance factors, or ESG, into investment planning. Stipulate that the right-thinking humans who work in finance know climate change is an existential threat; what they don’t know is how to put that knowledge to work without sacrificing money. So lots of folks have tried to show that taking ESG into account can increase investment returns (as well as, like, save the planet or whatever).

Research into the “G” part has shown that, yes, companies that perform well on metrics for corporate governance—essentially how well a company is run—have also performed better on the market. “S” looks pretty good, too, if you look at how happy workers are. Companies with higher worker satisfaction have also done better. It’s hard to tell if those trends will continue, but at least retrospectively, it’s good stuff.

But what about the E? “The E, the jury is still out on,” says Adair Morse, a finance professor at UC Berkeley’s Haas School of Business. In part, the problem may be a lack of data. Despite various projects to mandate environmental disclosures and to try to collate that data into useful metrics, those metrics are still hard to come by. Determinations of what constitutes fiduciary duty have been a decades-long process.

People touting ESG ideas argue they can have as much of an impact on bottom lines as supply chains, market size, raw material availability, and all the other stuff finance people worry about. “This movement said, look, these things are relevant for shareholders and pricing,” Morse says. “So shouldn’t we have information that’s material in the ESG factors? Shouldn’t they be disclosed?”

When they are, investors have something to act on—like Moneyball, but for money. “Portfolio managers tend to be quantitatively focused. They’re used to relying on a suite of financial data about companies and asset classes that appear on the Bloomberg terminal,” says Chris Davis, senior director of the Ceres Investor Network, a group of 150 pension funds and asset managers collectively responsible for $27 trillion. (See? I told you somebody had the money.) And Bloomberg data, for example, does indeed now include ESG metrics.

That swings us back around to In’s research. To be clear, it’s a working paper, not peer reviewed—intended, as she says, to be the beginning of a discussion and not the end. What her team brings to bear is access to a database from a company called Trucost. Established in 2000 to develop those quantitative metrics, Trucost has been tracking carbon emissions since the middle of the last decade—and not just a company’s emissions at the end of its line, but all up and down the value chain, from raw materials to transportation to the places that cough out the widgets.

So this is pretty slick, actually. In’s group took a firm’s Trucost carbon emission data and then divided it by the firm’s revenues to come up with a metric they call “carbon efficiency.” Then they used those numbers to build carbon-efficient and carbon-inefficient portfolios, and compared their returns. “It’s an investment strategy,” In says. “You’re shorting your carbon-inefficient firm stocks and longing your carbon-efficient firm stocks.”

Whoo, did that ever work. Depending on how they constructed the portfolio, from 2009 to 2015 profits ranged from 3.5 to 5.4 percent over what you’d expect from similar levels of risk, ignoring carbon. And according to their analyses, the numbers held even when they controlled for other things that often drive profits—size, value, momentum, and so on.

“So we can say we’re getting alpha on our portfolio. But we want to know why this is happening,” In says. More variables, more regression analyses. “What we find is, carbon-efficient firms tend to be good firms in terms of financial performance and corporate governance.” In other words, low-carbon firms tend to be good at other stuff, too. That’s a correlation, not a causation, but it’s also a rational, fiduciarily responsible way to build a portfolio.

This is good news! “From casual conversations with investors managing institutional portfolios, they were very happy to see this kind of academic research,” In says. They’re looking for ways to see so-called green investing as within the scope of their duty. “If they want to change their portfolios, they need to have objective evidence.”

In the case of In’s working paper, that’s evidence added to a growing canon. “There are leaders and there are laggards. In our investor network, many if not most of the members, particularly the pension funds, take climate risk very seriously,” Davis says. “A number of them have done quite a bit already in reducing the carbon footprint of their portfolios and investing affirmatively in solutions.”

For example, the $209 billion New York State Common Retirement Fund audited its portfolio’s carbon footprint, says Davis, and then had the investment bank Goldman Sachs build a bespoke low-carbon index …and put $4 billion into a fund based on it. The California State Teachers’ Retirement System put $2.5 billion into its own low-carbon index fund. The next step: “Get some quantitative criteria that can be used in risk models,” says Davis. “There’s a lot of research going on with the likes of BlackRock and State Street to try to figure out just that.”

The research comes in the nick of time, if not slightly after. Not everyone thinks fiduciary duty and lack of metrics are as much of an obstacle as US investors seem to. “That data’s not perfect, but there’s sufficient data to know what the emissions profile of fossil fuel assets is, and there’s sufficient data to know what the storm risk for infrastructure and physical assets is,” says Nathan Fabian, director of policy and research for Principles for Responsible Investment. “It might take a bit more effort than simply using the portfolio return numbers or company earnings numbers you’ve used for the last decade, but the truth is, all the risk is in front of us, not behind us.”

The 1,700 signatories to PRI’s standards for ESG-based investing collectively manage $62 trillion. That’s a lot of oomph if someone could point it in the right direction. And in lots of places, people are. “The truth is, most of the markets of the world are just far more comfortable with where the investment risks and opportunities are going to come from than US regulators and the US financial sector,” Fabian says. “That’s a real competitive issue for the US over time.”

This week, Fabian says, the European Union plans to update rules to clarify how fiduciary duty can incorporate environmental, social, and governmental issues. The Chinese government is setting its financial system up to encourage green financing. “You’ve got Europe moving aggressively, China moving aggressively, and the Californians trying quite hard. But really there’s a drag on the US economy,” Fabian says.

The In team’s working paper doesn’t solve that problem. The relatively short timeframe of the Trucost database, for example, makes for a bit of a frowny face; her group hasn’t yet gotten all the data for 2016 to see if the trend continues. And the correlation between carbon efficiency and governance and performance means you have to ask what’s actually driving that performance—governance, revenues, or carbon? But something has to convince firms to get on board a transnational movement. The journey of $53 trillion must begin with a single step.

GizmoCrazed - March 15, 2016 0
The future heralded by driverless cars promises to be safer - mostly - but also, probably, a lot more boring. If Ford has any say...