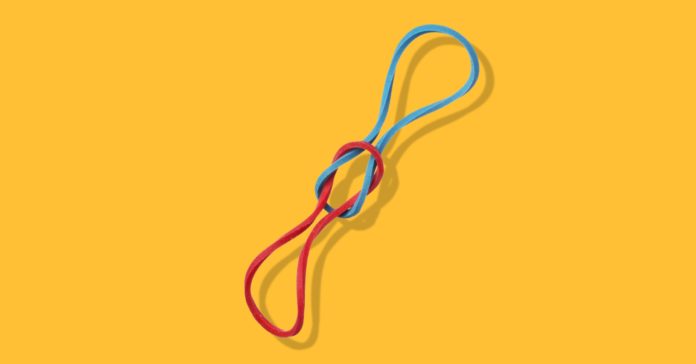 How much energy can you store in a rubber band? Obviously, the answer depends on the size of the rubber band.

Let me start with a simple rubber band that I will stretch. The cool thing about rubber bands it that they are mostly like an ideal spring—but not exactly. Both springs and rubber bands have a special property: It takes more force to stretch them the farther you pull. Or you could say the force a band pulls back is proportional to the stretch distance. This proportionality constant is called the spring constant and is represented by the symbol k (in units of N/m).

The energy stored in a spring depends on both the distance that it is stretched and the spring constant with the following relationship.

So, I just need to see if a rubber band is “spring-like” and then measure the spring constant. How about some real data on a typical rubber band—one you might find in your desk drawer or that one holding all your pencils together.

You can see that this mostly looks like a linear relationship between the stretch distance and the force (just like a spring). The slope of this line would be the spring constant with a value of 90.8 N/m. This means that if I stretch the rubber band a distance of about 20 centimeters (that’s around the breaking point) then there would be 1.8 Joules of energy stored in it.

However, if the spring doesn’t stretch then it’s pretty hard to measure the spring constant—so I will just do something else. If I measure the torque required to twist the rubber band I can do something very similar to the linearly stretched rubber band. In this case, I can measure the twisting torque with a force probe placed a fixed distance from the axis of rotation. Here is my plot of torque vs. rotation angle.

This looks like a fairly linear relationship—just like the stretching vs. force. The slope of this line shows the relationship between twisting angle and torque—I will call this the rotational spring constant (kr). For this rubber band, I have a rotational spring constant of 3.68 x 10-5 Newton*meters. Now I can calculate the total energy with this expression (you can derive this for homework).

So, how much energy can I store in the rubber band this way? I can twist the rubber band through 100 revolutions without breaking it (it broke at 111 rotations). This would be a total energy storage of 7.2 Joules. That’s odd. It seems I can store more energy by twisting rather than stretching.

What happens if you use a giant rubber band? I found this super sized rubber band in the office (no idea what its purpose is). Let me quickly repeat the energy density calculation just for comparison. Here is a plot of the twisting torque vs. rotation angle.

The rotational spring constant for this thicker band is not surprisingly higher than the normal sized rubber band, with a value of 4.92 x 10-4 N*m. If I assume that I could also rotate this one 100 times, it would have an energy storage of 97.1 Joules. Of course it stores more energy, but it also has a greater volume. After measuring the dimensions and calculating the volume, I get an energy density of 6.4 MJ/m3. That’s right around the same energy density as a small rubber band. I think that’s pretty cool. Maybe I need to repeat this measurement for all sorts of rubber bands. Or maybe I could just leave that up to you for a homework assignment.