How Cannabis Tech Can Help Build a Better Cup of Coffee 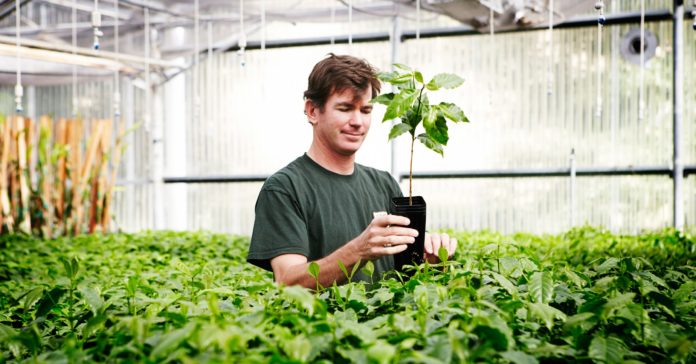 In the hills near Santa Barbara, something funky is growing. No, it’s not the newest strain of bubba kush. It’s coffee, sprouting farther north than it should be. Coffee belongs in the tropics—it doesn’t like cold snaps. But here at Frinj Coffee, a special variety called geisha flourishes.

And it’s about to get a whole lot more special—thanks, actually, to cannabis. Front Range Biosciences, which produces marijuana plants free of viruses and bacteria, is branching out into other crops like coffee, today announcing it would provide Frinj more than 3 million plants (technically known as “rooted cuttings”) over the next four years. Using this “clean stock” technology, Southern California could soon be green with coffee engineered in the lab to be healthy and productive. It’s just another odd way the booming cannabis industry is having downstream effects on other crops—starting with coffee, and possibly following up with crops like bananas and sugar and hops.

Growing cannabis isn’t a particularly drawn-out process. After perhaps half a year, you harvest the whole plant and you’re done with it. But during its short life, cannabis can fall victim to nasties like fungi and viruses. This is especially precarious if you clone your crop—that is, identify a particularly productive or potent plant, take tissue samples, and grow them into their own plants. Clone a seemingly healthy yet afflicted plant and you’ll end up with a worthless greenhouse.

That’s why, in August 2016, Front Range Biosciences began developing a method of tissue culturing that avoided all these problems. When it takes samples of cannabis, it makes sure the stuff is free of bacteria and viruses, growing the little plants in their own containers, feeding them the right nutrients and amount of light.

“You can control certain processes through hormones, like rooting or shooting or elongation,” says Jon Vaught, CEO of Front Range. “It’s really like a manufacturing process for plants. You don’t have to deal with pests, so you don’t have to use pesticides. You control your environment.” The client then takes these wunder-plants and raises them in a greenhouse, where they grow with a good head start.

The same process, it turns out, can work on coffee. Though Frinj isn’t worried about local Southern California maladies affecting its plants. “We’re at an advantage here in California in that we have no traditional diseases that the coffee regions have,” says Jay Ruskey, CEO of Frinj. “It’s our responsibility to get plant material that has no diseases and keep it that way. The clean stock program will help us ensure that.”

What Frinj is really concerned about, though, is the precious genetics of its California-loving plants. Namely, it wants to know what it’s planting. Traditionally with coffee, you take seeds from a plant you liked for its growth or production or the tastiness of its beans, then spread those seeds. But that’s not exactly exact. “You get a certain tree of a certain variety, but there’s a 5 to 15 percent chance that there was some wind pollination from other trees, or some cross pollination, and so that seed stock has this ability to begin to naturally hybridize,” Ruskey says.

With plants in the lab, though, Front Range can culture the tissue over and over and over, churning out genetic copies. (A coffee plant produces around 1,500 seeds, but those seeds don’t keep very well.) Front Range is working with several varieties of Frinj’s coffee, and can thus begin to build a database of the choicest coffee plants for future use. That means its geisha varietal, which grows so well in this less-than-tropical climate, won’t get bastardized by accidental cross-pollination.

Now, this does introduce some potential problems. Genetic diversity is generally good; the coffee trees in a traditional plantation aren’t all identical, so while some may fall victim to a certain disease, others may have the lucky genetics that makes them immune. These survive, and the crop doesn’t entirely fail. But when you lose genetic diversity, you run the risk of losing a whole bunch of plants.

“That’s the tradeoff you get,” says Vaught. “There is some risk associated with just having lots of the same one, but at the same time it’s worth it. We can keep tens, hundreds, thousands of unique varieties safe and sound, so that if you did have something that got wiped out, you could go back and deploy it.” It’s like a seed vault—only instead of seeds, it’s preserving tissue.

Beyond coffee, hypothetically labs like Front Range can build databases of other crops like berries and pineapples.

With the continued march of cannabis legalization across the US, expect a downpour of money to supercharge the cultivation of the crop. And advances here will in turn help advance agriculture as a whole. “The emergence of a new high value crop like cannabis opens opportunities for innovation and improvement,” says Vaught.

Yet another reason to end the prohibition on cannabis. Do it for the people, if not the plants.

—Hey, don’t ever, ever drive stoned, even if no gadget can prove exactly how stoned you are.

—Want to know the dirty secret of cannabis cultivation in California? It’s dirty.