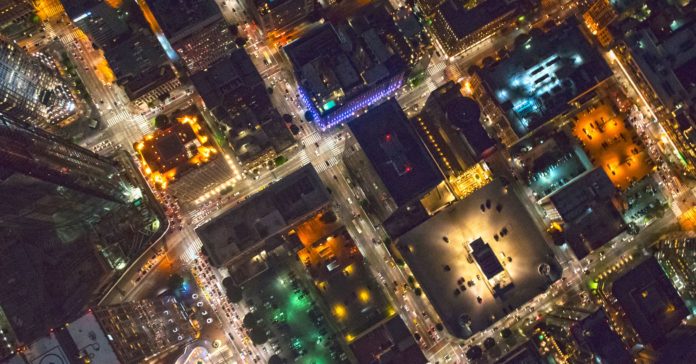 “Want to come to a quantum computing party?”

I wasn’t expecting the question. My brain was hurting: I’d just finished an hour-long interview with Jarrod McClean, a Google quantum computing scientist, and I was mentally planning to write up my notes. His talk had caught my attention the day before: McClean spoke animatedly, bobbing a magnificent head of shoulder-length ringlets, as he pointed at equations and diagrams on a PowerPoint presentation. His audience consisted of a room full of physicists at the American Physical Society March meeting, the largest physics conference in the world, and I was there to write for the organization’s newsletter. The first quantum computer algorithms, McClean told me, will simulate progressively more complicated molecules with the goal of eventually discovering new useful materials.

Sure, I thought, I could do with some lighter chitchat. McClean dug around in his backpack and handed me a postcard with a spiky black ferrofluid droplet splattering onto itself. Above the droplet, the words: “Google Quantum AI Party. Thursday, March 8, 7:30 p.m. Rooftop, Standard Hotel.”

It was easily the most glamorous physics party I’d ever set foot in—and elaborate by non-physics standards, too. Surrounded by an open-air view of the LA skyline, the venue had two open bars, fake plants bent to resemble larger-than-life cats, and a sprawling table of finger foods. Performance artists slinked by in pairs, draped in what looked like long beige curtains embroidered with red flowers. They did not respond to questions. Next to the waterbed pods, a small gang of researchers huddled over a laptop, trying to hammer out the next day’s PowerPoint slides.

“This would’ve been unimaginable five years ago,” said physicist Stephen Jordan, a Microsoft researcher I ran into near the elevator. “We didn’t have the money or the attitude.”

They certainly have the attitude now. Last year, the big names in quantum computing—Google, Intel, IBM—announced new technology milestones every few months. In November, IBM announced a 50-qubit quantum computer. Last week, Google announced a 72-qubit one. At the party, Google physicist John Martinis, who heads the company’s quantum hardware division, told me he thought they were getting close to “quantum supremacy”—meaning that they could soon execute an algorithm that classical computers can’t. Companies and academics want to scale up these machines further, even discussing how they could build them with existing silicon chip manufacturing technology, says physicist Mercedes Gimeno-Segovia of the University of Bristol.

A grad student told me he’d attended two other posh quantum computing parties in the same week—one thrown by IBM, and the other by Bay Area-based Rigetti, which produces quantum hardware and software. “IBM commissioned a cocktail called ‘gin entanglement,’” said Edward Leonard of the University of Wisconsin-Madison, referring to one of the mechanisms by which qubits compute in a quantum computer. But, you know, with elderflower liqueur instead of superconducting circuits. “It was good,” he said. “A lot like a gin and tonic.”

But the celebrations may still be premature. At the conference, attended by some 11,000 people, several presenters were careful to point out that quantum computers will need around a million qubits before they’re broadly useful—far more than Google’s 72, putatively the reason for its shindig. Right now, scientists are still testing that their quantum computers work, which means they have only been implementing simple algorithms. For example, researchers at Google and IBM have simulated small molecules like hydrogen that physicists already understand well. Intel researchers are preparing to simulate very specific, well-studied phenomena that occur in groups of electrons. McClean’s algorithms require the use of both quantum and classical computers to achieve accuracy.

I spotted McClean, whose hair was visible from across the party. “Have you seen the performance artists?” he asked me. It was difficult to miss them. One performer—a woman named Yozmit, who would later serenade us in a deep, resonant voice—was wearing a clear helmet adorned in LEDs. “This party is very Hartmut,” McClean said. “The performance artists are his personal friends.”

Next to the bar, there he stood: Hartmut Neven. A physicist who manages Google’s Quantum Artificial Intelligence Lab, Neven had organized the event. He was dressed for the occasion: a black blazer with a slightly popped collar, brightly colored sneakers covered in spikes, and a pair of sunglasses perched above his forehead.

“I picked geeky things that I thought physicists would appreciate,” he told me, beaming, while waving a half-drunk cocktail in the air. “That’s why there are the lasers”—he pointed to a projection on wall—“and live analog music.” I spotted a man playing what appeared to be a double-barreled electronic recorder in the corner. Another musician was playing ethereal synthesizer sounds.

“You’ve got to be high to appreciate this,” someone said.

Gimeno-Segovia walked toward me, holding a free T-shirt she’d just claimed. I asked for her thoughts on the decorations. “I think this is is supposed to look like entanglement,” she said, pointing at a projection of knotted lines on the wall that resembled a Windows 95 screensaver. On another wall was a projection of repeating geometric shapes like a kaleidoscope. “I’m not sure how they relate to quantum computing,” she said. “You should go interview Hartmut.”

Few people seemed to understand what the party was about. Which wasn’t so different from the conference itself, where physicists with PhDs freely admitted that the jargon-laden presentations they’d just attended were incomprehensible. That’s not atypical for this complex field, which ranges from quantum physics (understanding the mechanism of the computer) to engineering (how to make the computer) to software design (a whole lot of math).

So why exactly are they so excited about quantum computing right now? It will be years—decades—before any quantum computer becomes practically relevant. Existing quantum computers can’t correct their own errors. Microsoft’s quantum computer designs are made from microscopic objects called anyons that don’t conclusively exist. They’re not sure what the computers will be good for—but they will obey quantum mechanics, a fundamentally different set of rules than the ones we’re used to in electronics, which means, potentially, it can solve a fundamentally different set of problems. At the very least, the party did translate the excitement into a language we can all understand: an open bar.