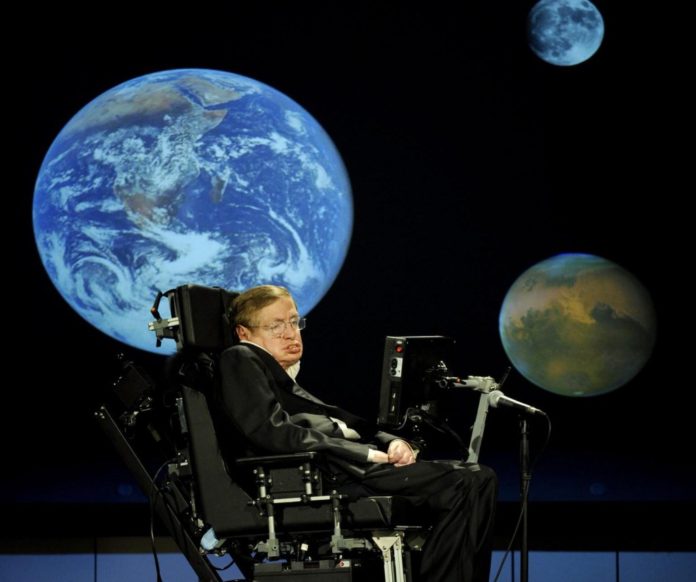 In 2008, Stephen Hawking delivered a lecture on “why we should go into space” in honor of NASA’s 50th anniversary. (Credit: NASA/Paul. E. Alers)

When I look at the night sky, I often view the stars not just in space but also in terms of their places in time. Light moves at a finite speed (299,792 kilometers per second, to be precise), so the journey from star to star is a very long one even for a beam of light. When astronomers talk about light years of distance, they are literally describing the number of years it takes for light to travel from those distant stars to your eyeball.

And so when I heard about the death of Stephen Hawking, I couldn’t help thinking about his place in the stars. At some distance from Earth, there is a star whose light (as seen right now on Earth) started its journey at the time when you were born. You can think of that as your birth star. We all have one. Hawking has one–and you can easily see it. His birth star is shining brightly in the evening tonight.

Look high in the south after the end of twilight and you will see the prominent bluish-white star Regulus, the brightest star in Leo (the lion). It shines at the base of a grouping of stars that form a pattern resembling a backwards question mark. In mythology, that pattern is commonly viewed as the outline of the lion’s mane and chest. To Babylonian astrologers, Regulus was the “King Star,” marking the heart of the great beast.

The light you see from Regulus tonight started on its journey to Earth right around the time Stephen Hawking was born. Put another way, if alien astronomers on a planet orbiting Regulus had access to a fantastically powerful telescope that allowed them to watch human affairs on our world, they would just now be witnessing Hawking’s birth.

(Actually, the timing is just a little off. Revised measurements show that Regulus is slightly more distant than previously thought, 79 light years away. That means our hypothetical aliens would be seeing Earth as it was three years before Hawking was born. In three years, they would get to witness his birth, and after that the slow unfolding of his remarkable life.)

If you are more than four years old, you too have an equivalent birth star: a star whose distance in light years roughly matches your age in years. For me it’s Castor, one of the “twin” stars in the constellation Gemini, not far from Leo in the sky.

You can find your own by scanning the list below and finding the star whose distance is closest to your age. That is your birth star, the place where the all-seeing aliens would just now be getting news about your entry into the world. (A caveat here, too. The list is based on an older version of the Hipparcos star catalog. Recent revisions mean that some of the star distances are probably off by a few percent, but the numbers are close and the overall concept is still spot-on.) 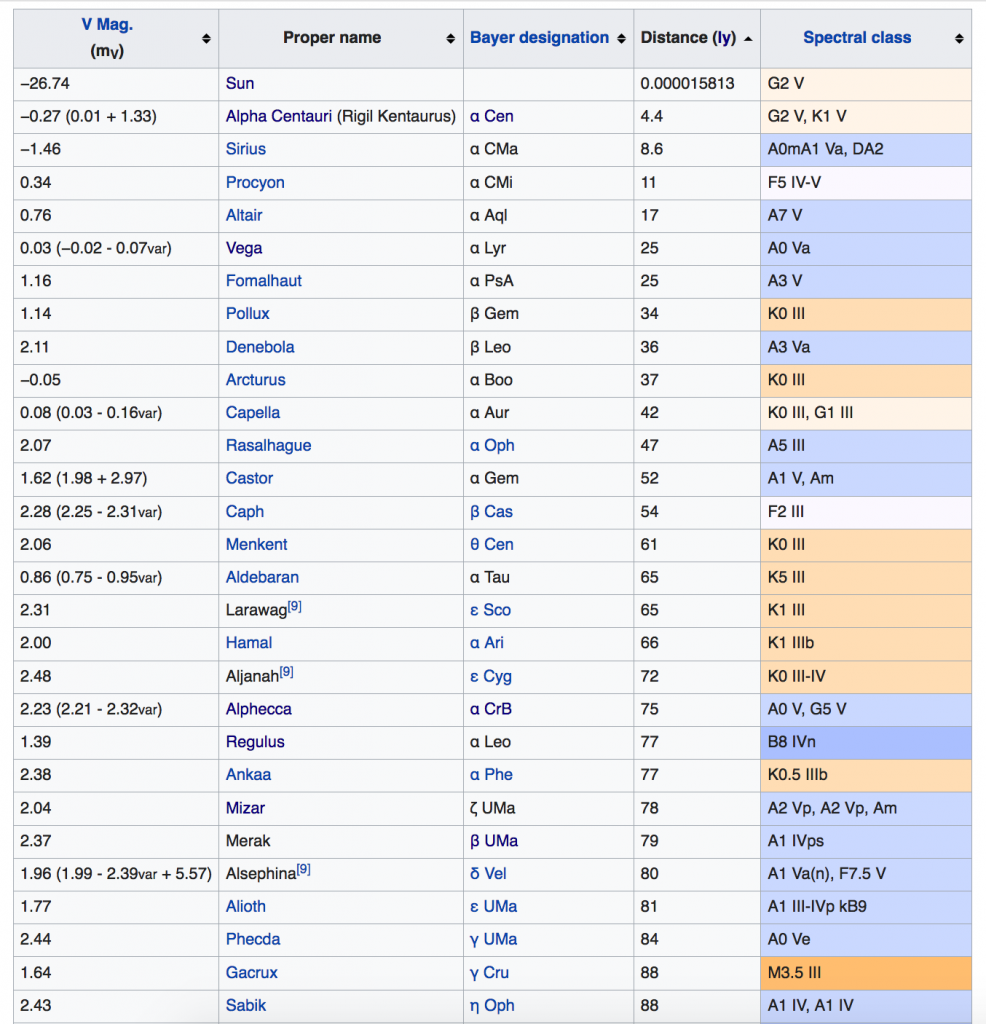 A list of all the bright stars (greater than magnitude 2.5) located within 90 light years of Earth. Look at the distances in the fourth column and find the one closest to your age. You can find the original version of the list here. (Credit: Wikipedia)

All of the stars on the list are bright enough to see with the naked eye, and most of them are visible from the northern hemisphere. You might need to refer to a sky map, and you might need to wait until the right season for your star to come into view. When that happens, though, you get to experience a special kind of connection to the universe.

The photons of light from that star are the same age as you are. You have both been traveling on your life journeys for the same length of time—one of you streaking electromagnetically through space, one of you living a biological life on Earth, both of you the end products of fusion reactions between atomic nuclei.

Another distinctive aspect of your birth star is that it keeps changing. As you get older, the distance corresponding to your age keeps migrating farther and farther from Earth. It sweeps past ever-more distant locations, and so you keep migrating down the list of bright stars. 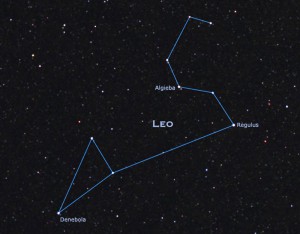 Regulus, the bright star in the constellation Leo, lies on the outer boundary of Stephen Hawking’s information bubble. (Credit: StarryNight)

I suspect that this way of looking at the sky would appeal to Stephen Hawking, whose ideas were so strongly tied to novel ways of thinking about black holes, the fate of information, and the nature of time. His life bubble is now 76 light years out into the universe. His death bubble has just formed; see this beautiful memorial by Sir Martin Rees.

The part of the universe that could know Hawking ever lived will keep expanding at the speed of light forever. The information that he existed, and the information encoded in all the profound ideas that he has contributed to the world, will not be lost; Hawking’s own theories support the idea that quantum information cannot be destroyed. So it will all survive, and his life bubble will keep expanding.

We all have our birth stars, and we all have our corresponding information bubbles going out into the galaxy. Someday, perhaps physicists will achieve a true understanding of what happens at the event horizon of a black hole. Perhaps they will figure out whether the Big Bang really emerged from a timeless state that had no beginning, as Hawking theorized in his “no boundary” proposal.

Then those answers and those ideas will form bubbles of their own: more information racing out into the universe, chasing the boundary of Hawking’s own life. 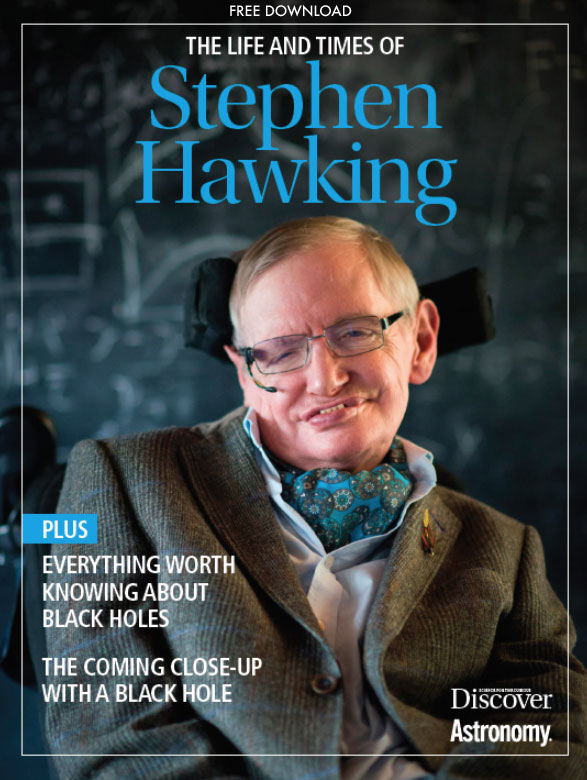