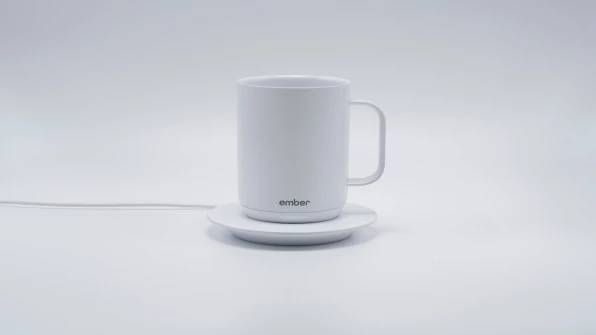 Enjoying coffee at the optimal temperature is one of those non-trivial dreams for almost everyone. Image a scenario where you wake up and the coffee is ready for you in the temperature that you prefer.

It is a gorgeous smart cup which can be controlled by a smartphone and can deliver the right temperature to lift your spirits up.

Ember Mug is a smartphone-controlled mug and it can hold up to 8 ounces (236.6 milliliters) of liquid. It is built with heating components which could keep the liquid inside the mug at the preferred temperature of the user.

What comes along with it?

Ember Mug comes with a box containing a recharging saucer and AC adapter. The mug weighs 0.75lbs and is capable of handling temperatures from 120° F to 145° F. It is IPX7 certified which means it can be submerged underwater up to 1 meter (3.3 feet).

It has dimensions of 4.2 x 3.25 x 4.3 inches and people can mistake it for an ordinary mug, as it made has a ceramic-reinforced coating and appearance of a regular coffee mug. It has a firm and grippy bottom along with two gold rings. The power button is also placed at the center of the bottom. The saucer has two golden pins in its dip and this facilitates the flow of electricity to the mug’s battery.

The two gold rings are the passage of the electrical contact between the mug and the saucer. In short, it recharges the mug’s battery if it runs out of juice. When the mug is set for charging a bright red-light glow and once charged the light turns to green.

Handling of Ether Mug and its saucer

Since Ether Mug is equipped with electrical components, it is recommended to wash it by hands instead of a dishwasher. The saucer should not be submerged underwater and it is preferred to be wiping it while cleaning.

Once the hot beverage is poured to the mug, it will keep it at a temperature of 130° F up to the last sip and the user can also set the liquid to his favorite temperature using Ember App on his mobile phone. The app is available for both Android and iOS platforms. Paring can be done via Bluetooth. As said before, users can set the temperature anywhere between 120°F and 145°F.

The ceramic coating gives a rich feel when the cup is held in hands and the impressions fingerprints are not formed on the surface.

Plush Casino Casino has contributed this content about the gadget which can serve beverages at personalized temperatures. Ether Mug helps to save time and effort of people who have the habit of consuming their beverages at a slow pace, as it helps to eliminate the need for reheating.

Enjoy your first sip to the last drop with Ember Mug!