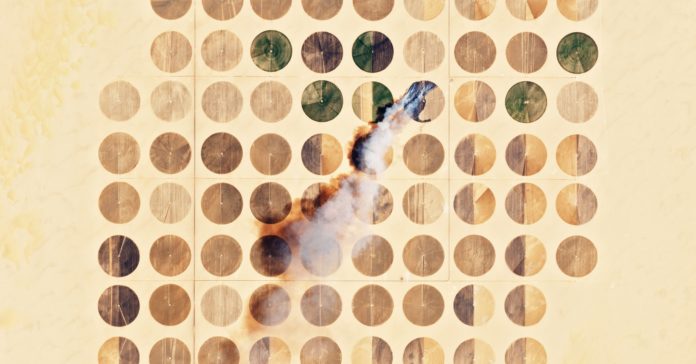 It might not be apparent unless you’re driving through the mid-longitudes of Interstate 70, but around 40 percent of the land in the United States is farmland. Understanding what happens on that acreage is complicated—for individual farmers and agricultural conglomerates. Understanding how to improve what’s going on is even harder.

That’s why Granular—a farm software business under the agriculture division of DowDuPont—penned a deal with Planet. Planet is an aptly named company, with some 200 satellites around Earth, watching it and its goings-on all the time. As part of this multimillion-dollar, three-year gig announced Tuesday, Granular will get access to daily images of the globe, and some of Planet’s six-year archive of snapshots. Granular can feed the pictures into its agricultural analytics tools, which can, in turn, relay wisdom to farmers.

These days, hoeing productive rows is different from how it used to be. Seasons are shifting. It’s dry out there. Partly because of that, Granular’s industry is set to grow by around 17 percent, to $4.22 billion, by 2025. With Granular, farmers can craft crop and field plans, delegate duties to employees, track inventory, and predict revenue and yield. And through the new deal with Planet, Granular will daily slurp images into its software, gathering perhaps more data than has ever been available about crops.

“When I think about this deal, I think a lot about the writing of Wendell Berry,” says Chris Seifert, Granular’s vice president of data science. Berry, a writer and environmentalist, liked to talk about a thing called the “eyes-to-acres ratio”: how many stewards a given square-yard area has. He meant human eyes, of course. But when Seifert talks about “eyes,” he means satellites. “This deal means that we’re going to have eyes on every acre on every cloud-free day,” says Seifert.

Granular can recognize big-scale patterns in agricultural images. Its employees have assaulted corn with jet engines to find out how it blows down. They know what a patch of field looks like when its attendant irrigation nozzle is clogged. They are learning about what the brown and droop of pestilence and pests look like. And through an R&D run with Planet last year, they refined their vision of what those problems look like from far above. As Planet provides more imagery, the software can enhance and expand its conclusions. A farmer can also say, “Field 45 looks fine. Your software is wrong,” and the goal is for the software to use the criticism to become smarter.

Farmers have been interested in incorporating new data into their diet. Granular’s products help manage 2 million acres of farmland in 36 states and four Canadian provinces. “A lot of people assume that farmers are tech-averse,” says Sid Gorham, Granular’s co-founder and CEO. “I would say they are tech-impatient. They don’t have much patience for piddly things that don’t have value.”

Gorham, of course, thinks Granular’s insights are not piddly. “You can pull over to the side of the road in your pickup and get the answer you’re looking for,” he says, on your smartphone. Not piddly, agrees DuPont, the biotech-agriculture-materials science conglomerate that acquired Granular in August 2017—just a month before it merged with Dow.

Some farmers, sensibly, have been unsure about giving too much about their crops away to Big Ag. “I have huge concern when it comes to privacy and sensors on the ground,” says Terry Griffin, a professor of agricultural economics at Kansas State. The agri-data market could, say, use that information to market products to farmers or sell seeds at differential rates.

To that end, the American Farm Bureau Federation created Privacy and Security Principles for Farm Data, a kind of best-practice, do-little-harm set of promises, which Granular, Dow, and DuPont all signed onto before they joined forces. Granular has public stipulations on how farmers’ unaggregated, personal data is used: Yes to letting it ensmarten the software. No to selling it to third parties. No to selling even aggregated financial data to third parties. No to letting DowDuPont use it to determine seed prices. Yes to using it “to inform you of potential products or services of interest”—but you can opt out.

Greenbelts and agricultural fields hug the shores of the Itaipu Reservoir—a natural border between Brazil and Paraguay. The area’s warm, tropical climate makes it an ideal place to grow sugar cane, coffee, tea, and cotton.
Planet

Satellite imagery, though, works differently from data that comes from farmers, like irrigation schedules or soil stats—because satellite imagery comes, of course, from satellites. The orbital images of a field, and the interpretations, technically don’t ask anything of its farmer. Planet’s images are out there, whether Granular buys them or not. “This is something that exists and is taken every day,” says Seifert. Farmers, he says, are used to the idea. “Earth has a monitoring system looking at how things are changing,” he continues, “and part of ‘things’ is their fields.”

When it comes to from-above observation of outdoor crops, says Griffin, “there is no reasonable expectation of privacy”—which farmers likely understand. Imagery from planes and satellites like Landsat has existed for decades. “We can drive down dirt roads in the country and see what’s going on from the side of the road,” he continues. “With satellite imagery, it’s kind of the same.”

Perhaps the bigger issue, for the digital-farming industry in general, is whether the users benefit as much as the ag-data companies. “When it comes to digital agriculture, the benefits to the farmer at the farm level are going to be very minor,” says Griffin. “The majority of that value would go to the groups that control the flow of data and the analytical service providers.”

Griffin thinks some of the digital-farming companies are mostly smoke and mirrors, in terms of that benefit. “I do think Granular is more legitimate than many of the other companies out there,” he says.

And perhaps, with the addition of more Planet imagery, that’ll be even more true. Visual imagery, even the kind from space, has been around for a long time, and farmers didn’t really buy it. But the quality, frequency, and ability to analyze that volume of images—and to use the wisdom from that aggregate to inform individuals—weren’t where they are today. “The science is catching up to the point where we hope it becomes useful for farmers at the farm level,” says Griffin. In granular detail.

GizmoCrazed - October 20, 2018 0
In 2013, a young computational biologist named Yaniv Erlich shocked the research world by showing it was possible to unmask the identities of people...

Stick to your New Year's Resolutions with these classes, products, and...