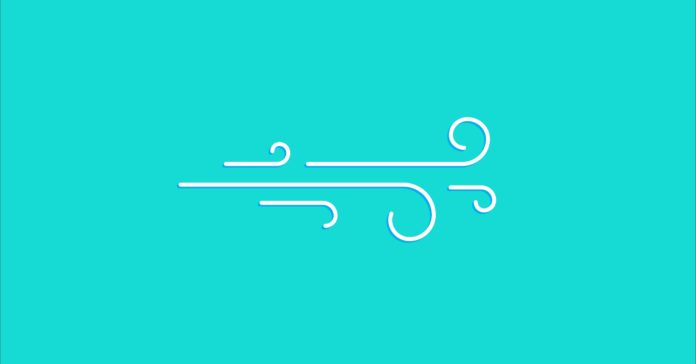 So, in an effort to make Bernoulli feel better I’m going to go over Bernoulli’s principle and include some demonstrations you can do yourself.

Let me start off with a super short description (and a very common one).

As the speed of a fluid increases, its pressure decreases.

Yes, that seems simple. But it’s also complicated. I will explain why this happens—but first I should define pressure. Here is an equation definition.

However, this definition isn’t very useful in this case. Suppose I replace the “fluid” with a bunch of tiny balls. Yes—I like the tiny ball model for fluids (and this works for gases too). In this tiny-ball model, the molecules are like the tiny balls. They are moving around in all different directions with some range of speed values. Sometimes these balls can collide with a wall or surface. The collision causes a ball to change its momentum (where momentum is the product of mass and velocity). This change in momentum requires a force and this force is exerted on the ball by the surface. Since forces are an interaction between two objects, the surface pushing on the air ball means the air ball pushes back with the same force on the wall. So, in a sense the pressure due to a gas or fluid is due to the collisions of these tiny air balls (or water balls).

Also in order to understand the Bernoulli principle, you need to imagine these balls moving at different speeds and in different directions. Here is a picture to help with this (it’s just a picture—it’s not real air balls).

The key point is that the pressure on that bottom surface depends on both the speed and mass of the balls as well as the frequency with which they collide. More collisions means greater pressure. Now suppose this air is moving to the right with some average speed. That means that the average velocity of the balls is to the right, but they are still moving in all directions—just more to the right than to the left. Here are those same air balls as before, but with an average speed to the right (the yellow arrow shows the overall speed).

But what does this have to do with pressure? The more these air balls are moving to the right, the less they are colliding with that bottom surface. With fewer collisions, the pressure decreases. Boom. That’s how Bernoulli’s principle works. It’s much easier to comprehend if you think of fluids and gases as a collection of moving balls—which is essentially true.

Now for the fun part. Here are some demonstrations of the Bernoulli principle that you can try yourself. This first one is the easiest. All you need is a sheet of paper. Hold one edge of the paper just below your mouth and blow. It should look something like this.

Here is another demo that does something very similar. It’s a balloon—you know, for kids. After you blow it up and let the air out, it might do something like this (in slow motion).

It’s the same thing as the paper except that the faster air is on the inside of that little rubber tube. This faster air reduces the pressure in the tube so much that the outside pressure causes the tube to collapse. Of course a collapsed tube also stops the air, which increases the pressure to open it back up. The paper and the balloon are essentially how wind instruments—like the clarinet, saxophone, and oboe—work, while the balloon mouth is like a brass instrument (tuba, trumpet, trombone).

Another fun application is the atomizer. No, it doesn’t break something into it’s atoms—that would be bad. This is just a way to spray a liquid. You can build your own with a drinking straw. Take some scissors and cut partway through the straw. Now bend the straw at that cut so that there is an opening. Next, put one end in a liquid (I suggest water) and blow through the other end (blow hard). Here’s what it looks like.

OK, I agree—it’s not a very good atomizer, but you can’t get any simpler than a straw and some water.

One last demo. Here I have two ping pong balls hanging vertically (I used tape instead of string because it was easier). There is a small gap between the balls. Now watch what happens if I blow air between the balls.

Maybe that demo is difficult to see (my big head kept getting in the way)—but it should be mostly clear that the two balls get pushed together. Really, you could do this with any two objects. You might want to redo it with two empty soda cans. But still the idea is that faster moving air in between the cans decreases the pressure so that the outside pressure is greater and pushes them together. Cheers, Bernoulli!

The WIRED Guide to Aliens

Rainbow At Night, Powerful Lasers Brighten Up The Sky [PHOTOS]