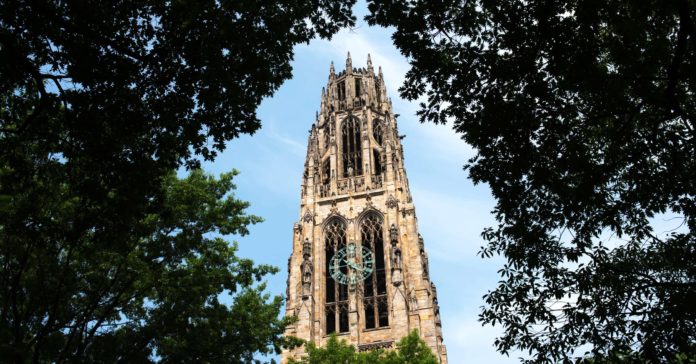 We can all agree that taxes are no fun. But taxes are also what fund public education so our kids can read good, and what keep firefighters employed so our houses don’t burn down. And it’s looking more and more likely that taxes could help our planet from burning down too, with something called a carbon tax. The simple premise: Pump out carbon dioxide, pay a fee.

“There’s a long, long line of research that shows that carbon pricing is often between 5 to 10 times more efficient than the policies that we already do,” says MIT economist Christopher Knittel. Things like fuel economy standards for cars, or renewable energy requirements for electricity companies.

So, great, let’s do it! Except, even at the state level—and the blue state level, at that—a carbon tax is a tough sell. Earlier this month a bill to institute the nation’s first carbon tax floundered in the Washington state senate, which is controlled by Democrats. But, a glimmer of hope: Universities are starting to show the politicians how it’s done. It turns out that colleges provide a fantastic model for how to start thinking about a carbon tax on a state or even national level.

Consider Yale. In July of last year it deployed a clever charging scheme for its buildings, based on facilities’ energy use relative to the campus as whole. “If in any period an individual building does better compared to its historical period than Yale does compared to its historical period, then that building gets money back,” says Casey Pickett, director of Yale’s carbon charge project. “If it does worse than Yale did, then it ends up paying money.”

By pitting individual buildings against their own historical energy usage, the system helps control for the different sizes and ages of the facilities—a 50-year-old building can’t compete against a brand new one, after all. It also adjusts for weather, since you don’t want to be comparing your heat-blasting January usage against a less energetically costly April. All the while, the buildings are compared to the school as a whole.

One way not to do it would be what Yale toyed with in a pilot study: Targeted reductions, in this case just by 1 percent. “If you hit that, you get money back, and if you don’t you have to pay us,” Pickett says. “But in that case, if there’s a cold winter everyone would do poorly and everyone would have a hard time hitting their target.”

So Yale has worked itself out a carbon charge system. That’s not to say its program would work everywhere. Take Swarthmore College, which counts just 1,600 students. “You could almost view our entire college like one department of Yale,” says Aurora Winslade, the school’s director of sustainability.

Unlike Yale, Swarthmore’s departments don’t take up whole buildings. So instead, Swarthmore’s carbon charge comes in the form of a fee: about 1.25 percent of each department’s operating budget, excluding salaries. Departments are also invited to voluntarily reduce some part of their budget to bump that carbon fee even higher.

But really, it’s not just about the money. “It’s education, and it’s engaging the community both on campus and off campus in a dialog about why we need to price carbon and how that will contribute to keeping fossil fuels in the ground,” Winslade says.

Which is one of the reasons why colleges are uniquely positioned to lead the fight for carbon taxes around the world. “The key advantage of a university doing this is it becomes a vehicle for learning and research,” says Knittel, the MIT economist. Impose a carbon tax at the state level and you’re liable to rile up anti-tax folks. Do it at the university level and you’re liable to get academics thinking about ways a carbon tax does and doesn’t work—and how it might be improved.

Universities are also a fantastic physical stand-in for whole cities. They’ve got lots of different kinds of buildings of varying ages and energy requirements. Many, like Yale, even provide their own power. “If you look at it as a city, then it also becomes transferrable to communities, urban environments and industries,” says Julie Newman, director of MIT’s Office of Sustainability.

But how would a carbon tax play out on a state or federal scale? Who’d get the money that, say, power plants would have to pay, or that would come attached to gasoline? One option would be to use it to subsidize green technologies like solar panels or electric cars—though there are issues with that approach. “What you’re doing is you’re taxing energy, which low-income consumers spend a higher percentage of their revenue on, and then you’re giving that money to on average high-income consumers because that’s who’s putting panels on their roof and buying Teslas,” Knittel says.

Another tack would be to use the revenue from a carbon tax—considered a “good” tax—to lower “bad” income or sales taxes. Indeed, this is the route that Washington considered with a 2016 ballot initiative, though the bill that floundered this month would not have cut other taxes.1

Whatever the method, it’s hard to argue that some version of a carbon tax would be worse than doing nothing at all. “Economists have known for over 100 years that that’s the actual efficient way to fix pollution—to put a price on the pollution that is equal to the damages,” says Knittel.

So as politicians bicker over why or how or when to do a carbon tax, look to the universities to help lead the way. The kids, it seems, are indeed alright.

1Update 3/12/18, 7:45 pm ET: This story has been updated to reflect the fact that a previous carbon tax ballot initiative in Washington was designed to lower other taxes, but the recent bill would not have cut other taxes.