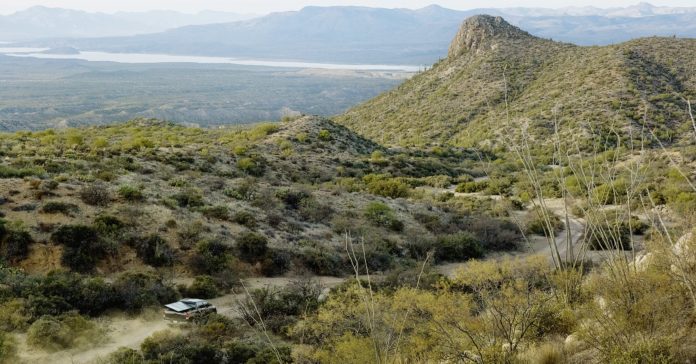 The world is full of water, flushing down our toilets and flowing from our taps. And yet where I live, in the American Southwest, and quite possibly where you live, the kind of water people need to survive is getting harder to come by. Across the region, temperatures are rising and droughts are getting more severe, and in the coming decades the West will struggle to supply the water its residents and businesses demand. Even in wetter regions like the Gulf Coast, where the storms are getting stronger and the rainfall more persistent, much of that water glut is washing back out to sea, unused, leaving a path of destruction in its wake.

So I worry about the stuff: where it’ll come from, who will own it, when it will dry up. To steady my mind, I’ve turned to technology. More exactly, the emerging innovations that will keep us hydrated in the not-so-distant desertified future. There’s a company called NBD Nanotechnologies, based in Boston, which makes coatings that can be added to plastic and metal surfaces, allowing them to pull water out of thin air. (NBD stands for Namib Beetle Design, referring to an insect that captures moisture on its body from surrounding fog.)

Then I found a company called Zero Mass Water, based in Scottsdale, Arizona, that produces $2,000 “hydropanels” that the company claims can capture water vapor from air. One panel can make up to five liters a day, and two of them together could produce enough for a household’s daily drinking and cooking. In theory, someone—even me—could strap one of these panels to the bed of a truck, drive out to the desert, and live off the grid with water to spare.

The company’s founder and CEO had his doubts. Cody Friesen is a professor of materials science at Arizona State University with a booming, radio-ready voice, and he told me a few times over the phone that, while he appreciated my outside-the-box thinking, his hydropanels weren’t intended for vehicular use. They weigh 275 pounds and are intended for yards and rooftops, not truck beds. The “vibrational activity” involved with desert off-roading concerned him. But I pressed him, and after conferring with his engineering team he eventually said that it could be done or, at least this one time, tried. Once the truck-bound panel was ready, Friesen invited me out. “Will it work?” I asked him when I arrived in Scottsdale.

I drove northeast into the high desert in a black Toyota Tundra, past the jagged Superstition Mountains, and worked my way up the escarpment of the Mogollon Rim that borders the Sonoran Desert. Five hours after leaving the city, I pulled over and watched the sky go orange, then pink, then purple, and I felt my throat tighten as my mouth started to dry. Walking toward the strange rig at the truck’s rear, a 5-inch-thick black panel roughly the size and shape of the cab and tilted upward at a 35-degree angle, I found myself asking a question that was both very, very old and (for my purposes, anyway) entirely new: Would I have the water I needed to survive?

I’d put my trust in these panels. Hydrophilic membranes trap water vapor from air that’s blown across them by a solar-powered fan. The vapor-turned-water then drops and pools and flows through a series of mineral cartridges to make it more drinkable. Because both the landscape and the water vapor in the air are changing all the time, the panels connect to HQ back in Scottsdale via a mesh network, and Zero Mass Water staffers upload predictive algorithms that adjust fan speeds and maximize energy efficiency.

As the sky darkened, a chill ran through my body, mostly because it was suddenly quite cold, but also because seeds of doubt were germinating. The fans at the panel’s sides were making a faint whinging sound, still blowing as the last of the solar power worked in the gloaming light. As darkness gathered, I used a flashlight to find the small black nozzle where the water was supposed to flow. Turning it, I held my breath. And after some chugging and wheezing from the pump, water spewed out. I danced a small, silent desert dance, in celebration and to warm me up, then caught myself. Water was pouring out! I was wasting it. And how much did I have? I checked the reservoir. It looked like at least a few liters. More than enough to get me through the night.

How the Hydropanel Works

1. The panel contains absorbent material that pulls moisture from the air.

3. The drops collect in a reservoir at the panel’s base.

4. A pump draws water out of the reservoir and into a tap.

This article appears in the March issue. Subscribe now.

GizmoCrazed - June 2, 2016 0
This Fourth of July, NASA’s solar-powered Juno spacecraft will arrive at Jupiter after an almost five-year journey. News briefings, photo opportunities and other media...

Here are the 'low rates' for Apple's new credit card

Review: Huawei’s P20 Pro is a shiny phone with a strong...