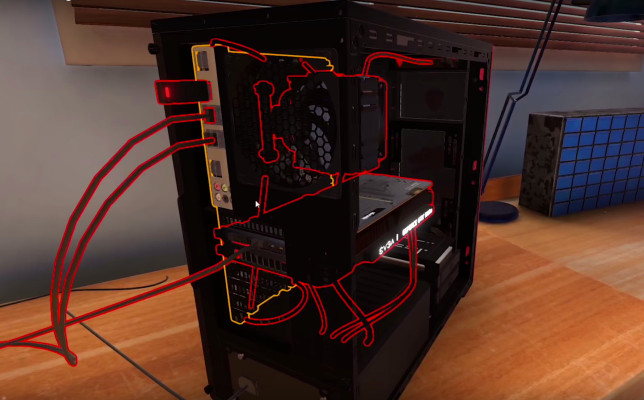 Considering we’ve got simulators for everything from driving a junker (x2) to moving into a neighborhood with a bunch of hot dads in it, I suppose it was only a matter of time until someone made a game where you assemble your own PC. It’s called PC Building Simulator, as you might guess, and it looks fabulous.

I’ve built all my PCs over the years, including my current one, which I really should have waited on, since the early Skylake mobos were apparently trash. I’m sure we can line up the screw holes better than that, MSI!

What was I talking about? Oh yes, the simulator. This is no joke game: it uses real, licensed parts from major manufacturers, which are (or will be) simulated down to their power draws, pins, draw counts and so on. So if you pick a power supply without enough molex connectors to handle your SLI rig and PCIe solid state system drive (or whatever), it won’t start. Or if you try to close the ultra-slim case with an 8-inch-tall heatsink on your overclocked CPU, it’ll just clank. (Some of these features are still in development.)

Add LEDs inside the case, replace the side panel with acrylic (no!), try out a few cooling solutions… the possibilities are endless. Especially since manufacturers like Corsair, AMD and so on seem hot to add perfectly modeled virtual versions of their components to the selection.

There’s even a “game” aspect where you can start your own PC repair business — someone sends you a machine that won’t boot, or shuts down randomly, and you get to figure out why that is. Run a virus scan, reseat the RAM, all that. Damn, this sounds just like my actual life.

Seriously though, this is great — it might help more people get over the idea that building a PC is difficult. I mean, it is, but at least here you can go through the motions so it isn’t a total mystery when you give it a shot.

The best part is that this game is made by a teenager who put together the original as a lark (it’s free on itch.io) and attracted so much attention that it’s been blown up into a full-blown game. Well, an Early Access title, anyway.