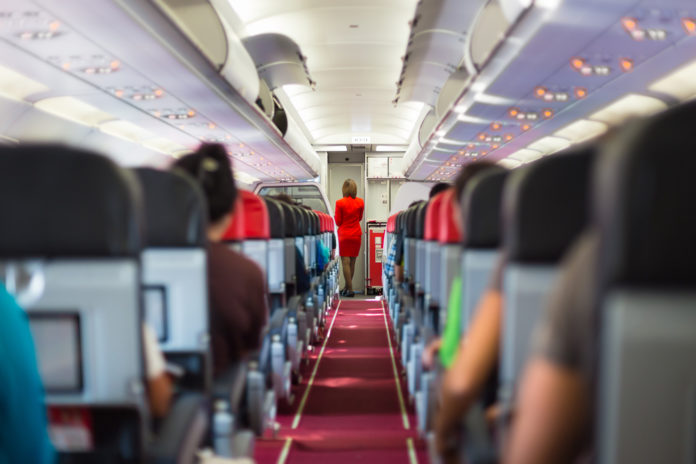 Crying babies, chronic snorers — they’re the usual targets of our displeasure when we fly. But, the real villains of the sky might be germs.

Flyers are packed into a cramped metal tube for hours on end where movement is limited. It seems like a microbe’s playground. But research on the topic is a bit inconclusive, despite worrying cases involving SARS and an aggressive type of influenza. Studies suggest that caution is warranted, but researchers have so far had trouble saying exactly how air travel affects disease transmission. At the moment, public health guidelines state that anyone within two rows of an infected individual could be at risk, although other studies suggest otherwise.

Most recently, a team of researchers from Emory University and the Georgia Institute of Technology—funded by Boeing—conducted their own boots-on-the-plane study of infectious disease transmission aboard commercial aircraft. On 10 flights from Atlanta to the West Coast and back, they took swabbed samples of various surfaces and recorded how often passengers and crew members moved around. Pairing the data with models of air movement and microbe dispersion gave them an idea of just how far a potential pathogen might travel.

Their findings, published Monday in the Proceedings of the National Academy of Sciences, indicate that a sick neighbor is certainly something to worry about when flying. Those within a row of a sick person and within two seats to either side had an 80 percent chance of getting sick in their model, which used a fairly high assumed rate of transmission. The risk of infection drops off sharply after that, though. Those more than a few seats away had little to worry about. That’s even closer than the two row-minimum suggested by public health agencies.

A sick crew member, however, posed a little more danger. They move around the cabin more and have more contact with passengers, so the risk of transmission increases. Just one sick flight attendant infected almost five people on average in the researcher’s model. That’s a big number, but it does make some assumptions, the biggest of which is that sick crew members even come in to work. It’s more likely that they would just stay home.

Back Down to Earth

There are difficulties in modeling disease transmission rates on such a small scale like this, and this particular study wasn’t very big. They looked at just ten flights and the longest was only a bit over five hours. International flights can go for fifteen hours or longer, and involve much more movement on the part of passengers, something that could increase the risk of infection.

Their model also only looked at microbes that could be carried by droplets, which don’t travel very far. Viruses spread by smaller aerosol particles could circulate much longer and farther. This includes diseases like tuberculosis and measles. Air travel also involves extended periods of contact with other passengers at boarding gates, security checkpoints and elsewhere, and this could affect rates of transmission as well.

It’s also worth pointing out that we encounter similarly confined, crowded spaces during the course of our daily lives. Buses, movie theaters, workplaces and more pose the same sort of risks, though the authors don’t provide any measure of comparison here. Airplanes, do, however, travel long distances very quickly, something that can turn a local epidemic into a pandemic within days. That hasn’t happened yet, though scattered cases involving SARS and Ebola, among other diseases, have stoked worry.

Ultimately, a review of the scientific literature on the topic found moderate evidence that airplane cabins helped to spread influenza. This latest study doesn’t really change that, though it does reveal the danger that an infected crew member poses.

So, for flight attendants — and for all of us, really — if you’re sick, just stay home.

Google Maps and Lyft could soon be waaay more accurate thanks...