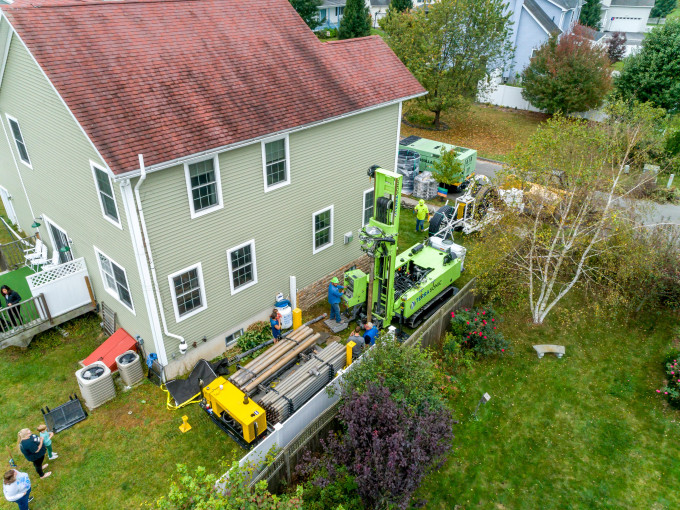 Dandelion, a clean energy startup that was originally incubated inside Google parent Alphabet, has raised $4.5 million in funding to build out its business — a geothermal heating and cooling system for homes that claims it will drastically reduce its customers’ bills — it claims to cut bills in half (notwithstanding the upfront costs, more on that below) — while also being significantly more friendly for the environment compared to conventional systems that use gas and fossil fuels.

The company opened for business first in Upstate New York — a market with extreme cold and hot spells — where it says it has started to install systems in people’s homes, and it’s going to use the funding to help work through what it says is a waitlist of “thousands” of customers nationally.

“We have been overwhelmed with demand and support from homeowners across the country,” said Kathy Hannun, cofounder and CEO of Dandelion, in a statement. “This round will help us ramp up operations to serve these customers and launch our new and improved 2018 offering.”

The funding was led by New Enterprise Associates, with participation also from new investors BoxGroup, Daniel Yates, and Ground Up, and previous investors Borealis Ventures, Collaborative Fund, and ZhenFund, the Chinese-based VC associated with Sequoia in China. It brings the total raised by Dandelion to $6.5 million, including a seed round it announced when first spinning out in July of last year.

The impressive list of backers — and the fact that Dandelion was originally incubated at Alphabet X, the company’s “moonshot” factory — underscores a couple of trends worth pointing out.

The first is the double maxim that everything is now a “tech” challenge, and that the interests of the tech world touch everything. As legacy businesses continue to try to update their systems or become more responsive to some of the challenges of running their legacy operations, a company like Dandelion becomes a direct threat, or a potential, strategic acquisition target.

The second is the ongoing interest among tech investors and tech companies to expand their horizons and explore companies and ideas that might prove to be disruptive in the same way that tech has been, further down the line; or whose solutions could prove to be a helpful boost to their more direct tech interests — for example by becoming acquirers of data systems to run these services better, or by making the cost of electricity to run other services (like internet, or maybe, these days, bitcoin mining) less expensive. (Dandelion is already proving its role in that wider ecosystem: just earlier this month, it acquired Geo-Connections, a geothermal SaaS startup.)

“Over the next decade, homeowners across America will replace their expensive, conventional home heating systems with Dandelion geothermal,” said Yates in a statement. “I’m thrilled to be part of the team that will lead this transition.” Yates — who had founded the energy efficiency startup Opower, which went public and then was acquired by Oracle — is joining the board as an executive director with this round.

In the case of Dandelion, its challenge and opportunity has been in the world of legacy energy services. Built largely on fossil fuel systems and centralised operation models — you have large plants and generators located in one place that distribute their energy to smaller stations, which distribute to individuals — the idea behind Dandelion has been to build a heating and cooling system that is significantly more decentralised: it operates directly from a person’s home — or more specifically, underneath it — leveraging the ground’s natural state of being 50°F, in order to work.

One big issue with scaling up geothermal energy solutions prior to Dandelion has been the up-front installation costs, both from a financial and practical point of view. As Hannun has described it:

The process of installing ground loops in homeowners’ yards has typically been messy and intrusive, using wide drills that are designed to dig water wells at depths of over 1,000 feet. These machines are unnecessarily large and slow for installing a system that needs only a few 4” diameter holes at depths of a few hundred feet. So we decided to try to design a better drill that could reduce the time, mess and hassle of installing these pipes, which could in turn reduce the final cost of a system to homeowners.

The company’s solution has been to build a system that bores a much smaller hole (a few inches is all that’s needed) at a much shallower depth of hundreds of feet — making the installation something that can be done in less than a day.

So far, the company’s upfront costs might prove to be too much of a gating factor for the majority of homeowners. Installations run between $20,000 and $25,000 in upfront costs alone. For those willing to take the plunge — or dig into the challenge, as the case may be — over twenty years, the company has claimed that savings can be about $35,000.

The company also tells me that homeowners are buying a lot of these using financing and will save around 20 percent annually if they finance. (The savings percentage comes after a tax credit, a spokesperson said. “Here is a real example from one of our homeowners. He needed a 4-ton system, which is the size most homes require. He formerly spent $2,621 on fuel oil annually (832 gallons over the year at $3.15/gallon). To run geothermal, he requires $803 in additional electricity costs. With Dandelion pricing, starting at $115/mo, geothermal heating costs for his home are $1,380 + $803 = $2,183. This is about 20% savings annually for heating alone. His air conditioning will also be over twice as efficient with geothermal than it was with conventional a/c.”)

The savings in terms of using clean versus dirty energy, of course, come from the start.