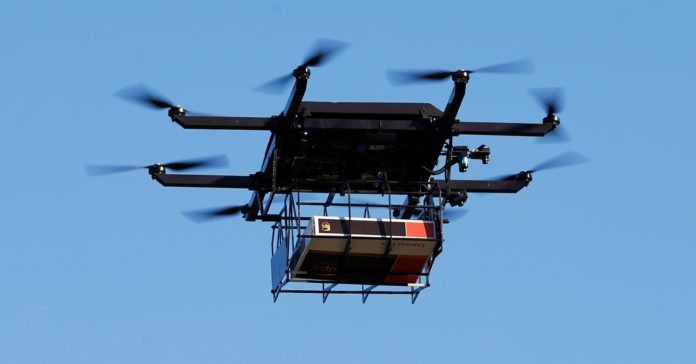 If the idea of swarms of delivery drones dropping packages all over our cities started out as a joke, for some reason the punchline hasn’t landed yet. Amazon applied for a patent in 2015 for a command center, like a beehive, plopped into your city, which isn’t a worrying metaphor at all. Google has its own program in the works, which at least for the moment involves delivering burritos. Again, if this is a joke, it’s got a very long fuse.

Forget about the insane logistics of such a system for a moment, or if you’d even be keen on drones swarming your town. The big question is: Would this actually be a better, more efficient way to go about things than traditional delivery trucks? Without a real system in place, that’s tough to answer.

But today in Nature Communications, a group of researchers have taken a shot at modeling the energy efficiency of delivery drones, and compared it to classical fleets of delivery trucks. Which comes out on top? It depends, basically—on a slew of factors that you probably haven’t begun to think about. But they’re the same ones companies and regulators will have to chew on as automated delivery becomes more plausible.

First off, different regions of the country employ different levels of renewable energy like solar, which means charging all those drones would release different amounts of carbon dioxide depending on where you live. So for this study, the researchers compared emissions impacts at both ends of the spectrum: in a very green state, California, and a very not green one, Missouri.

“What we found were mixed results,” says lead author Josh Stolaroff, an environmental scientist at Lawrence Livermore National Laboratory. “There is a possibility drones can reduce greenhouse gas emissions and reduce energy use, but you have to be careful how you deploy them.”

But location isn’t the only thing that can influence emissions—you have to factor in size, too. The researchers modeled two different drones, that small quadcopter that could carry a 1-pound package and a larger octocopter that could manage 17.5 pounds. (They tested them in the real world at different speeds and wind conditions, then plugged that data into their models.)

The model, though, has to make some assumptions that might not line up with how the real-world implementation of delivery drones shakes out. For one, drones in the simulation run routes as the crow flies. “In the real world, depending on how they’re regulated, there might be designated routes that drones have to follow,” says Stolaroff. “Then that’s going to make the paths long, it’s going to mean you’ll need the drones to go farther, or you need more warehouses to service the same area.”

That’s a relevant difference, because given current battery technology, one drone carrying one package to one destination can fly just a little over two miles. These researchers assumed that warehouses—where drones could load up and charge—would be built to accommodate that limited range. The relatively small city of San Francisco would need four, while the greater Bay Area would need over 100.

But the more warehouses you put in to accommodate the drones, the more energy you’re using to power and heat and cool them, offsetting the energetic benefits of air delivery. (The researchers didn’t factor in the energy differences as far as semi trucks getting goods to say, four warehouses versus one in the first place.) One way around that problem might be repurposing existing facilities into drone homes. So for Amazon, which now owns Whole Foods, drones could, say, deliver groceries from the roof of stores already dotted throughout cities like San Francisco.

And that’s to say nothing about how different networks of drones would stay out of one another’s way. Amazon may have its own fleet, and Google another, and a grocery chain still another. You can get the many drones within your own swarm to get along, easy enough, but good luck occupying the same skies as someone else’s squadron without a confrontation.

While delivery drones, like any other kind of automation, could be great for the bottom line of these companies, there’s a right way and a wrong way to go about this. “It’s pretty clear that companies are interested in doing this,” says Samaras. “What’s important is understanding the ways that policy makers could guide the beneficial outcomes now before there are a bunch of drones in the sky delivering packages.”

Stand (or Fly, or Roll) and Deliver

— While some companies consider airborne deliveries, others want to stay grounded with delivery robots. In San Francisco, for instance, a startup called Marble has been wheeling around one of the city’s most chaotic neighborhoods.

— Well, at least it was for a while. Citing safety concerns, the San Francisco Board of Supervisors recently voted to severly restrict delivery machines on city sidewalks.

— Meanwhile, in Rwanda, one startup is undertaking a rather more noble affair: delivering blood supplies via drones.

GizmoCrazed - April 17, 2016 0
Jeremy Conrad, a founding partner of Lemnos Labs, apparently means what he tweets, having invested in Marble, a new, San Francisco-based ground-delivery robot that will...

Scientists Got Adult Frogs to Regrow Limbs. It's a Step Toward...