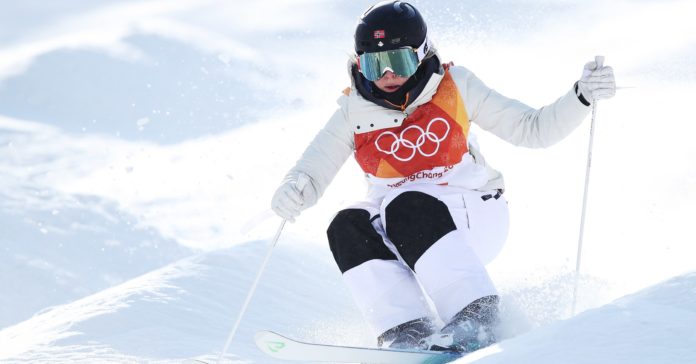 At the 2014 Sochi Winter Olympics, the 4 x 10 kilometer relay was supposed to be a battle of cross-country ski titans Norway and Sweden. Felix Breitschädel watched from the sidelines as the race unfolded under a warm Russian sun. But when the first skiers emerged from the woods onto the arena packed with spectators, Norway’s first skier was nowhere to be seen. He dropped to ninth place, while the rest of the team rallied to finish fourth. For medal-hungry Norwegian ski racing fans back home, “it was a disaster,” remembers Breitschädel, equipment and technical director for the Norwegian Olympic Committee. “We were called traitors in the Norwegian media.”

Technicians like Brietschädel had applied the wrong combination of chemical waxes to the base of the athlete’s ski. These hydrocarbon and fluorocarbon compounds—which take the form of waxes, fluids, and powders—must accomplish two contradictory tasks for skiers to win gold: grip the snow on the uphill while also gliding on the downhill.

The compounds adhere to the base of the ski, which is made of ultra high density polyurethane, but dissipate over time. For a two-minute downhill ski race, competitors want the slipperiest surface possible. For two hour-long cross-country marathon, it takes six or more layers of wax to keep the racer moving up and down over the course.

At Sochi, Brietschädel and other Norweigan ski technicians tested dozens of combinations of skis and waxes alongside the athletes in the hours leading up to the race. But just before the event began, race organizers decided to spread a layer of salt on the course. Salting a course is a common way to preserve a course by reducing the snow’s surface temperature by up to 4 degrees Celsius (7 degrees Fahrenheit). That happens because of an endothermic reaction that pulls heat from the snow to the salt. Nitrogen-based fertilizers like ammonium nitrate or ammonium sulfate are also used to harden snow on race courses.

“We tested in one condition and the organizers decided to put out salt on the ski track,” Brietschädel said. “The whole package didn’t work as well as we hoped for.”

A good wax job won’t win an Olympic race, but it will keep things close, according to experts.

Similar waxing problems also plagued Kikkan Randall, a US cross-country skier who competed at Sochi and will be attending her fifth Olympics at Pyeongchang, South Korea.

In Sochi, Randall failed to qualify for the women’s sprint event by five one-hundredths of a second. She believes her skis didn’t glide enough to escape the other racers on the final descent to the finish line. “I made a break and they all came back on a downhill,” Randall says about her qualifying heat in Sochi. “Even one of my teammates came sailing by.” Maybe she also lacked a final sprint, Randall admits. But good wax would have given her an edge in the two and a half-minute race.

In South Korea, it will be Andrew Morehouse’s job to make sure Randall and the other Americans don’t have a repeat of the problematic wax conditions in Sochi. “We don’t want a fit athlete that can’t compete because the skis are bad,” Morehouse said from a pre-Olympic training camp in Austria. “We have won some races when our wax is better.”

Ski waxing is a combination of art and science. Morehouse will be lugging not only his laptop and several suitcases of wax to South Korea’s Olympic skiing venue, but also devices to measure the moisture content and temperature of the snow and air, as well as climate conditions and windspeed. The technicians also need to know the position of the sun on each section of the race course, which often runs through shady forests and sunny open areas.

For longer races, Morehouse begins with a standard paraffin base wax that is melted and then brushed into the pores of the ski base. Then comes layers of fluorocarbon powder and liquid waxes that often contain nasty solvent-based additives such as benzene, toluene, and xylene. To protect himself, Morehouse wears a respirator, and the US Ski Team recently purchased semi-truck with ventilation hoods to create a safer work area. This move came after scientists in Sweden and Norway found wax technicians who prepare hundreds of skis at championship events were tested with high levels of harmful fluorinated compounds in their blood. (The European Union also considered banning certain types of ski waxes because of the fluorine compounds produce a climate-warming greenhouse gas, though that move has been postponed for now.)

The composition of those mixes are carefully guarded secrets; big European ski teams carefully guard their wax selection and use code names on two-way race radios. The various chemicals in the wax combine to perform at different temperatures, Morehouse explains: “In cold conditions, you want waxes that are hard and durable so the snow crystals can’t dig into the ski base as much,” he says. “As you get warmer, you want waxes that repel water and shed dirt. The more fluorocarbons, the more hydrophobic they are. In wet conditions, you want waxes that have a lot of fluorocarbons in them.” Longer races are harder because the wax has to last, and because weather conditions can change during the event.

During classical style cross-country ski races, a sticky layer of kick wax is applied under the mid-section so that the skier can grip the snow when climbing hills. Smoother glide wax goes on the tips and tails. The stiffness and camber of each individual ski also determines how they will grab and glide on the snow surface.

On race day, Morehouse melts, scrapes, and polishes a layer of wax before applying the next layer. Then he will join the coach and skier on the racetrack and see which ones work best. The wax layers form a protective coating, while channeling water down and away from the ski in tiny grooves along the structure of the ski base. “Our job is all about reducing friction,” Morehouse says.

At the Pyeongchang Olympics, Morehouse will keep track of all this data in his notebook (the Norwegians use a mobile-based wax app) so that he can get a rough idea of where to start—and then, it’ll be up to the racers.

More on the Olympics

By 2080, Tropical Diseases Could Be Headed to Alaska

GizmoCrazed - April 2, 2019 0
This story was originally published by Grist and is reproduced here as part of the Climate Desk collaboration. Nearly a billion people could be newly...

Top 10 Things You Never Knew You Could Do With Chrome