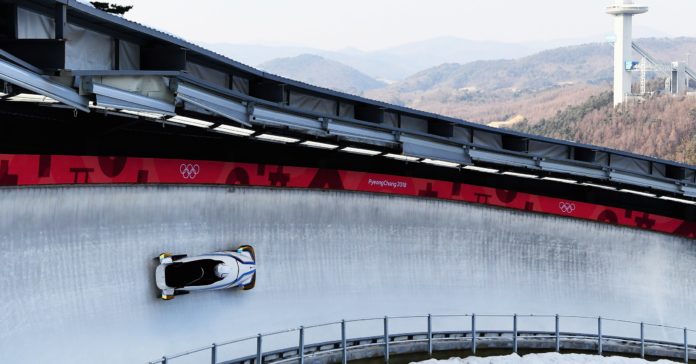 I don’t know very much about bobsleds—but I know quite a bit about physics. Here is my very brief summary of the bobsled event in the winter Olympics. Some humans get in a sled. The sled goes down an incline that is covered in ice. The humans need to do two things: push really fast to get the thing going and turn to travel through the course. But from a physics perspective, it’s a block sliding down an incline. Just like in your introductory physics course.

So here is a block on a low friction inclined plane—see, that’s just like a bobsled.

You can see that there essentially just three forces acting on this box (bobsled). Let’s take a quick look at each of these forces.

Now we are ready for the important part—the relationship between force and acceleration. The magnitude of the total force on the object in one particular direction is equal to the product of the object’s mass and acceleration. For the x-direction, this would look like this:

The key here is that the acceleration of the object depends on both the total force and the mass of the object. If you keep the force constant but increase the mass, the object would have a smaller acceleration. Now let’s put this all together. I will set the x-axis along the same direction as the plane. This means there are two forces that will influence the acceleration down the inclined plane: part of the gravitational force and the frictional force. The gravitational force obviously increases with mass—but so does the frictional force since it depends on the normal force. What we have are two forces that increase with mass. So the mass of the block doesn’t matter for the acceleration down the incline. It only depends on the inclination angle and the coefficient of friction. In a race, a big block and a small block would end in a tie (assuming they started with the same speed).

Let me show the impact this has on a bobsled with the following example. Suppose I have two blocks sliding down identical inclines and traveling at the same speed. Everything is identical except for the mass. Box A has a small mass and box B has a large mass.

Although they have the same air force and same speed, the heavier box (box B) will have the greater acceleration. This same air resistance force will have a smaller impact on its acceleration because it has a larger mass. So mass does indeed matter in this case. Actually, the air drag matters quite a bit. That’s why bobsled teams are also very concerned about the aerodynamics of their vehicle. When competing in the Olympics, every little bit matters.

More on the Olympics