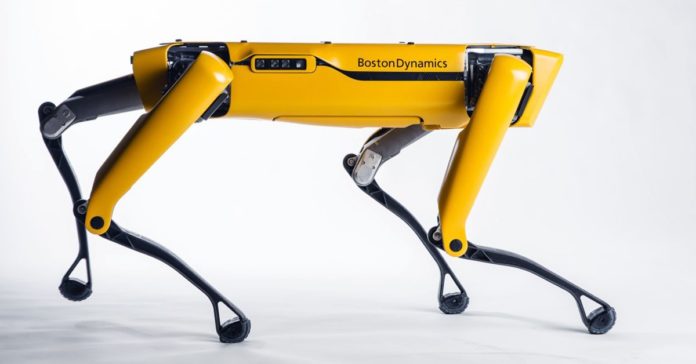 You could argue that the door handle has had a disproportionate influence on modern robotics. It was the humanoids of the Darpa Robotics Challenge, after all, that were tasked with opening doors, and it was those machines that helped drive robots to where they are now.

Today Boston Dynamics posted a video of its SpotMini quadruped robot extending an arm out of its head to turn a handle. With the dexterity of a tray-carrying butler, it uses its foot to prop the door ajar, then elbows it all the way open for its (armless) SpotMini friend to walk through. At face value, it’s a pretty incredible feat. But it’s also an interesting twist in the quest to make robots that get along with a world built by and for humans. Maybe the Darpa Robotics Challenge had it wrong with humanoids after all, and the best robots for rescue operations will look nothing like humans—or any other animal, for that matter.

At the moment, humanoids are great at two things: Looking like humans and falling on their faces, as the Robotics Challenge showed so well. (Though one particular humanoid, Cassie, does much better in part because it doesn’t yet have an upper body to worry about yet.) Walking on two legs is a monumental challenge; that’s why Chimp, a vaguely humanoid machine that rolled on treads instead of lumbering on two legs, did so well.

And also why SpotMini has such promise. Humanoids should be inherently well-equipped to explore environments built for humans, what with all the stairs and such. But SpotMini has a leg up (sorry) here because four limbs are inherently more stable than two. Not to mention that it’s more energy efficient if you don’t have to constantly balance your machine to not fall on its face.

Plus, well, this bot technically has five limbs. This newest version of SpotMini marries the stability of a quadruped with the dexterity of a human. It’s a hybrid creature that shows the awesome power of robotics: Human engineers are inventing an incredible array of new species because they’re not bound by the rules of nature, just physics. Want to put an extra arm on a four-legged robot? Go ahead. And why not make Chimp roll instead of step, if that makes it more stable?

SpotMini is but one species in a robotic kingdom that is exploding with diversity. And it’s thanks in large part to door handles. Finally, a technology whose time has come.