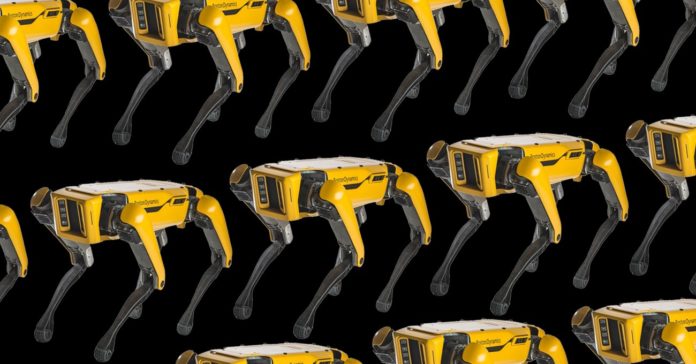 Hey, remember that dog-like robot, SpotMini, that Boston Dynamics showed off last week, the one that opened a door for its robot friend? Well, the company just dropped a new video starring the canine contraption. In this week’s episode, a human with a hockey stick does everything in his power to stop the robot from opening the door, including tugging on the machine, which struggles in an … unsettling manner. But the ambush doesn’t work. The dogbot wins and gets through the door anyway.

The most subtle detail here is also the most impressive: The robot is doing almost all of this autonomously, at least according to the video’s description. Boston Dynamics is a notoriously tight-lipped company, so just the few sentences it provided with this clip is a relative gold mine. That information describes how a human handler drove the bot up to the door, then commanded it to proceed. The rest you can see for yourself. As SpotMini grips the handle and the human tries to shut the door, it braces itself and tugs harder—all on its own. As the human grabs a tether on its back and pulls it back violently, the robot stammers and wobbles and breaks free—still, of its own algorithmic volition.

The robot is able to correct for extreme forces, all the while handling a relatively precise task. Boston Dynamics is, as it says in the title of the video, “testing robustness.” That is, a robot’s ability to deal with our crap. It’s hard as hell to get a robot to not fall on its face, much less fight off a human and go about its business as if nothing happened.

Now, we can’t be sure just how autonomous SpotMini is. A human could still be controlling it with a joystick from afar. But could a robot really do this all on its own? “I think it probably is, because actually teleoperating a robot to behave that way is pretty challenging,” says Noah Ready-Campbell, founder and CEO of Built Robotics. “It’s extremely impressive, no doubt.”

If you’re looking for reassurance, though, consider that SpotMini’s autonomous capabilities are probably pretty limited. Humans are still good at human things like planning (driving the robot to the door), while machines are getting ever better at repetitive tasks (like opening doors). There are actually already plenty of robots working in concert with humans in the wild: Security robots, for instance, work as eyes and ears for human guards, and robots deliver food in hotels and hospitals. But in both those cases, a human is in the loop. Robots just aren’t ready to wander on their own, leading to the proliferation of call centers where robots in distress can get help from human teleoperators.

So beyond opening doors and stabilizing itself, just how capable is SpotMini on its own? Could the robot do something like wander out of the building and find a particular room in another building? “I doubt that,” Ready-Campbell says. “The sheer variety of obstacles it would encounter like going up stairs, different shaped doors, all those kinds of things, it would probably break down.”

When it comes to needling by hockey stick, though, Boston Dynamics seems to have things covered. In 2016 the company released a video in which a human used one to push around Atlas, the company’s famous humanoid robot. This did not suit everyone. Some called the human offender a jerk, and praised the poor robot as hard-working. So this time, Boston Dynamics made its intentions clear in its video’s description: “(Note: This testing does not irritate or harm the robot.)”

How SpotMini might be used is unclear, but it’s worth noting that Boston Dynamics developed the robot’s older brother, BigDog, as a pack mule for the military. (Though the Marines rejected it because it was too noisy.) It’s also worth noting that it’s rare for the company to drop videos like this so close together, much less give so much information in the video’s description. Might it finally be getting ready to release a machine into the market?

Time will tell. But before you freak out about robots breaking into your house, please keep in mind that robots are here to help humanity, no matter how much we attack them with hockey sticks. Maybe open doors for them, just to be safe.

Omnifocal Glasses Automatically Focus On Whatever You’re Looking At

GizmoCrazed - March 15, 2016 0
Inevitably you end up tilting your head back to peer through the bottom of a pair of multifocal glasses just to read something. An Israeli...

Graphene Could Make Your Next Smartwatch Imprinted Directly In Your Skin