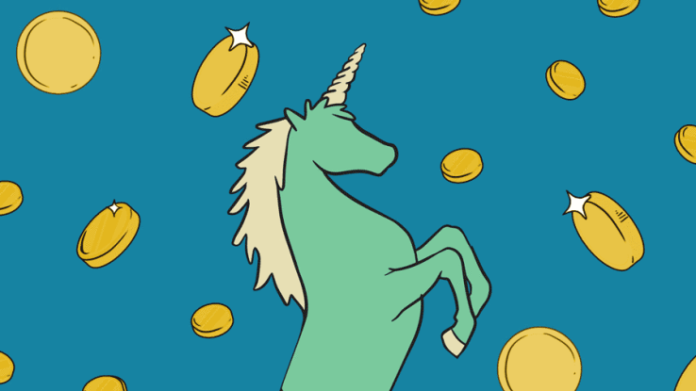 Gené Teare is the head of content at Crunchbase.

Is there a point when investors will turn off the spigots for giant unicorn funding rounds? If so, we haven’t reached that threshold yet.

Last year, investors put a record amount of capital into members of the Crunchbase Unicorn Leaderboard, a list of private venture-backed companies valued at more than $1 billion.

Globally, a staggering $66 billion went into unicorn companies in 2017, up 39 percent year-over-year, according to an analysis of Crunchbase data. The ride-hailing space was the single largest recipient of investor dollars, with several rivals in the space raising billions. Investors also poured copious sums into co-working, consumer internet and augmented reality. 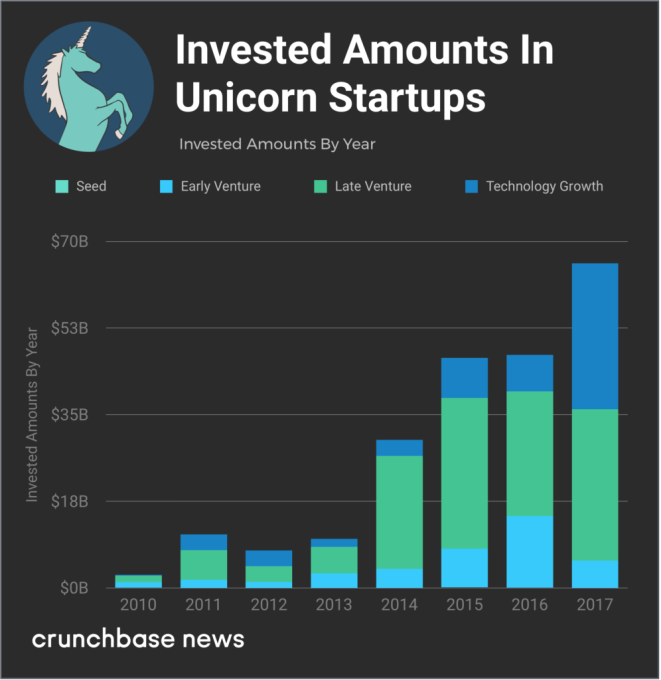 Newcomers also joined the unicorn club for the first time in 2017, albeit at a slightly slower pace than the preceding two years. For all of 2017, 60 new startups were added to the unicorn list. This compares to 66 newly minted unicorns in 2016 and the record-setting 2015 with 99 newcomers.

Below, we break down the leading locations for new and existing unicorns, top sectors for investment capital, exits and a few other trends affecting the space.

The vast majority of unicorns are headquartered in either the U.S. or China, and that’s also the case for newcomers to the Unicorn Leaderboard.

In 2017, both the U.S. and China continued to mint new unicorns at a steady clip. A total of 29 U.S. companies inked their first funding round at a valuation of a billion dollars or more, up from 22 the prior year. In China, 24 new unicorns joined the leaderboard, down from 32 in 2016. Europe and Southeast Asia, meanwhile, also contributed a few unicorns.

In the chart below, we look at new entrants, categorized by country: 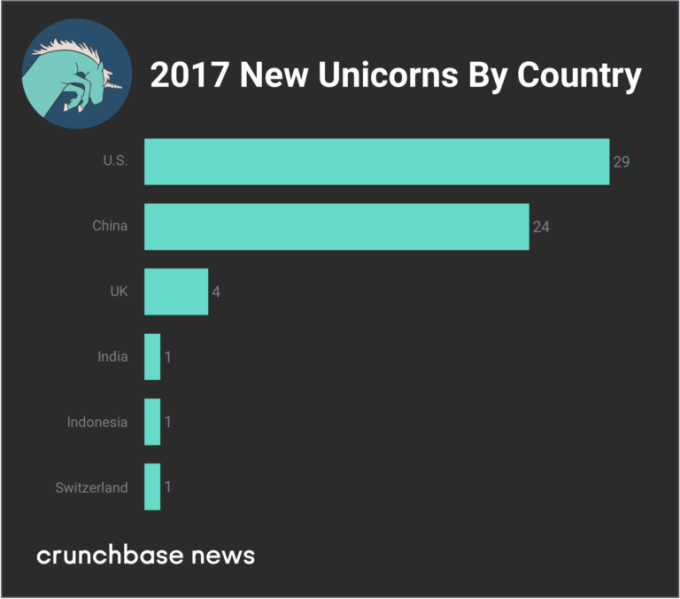 Unicorn investors showed a particularly strong appetite, however, for companies in a handful of sectors.

Ridesharing, in particular, had a strong funding year, with companies in the space taking more than 10 percent of all unicorn investment. That was largely attributable to billion and multi-billion dollar rounds for Lyft, Grab, Ola and Didi Chuxing.

Bike-sharing was also big. Two new entrants onto the unicorn list came from that space: Ofo and Mobike. However, concerns arose later in the year over whether consumer demand could support the ballooning bike supply. 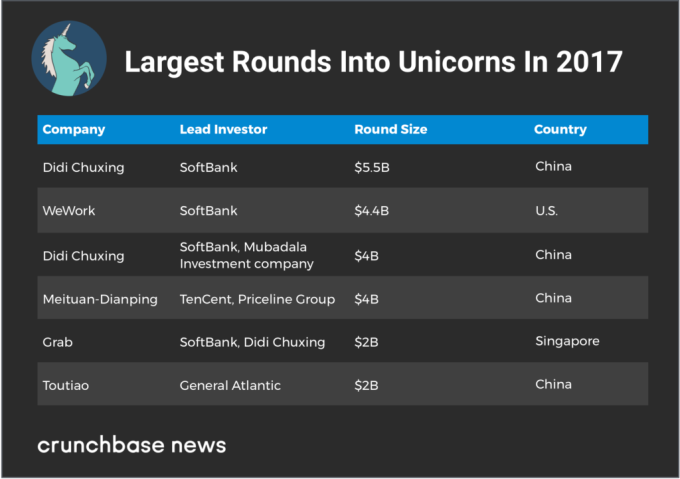 So a lot of unicorns are raising big rounds. But is there any sign members of the group will eventually produce returns for investors?

Acquisition activity, meanwhile, was weaker. There were just seven recorded M&A exits involving unicorns in 2017, down from 10 in 2016. AppDynamics was the highest-performing exit at 95 percent over its last private valuation. For the remaining companies that exited, all appear to have been below or at their last private valuation.

In the chart below, we look at IPO and M&A counts for unicorns over the past seven years: 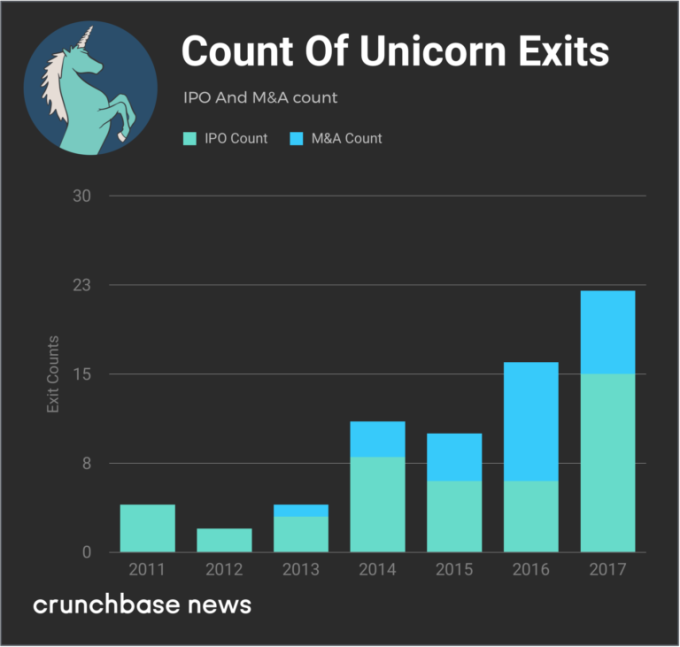 In the chart below, we look at some of the top performers based on the post-IPO percentage gains over their last private valuations: 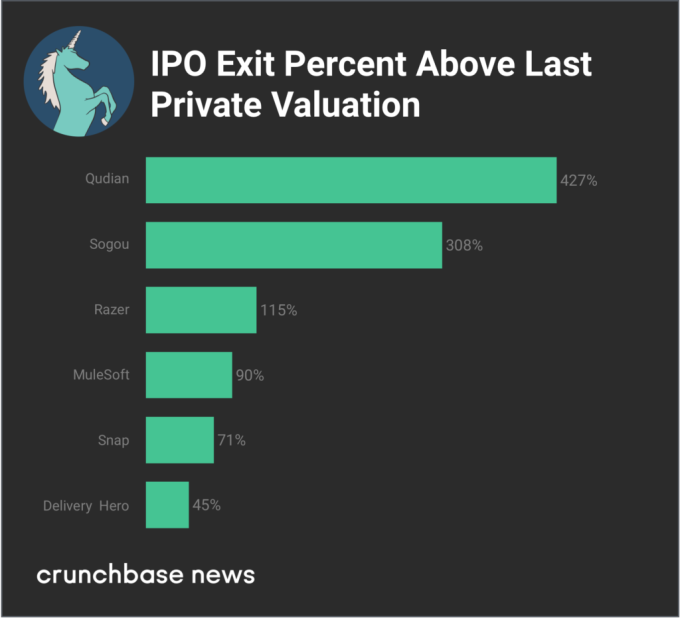 Lately, going public seems to be a better option for investor returns. If the company goes out below its last private valuation, that multiple can improve if it grows its market and public shareholders boost the stock. For an M&A transaction, the price is set and either late-stage investors have built in protections or are losing money at those exit prices.

Averages point to more exits ahead

So what does that say about the current crop of still-private companies? Because more than 150 companies out of 263 have been on the Unicorn Leaderboard for more than two years, we expect exits to increase, given the backlog.

Special thanks to Steven Rossi who manages the Crunchbase Unicorn Leaderboard.