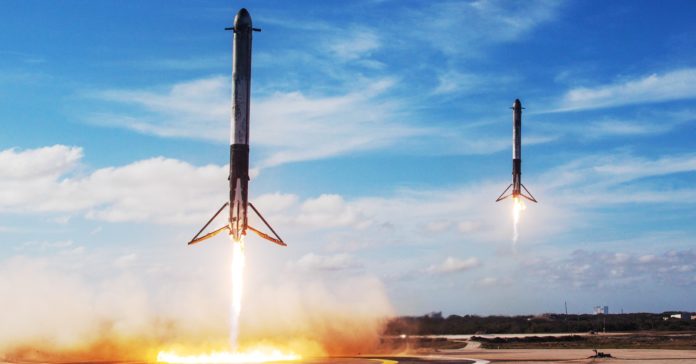 You might think the coolest part of the SpaceX Falcon Heavy test was the Tesla with a spaceman riding inside, flying out into space. Yeah, sure, that part was cool. But for me, the best part was this footage of the Heavy’s two side boosters returning to the launch pad.

There are a bunch of cool physics things you can do with a video like this. For me, I’m going to answer two questions. First, how far away was this camera from the boosters when they turned on the engines? Second, what kind of acceleration did the boosters have while slowing down?

Watch the video above and be sure to have the sound on. Notice that you see the rockets turn on before you hear them? Actually, there are several sounds and I’m not exactly sure what each one is. I know there are multiple sonic booms—but I’m not sure if they happen before or around the same time as the rocket engine. Actually, Destin from Smarter Every Day has a very nice video about the sounds of the Falcon Heavy launch—listen to it with earphones.

So, let’s assume that the really loud sound is from the engines turning on. We see them before we hear them because light travels way faster than sound. In fact, it wouldn’t be crazy to assume that the light from the engines travels to the camera in zero time—at least that’s what I’m going to do. This means that the time between seeing the rockets and hearing them is due to sound traveling over some distance. By knowing the speed of sound and the time difference, I can calculate the distance. In normal conditions, the speed of sound is approximately 343 m/s. From the video, the time between the flash and the sound is about 9.8 seconds. Here is the calculation of the distance.

That seems pretty close—just a little bit over 2 miles away. But that also shows you how loud these things are. Now, you could use this distance and try to find the exact location of the observing camera. Oh, here is something for you to try if you want a homework question: Look at the difference between the time the rockets turn off and the camera stops hearing the sounds. This could be used to find the distance from the camera to the landing point (rather than the distance to the rockets in the air). You could then use this to estimate the altitude of the rockets when the rockets turn on.

Now for the second question: What was the acceleration of the rockets during the landing phase? I am going to start with an assumption—that the rockets were traveling at the speed of sound at the time of rocket ignition. This probably isn’t exactly true, but it should be around that speed. The only other thing I need is the acceleration time. This isn’t too difficult to see both when the rockets fire and when they touch down. From this, I get a thrust time of 15.6 seconds.

That’s a fairly reasonable acceleration—just over 2 g’s. Two things to note. This is the magnitude of the acceleration—so I left off the negative sign. Also, this is the average acceleration. It’s very possible that some parts of this landing had accelerations higher than 22 m/s2.

If you want, you can try to get the position vs. time for the landing boosters—but it might be difficult from this video as it’s not entirely stable.