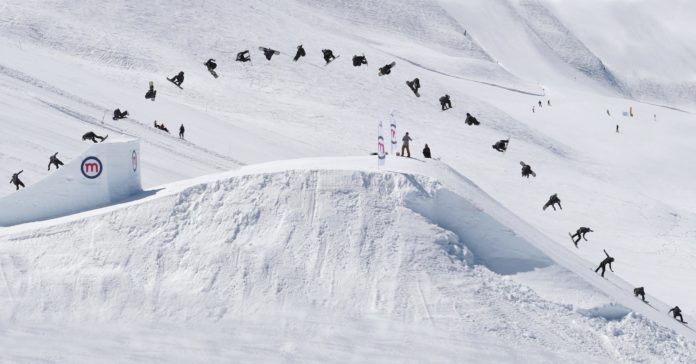 Behold the stomach-clenching spectacle of the quad cork 1800. The dizzying snowboarding trick—first landed by British Olympian Billy Morgan, above—involves catapulting off a ramp into four off-axis flips (called corks) and five full spins. Only four people have ever completed the 1,800-degree stunt. But this month in Pyeongchang, South Korea, expect to see more attempts as elite winter athletes compete in the Olympic debut of Big Air, an event in which boarders barrel off a 110-foot-tall ramp to perform seemingly impossible flips and spins. We enlisted physicist John Eric Goff, author of Gold Medal Physics: The Science of Sports, to break down the forces at play behind the quad cork 1800.

Olympic boarders will accelerate down 240 feet of slope, 39 degrees at its steepest, before hurtling off the ramp. Speed is key here: Too slow, and they won’t get enough air to complete four flips. Goff estimates Morgan hits approximately 40 mph at takeoff.

Achieving the quad cork’s tricky combination of flip and spin requires a simultaneous trunk twist and ab­dominal crunch. That quick movement likely generates about 50 foot-pounds of torque, 1,000 times the torque it takes to turn your head.

As his body spirals through the air, Morgan crouches and grabs his board. The smaller he can tuck—minimizing the moment of inertia—the faster he rotates. During the first cork, he throws his left arm out to the side to adjust his rotational direction.

Morgan pulls both of his arms into his chest like a twirling figure skater to pick up the pace. He needs to spin as quickly as possible to complete all five rotations before touchdown, averaging a whiplash-inducing 1.7 revolutions per second.

As he completes the last cork, Morgan throws out his arms and straightens his body to slow the rotation. He hits the ground going approximately 50 mph with about 450 pounds of force on each leg, Goff says, about half the force it takes to fracture a bone.

Morgan lands with his board at a 14-degree angle to decelerate gradually. He bends his knees as he touches down, which extends his collision time and distributes the force. All told, he executes the trick in 2.9 seconds of hang time, soaring 133 feet over the snow.