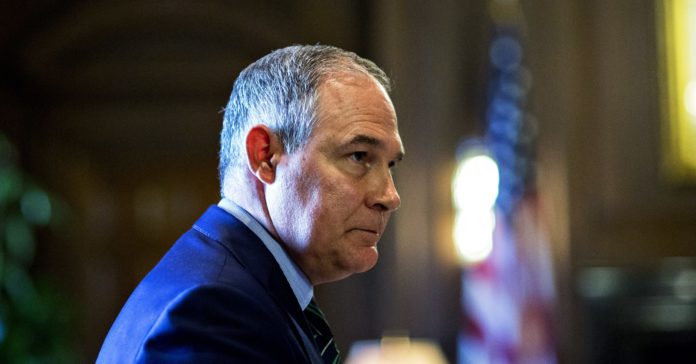 If you’re curious about bed bugs, radon gas, or toxic waste in landfills, the EPA website has got you covered. But if you are interested in climate change, you might better off going somewhere else instead—say over to NASA.gov or even the Department of Energy.

The phrase “climate change” hasn’t been entirely eliminated from EPA.gov, but you need to follow a winding path to encounter it. From the site’s homepage, you first follow a link to environmental topics, including, at the top of the list, air. Click on “greenhouse gas emissions” on the page of air-related topics and you’ll find a link to “Climate Change Home”—which leads to a rather unwelcoming destination. “This Page is Being Updated,” its headline states. “We are currently updating our website to reflect EPA’s priorities under the leadership of President Trump and Administrator Pruitt,” states the text.

In the year he’s been in office, EPA administrator Scott Pruitt has personally directed his webmasters to remove climate-related content on the website, scrubbing material that doesn’t fit his pro-business goals of rolling back regulations and casting doubt on the science of global warming and climate change. Under Pruitt’s orders, EPA managers removed pages on climate change science and information about the Clean Power Plan, an Obama-era effort to regulate carbon dioxide emissions from fossil-fuel burning plants

Those pages were replaced by links to President Trump’s executive order to repeal the Clean Power Plan, according to new e-mails obtained by the Environmental Defense Fund and 11 other other environmental and legal groups through a Freedom of Information Act request.

In one April 2017 email to colleagues in the EPA’s communications office, Lincoln Ferguson, an adviser to Pruitt, asks how close they are to removing and replacing the Clean Power Plan section. “The Administrator would like it to go up ASAP. He also has several other changes that need to take place,” Ferguson wrote, according to the e-mails provided by the EDF.

J.P. Freire, then the head of communications, responded, “You can tell him we … are just finishing up.”

Ferguson then asked if the change could happen that day: “Just asking because he is asking.”

Ben Levitan, senior attorney for the EDF, notes that the EPA is still accepting public comments about the Clean Power Plan until April 26. It’s just that the public won’t be able to find out much about the scientific rationale behind the plan. “A lot of the supporting materials that made the benefits of the plan more discernible are gone,” Levitan says, like legal info and various fact sheets about how the plan works. “One of our concerns is if people go to EPA’s website they might assume they can get the information they need to write informed comments, it might not be clear how much information has been removed,” he said.

The EPA holds public hearings on Pruitt’s plan to repeal the plan next month in Kansas City, Mo., and in March in Gilette, Wyoming. Afterward, Pruitt will make a final decision on its fate. The Supreme Court had put the plan on hold in early 2016 in the midst of litigation by various states and power industry groups.

While Pruitt isn’t breaking any laws by changing the website, the EPA’s own mission statement notes that the agency’s purpose is “to ensure that all parts of society—communities, individuals, businesses, and state, local and tribal governments—have access to accurate information sufficient to effectively participate in managing human health and environmental risks.”

Elections, and new administrators, have consequences. But contrast Pruitt’s sanitized EPA website with NASA’s “Vital Signs of the Planet,” which broadcasts the cold, hard facts of global warming in a easy-to-read banner: carbon dioxide levels in the atmosphere (407.62 ppm), global temperature (up 1.7 degrees F since 1880), the loss of Arctic sea ice (-13.2 percent per decade), and loss of land ice (286 gigatons/year). The space agency says it lets scientists and editors review the climate information that agency publishes, according to NASA headquarters spokesman Scott Cole.

“Editorial oversight is performed by the NASA scientists and web editors that maintain the site at the [Jet Propulsion Laboratory] center, and all content posted to the sites is based on editorial decisions by those scientists and web staff,” Cole said in an e-mail to WIRED. “This has always been standard operating procedure at NASA.”

Even the Department of Energy makes it easy for visitors to find out information about the causes of climate change, the effects of warming temperatures on the power grid, and how various technologies can reduce greenhouse gases.

One expert notes that the Supreme Court has told the EPA to regulate carbon dioxide and that it needs to find an alternative to the Clean Power Plan. “If the EPA has a better idea about how to do this than the CPP, they should be telling us how, clearly and plainly, on their website and elsewhere,” says Edward Maibach, professor of climate change communication at George Mason University. “EPA’s decision to abandon science and science-based decision-making is harmful to EPA, to our nation, and to all Americans. In the end, I think it will prove to be harmful to the Republican Party too.”

While NASA’s website seems to be the gold standard for climate information, it’s not clear how long that will remain the case. NASA is currently without an administrator, and Rep. Jim Bridenstine’s nomination to lead the agency is being held up by objections from Florida Democratic Senator Bill Nelson. Nelson objects to Bridenstine’s previous statements on climate change, and his attacks on fellow Florida Senator Marcio Rubio.

Others who have talked to Bridenstine since his nomination say he has regretted his earlier remarks and will not interfere with NASA’s earth and climate science research.

But that won’t sway the EPA. On Tuesday, Pruitt appeared before a Senate panel and faced tough questions from Democratic senators about his efforts to reduce regulations on pesticides, air pollution, and the pace of Superfund cleanups. He said he still plans to organize a “red team” to debate the science of climate change against a “blue team” of mainstream scientists on the issue.

GizmoCrazed - December 13, 2017 0
(Credit: FAO Panama) Indigenous tribes from the Pacific Northwest to the Amazon Basin face a similar set of challenges: How to manage their lands, defend...

What CBD Does to Your Body

This is how to use the new iOS 11 Files app