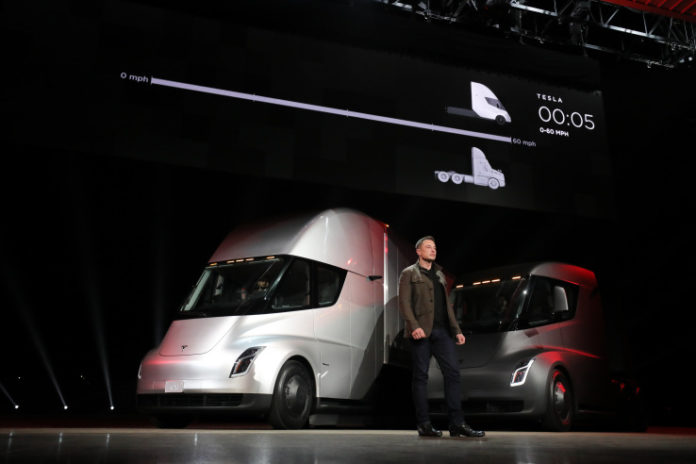 Tesla is going to be working with its first pilot customers for its all-electric Semi truck to build charging stations at their shipping facilities, Reuters reports. We know relatively little about how Tesla will be piloting its truck thus far, but this new info sheds some light on the charging component of the puzzle.

Tesla will be working with Anheuser-Busch, Pepsi and UPS at least to build out these origin point chargers, the report claims, and then the initial routes which the Semis will run will be short enough that the trucks can go out and back again on a single charge. Pepsi told Reuters that it’ll look into potentially partnering with other companies using Tesla trucks to create combined charging facilities.

The trucks, which obviously have far greater battery capacity than Tesla’s consumer vehicles, would require charging stations that can deliver more power, more quickly, and Musk has previously suggested Tesla might build a network of so-called “mega-chargers” that gather power using solar panels, and that can deliver a full charge to a Semi in as little as 30 minutes using high-capacity power delivery.

Tesla confirmed to Reuters that it’s in discussions with larger clients regarding construction of charging infrastructure for the vehicles, and pilot client Loblaws also said it’s hoping to use solar energy, and is also looking at other potential partners beyond Tesla to make charging facilities work.

The Tesla Semi, unveiled last year, will have a max range of as many as 500 miles, per the company, and starts at $150,000 for a lower-range version. The automaker is hoping to have the first of these vehicles operating on roads by sometime next year.