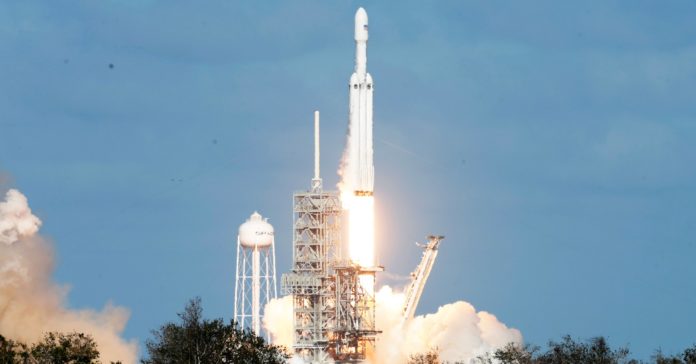 Florida’s space coast roared to life on Tuesday as SpaceX fired off its long-in-development Falcon Heavy rocket from Kennedy Space Center. Tens of thousands of spectators made the pilgrimage from across the country to experience the immense heat and thunderous roar of the rocket’s 5 million pounds of thrust. Upon liftoff, at precisely 3:45 pm Eastern, the Falcon Heavy rocket took its place as the most powerful launch vehicle in the world.

About 3.5 miles away from Pad 39A, the site that hosted the first crewed mission to the moon in 1969, hundreds of reporters dispatched from around the world gathered at NASA’s press site to witness the maiden flight. In the shadow of the largest single-story building in the world, NASA’s towering Vehicle Assembly Building, and in front of the agency’s iconic ticking countdown clock, onlookers gasped as cloud plumes quietly billowed out from beneath the Falcon Heavy. The few moments of silence came quickly to an end as the thunderous firing of the rocket’s 27 engines startled the crowds that packed the coastline for miles and miles.

Flying atop the Falcon Heavy is SpaceX CEO Elon Musk’s cherry-red Tesla Roadster, carrying a passenger—sort of. SpaceX revealed last weekend that a mannequin wearing the company’s new spacesuit would ride in the driver’s seat of the electric sports car. Nicknamed Starman, the dummy will listen to some tunes on its long and endless journey: David Bowie’s Space Oddity.

Following the Roadster’s deployment to its preliminary orbit, the Falcon Heavy’s recycled side-boosters came flying back to Cape Canaveral for nearly simultaneous twin touchdowns in separate landing zones. The Falcon Heavy’s central core, meanwhile, was sent back toward SpaceX’s autonomous drone ship, Of Course I Still Love You. The live video feed of the ship cut out before the core approached; SpaceX has yet to confirm if the core successfully landed.

While this is just a test flight for the Falcon Heavy, SpaceX’s stated goal is to get the Roadster about 250 million miles away from Earth, its journey tracked by cameras and sensors on the rocket’s upper stage. It’s heading to chase Mars around the sun, sharing the same orbit—forever approaching the red planet, but never actually reaching it.

SpaceX decided to coast the Falcon Heavy’s single-engine second stage in orbit for six hours to demonstrate missions typically flown by the US Air Force, which has already purchased an upcoming launch on the Falcon Heavy. Musk thinks SpaceX could launch another Falcon Heavy soon following the successful demo launch. “The first-stage engines are all the same, the side boosters are the same as a regular Falcon 9, but with a nose cap on,” Musk said in a press call the day before launch. “It’s really the production rate of the center core.”

As the Falcon Heavy lifted slowly off historic Pad 39A, now leased by SpaceX from NASA, the anxiety of the site being left in ruins from a launch failure began to subside. In the lead up to the launch, Musk said not destroying what he considers the Times Square of pads would be a win for SpaceX. “It would be a really huge downer if it blows up. But hopefully, if something goes wrong, it goes wrong far into the mission so we at least learn as much as possible along the way,” said Musk at Kennedy Space Center on the eve of the flight. “This is a test mission. We don’t want to set expectations of perfection by any means. If it just clears the pad and doesn’t blow it to smithereens.”

The billionaire claimed that an unexpected explosion of the Falcon Heavy at liftoff would be the equivalent of 4 million pounds of TNT—which would nearly demolish the pad that also hosted missions of NASA’s celebrated Space Shuttle program. This was part of the reason that getting Falcon Heavy safely off the pad was so critical, and even considered a win at that point into Tuesday’s launch. Much was at stake.

SpaceX leased the pad from NASA and spent nearly $20 million renovating it to launch Falcon Heavy and missions for the upcoming Commercial Crew Program in which NASA crew will be taxied to the space station. “It’s going to take us at least 9 to 12 months to get the pad back in action,” Musk responded when asked what a fallout from a pad explosion would look like. Musk explained before the Falcon Heavy demo launch that an in-flight failure, rather than an explosion at 39A, wouldn’t affect SpaceX’s day-to-day and SpaceX “could launch another in three to four months.”

While the Falcon Heavy has missions on the books, SpaceX’s crewed lunar mission is no longer one of them. As Musk announced last summer, SpaceX is moving forward with building a massive multi-purpose spacecraft it calls BFR that will essentially make its current fleet redundant, including the Falcon Heavy. Musk says if the company can’t get its BFR off the ground soon, they could potentially return to the idea of launching Falcon Heavy toward the moon with crew, which Musk claims it is “absolutely” capable of. But for now, SpaceX is planning for all crewed deep space missions, moon included, to be launched on BFR.

“You can toss a Dragon way past the moon. Actually further than they went during Apollo. That was our plan until last year,” Musk explained yesterday. “And then we thought well, maybe we can make BFR development go faster than we thought, if that’s true then there won’t be much point in qualifying Falcon Heavy for launching Dragons. So we kind of tabled the Crew Dragon on Falcon Heavy and focusing our energies on BFR.”

But for today, at least, SpaceX’s cheering employees in Florida will keep their energy focused on Falcon Heavy.

GizmoCrazed - February 26, 2016 0
When I first saw this fantastic Lego gaming PC I just thought wow what a great idea and how someone hadn’t thought about doing...

Android 4.0 Ice Cream Sandwich — Everything You Need To Know

Volkswagen NILS: The Electric F1 Car Of The Future [PICS]