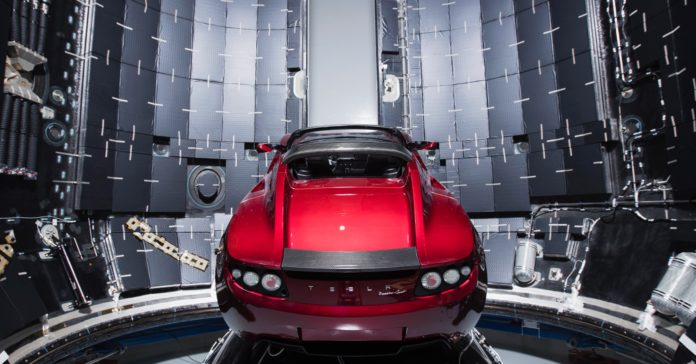 After nearly seven years of varying concepts, redesigns, and delays, SpaceX is poised to launch the Falcon Heavy rocket next week on its maiden flight. Last week, SpaceX performed a hold-down firing of the massive rocket’s 27 engines, creating a towering exhaust plume and jolting the space coast with over 5 million pounds of thrust. It was the most powerful engine test ever conducted at Kennedy Space Center—and with a successful liftoff, the Falcon Heavy would be the most powerful launch vehicle in the world.

At Cape Canaveral, the nearby Visitor Complex has already sold out of its close launch viewing spots for Tuesday, February 6. That’s when SpaceX will attempt to launch its new rocket from Space Launch Complex 39A, during a three-hour window opening at 1:30 PM Eastern. Apollo 11 astronaut Buzz Aldrin, who launched off the same pad toward the moon in 1969, will be in there. Another notable audience member? Harrison Ford, who has a special connection with the rocket: The Falcon Heavy gets its name from Han Solo’s ship in Star Wars.

For most of the world, a livestream view will have to do, and SpaceX CEO Elon Musk has been encouraging people to tune in. But he’s managing expectations: Falcon Heavy may not reach orbit, and simply not destroying such a historic launch pad would be a “win.” And though SpaceX originally signed a 20-year lease with NASA for the facility, that doesn’t guarantee they’ll always be a tenant.

At least a dozen reporters from New York City alone are flying into Cape Canaveral next week to cover the mission—about the number that show up, total, for routine satellite launches. It’ll be a far cry from the crowd that Musk spoke to in 2011, at the first public unveiling of the Falcon Heavy concept.

At the National Press Club in Washington, DC, the billionaire stood awkwardly between two identically printed posters of Falcon Heavy mock-ups—significantly smaller than the vehicle SpaceX eventually built. The low-rent presentation offered a grounded vision from a Musk who had not yet launched into the consumer flamethrower market. The Space Shuttle’s final launch was just two months away, Musk noted, leaving NASA without a crew vehicle and a powerful launcher. Falcon Heavy could fill that gap.

But since that first glimpse in 2011, the Falcon Heavy has been in development hell. An in-flight explosion of a Falcon 9 in 2015—followed by a fuel tank explosion in 2016 that destroyed the rocket, a customer satellite, and the launch pad—set the company back months, if not years. SpaceX bounced back in 2017, completing 18 missions, including 14 booster recoveries and 5 reflights of a previously-flown rocket. But no Falcon Heavy just yet.

SpaceX had hoped to cap 2017 with the debut launch of its heavy-lift vehicle. The company would need the Falcon Heavy to make good on a promised mission: An ambitious attempt to launch two private citizens to lunar orbit in late 2018. At first, SpaceX sold it as a glorious return to the moon for the first time since the final Apollo mission in 1972. Months later, Musk would joke that those two individuals are “brave” for flying on the mission—aboard a still-untested Crew Dragon spacecraft.

SpaceX originally had another mission planned for Falcon Heavy in 2018, too: Red Dragon. A variant of the Crew Dragon, these mission concepts would launch to Mars on supply drops, capitalizing on the Hohmann transfer window that opens every 26 months, shortening the trip between Mars and Earth. SpaceX sold Falcon Heavy as a regularly-scheduled train, establishing a cargo route between the two planets. But even with interest from NASA, last summer Musk announced that SpaceX had abandoned the concept, diverting resources into what the company describes as multipurpose interplanetary spacecraft.

Despite these big plans, though, it was only in March of last year that the massive rocket began to take shape at SpaceX headquarters in Hawthorne, California. First, it was just a full-sized mockup of the rocket’s center booster, without engines. SpaceX shipped the massive piece of hardware to its facility in McGregor, Texas for structural load tests—the ones that would show if the vehicle could actually handle the weight it was designed to lift.

Then SpaceX geared up to build the real center booster on the factory line back in Hawthorne—the very same that will fire up in next week’s demonstration flight. As for the Falcon Heavy’s side-boosters, SpaceX decided that it would use previously-flown Falcon 9 rockets.

That choice was cockier than it seems. SpaceX had chosen to use reusable rockets as early as September 2016—before it had ever successfully launched a used booster. (The company accomplished that feat for the first time last March.) And since then, the company has only grown more confident in its recovered fleet of rockets. WIRED learned from sources with knowledge of the manifest that in 2018, the company intends to fly 50 percent of its 30 planned missions on recycled rockets.

SpaceX will continue developing its reusable hardware, aiming to recover a booster and relaunch it within 24 hours. To do that, the company is leaning on the next and final version of the Falcon 9, the Block 5. The upgraded rocket will have more thrust, permanent landing legs, and a new layer of thermal protection coating—features that will end up in the Falcon Heavy, too. Eventually.

For now, SpaceX will content itself with testing small reusability-enhancing elements. Like two sets of new titanium cast fins—which, if the Falcon Heavy flight goes according to plan, will navigate two side boosters back to ground at Cape Canaveral. Flown just once before, the grid fins will be standard on the Block 5 booster; they’re meant to improve flight control and survive the blazing hot atmospheric reentries better than previous aluminum fins.

And the fins might improve the chances of success for these risky recoveries. Each Falcon Heavy side booster is flying a round-trip next week with a nosecone instead of its usual interstage and payload-carrying second-stage, and SpaceX has never tried a landing with a nosecone intact. To reduce risk even further, SpaceX is staggering the boostback burns, letting each side booster touch down separately.

SpaceX hopes to fire off Falcon Heavy on Tuesday, but just in case, it has reserved the next day as a backup. Wait any longer and SpaceX could be delayed again; on February 8, the extension of federal funding signed by the president will expire. Because SpaceX operates on government property with the assistance of military personnel, it can’t launch in the middle of a shutdown.

The Falcon Heavy launch has already been delayed by the government once; SpaceX had to push the date of its static test fire during the mid-January shutdown. Which is troubling for a company that’s lobbying the government to limit launch license regulations to increase mission cadence. In 2016, Musk presented concepts at the International Astronautical Congress that envisioned the company launching its first human mission to Mars from pad 39A—but SpaceX’s future at Kennedy Space Center might not be that long-lived.

WIRED has learned that SpaceX is actively considering expanding its San Pedro, California facility to begin manufacturing its interplanetary spacecraft. This would allow SpaceX to easily shift personnel from headquarters in Hawthorne. But it would put an entire country between the largest spacecraft ever brought to manufacturing and Florida’s space coast.

Sources within the company believe it will launch those first long-range missions from the facility SpaceX is building in Boca Chica village near Brownsville, Texas. And the Houston Chronicle reported this week that SpaceX is now seeking an additional $5 million in funding to develop the launch complex on top of the $15.3 million already pledged by the Texas Spaceport Trust Fund.

If SpaceX feels like it has outgrown Kennedy, the Falcon Heavy may be its last new launch vehicle to make a debut at the historic site.

GizmoCrazed - February 20, 2013 2
You've made it to the office for work, but you have an emergency and need to leave right away! Or maybe it isn't really...

Back to the Moon for Real: A Conversation with Private-Spaceflight Evangelist...