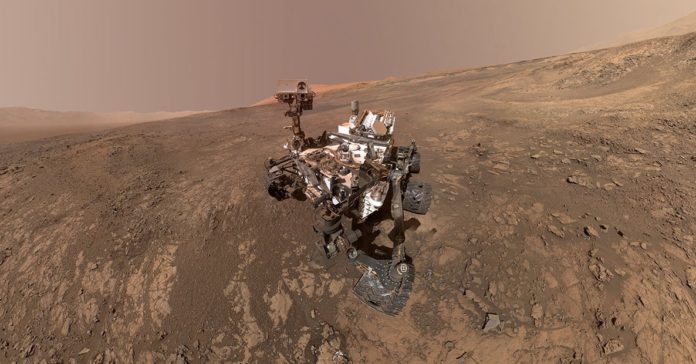 This week, we got a special present from the Mars Science Laboratory—better known as the Curiosity rover. Every now and then the SUV-sized rover sends back a photo of itself, as instructed by its human operators at NASA’s Jet Propulsion Laboratory back on Earth. Its large articulating arm extends out, snapping a series of images that human helpers can stitch together. Voila: robot selfie!

Curiosity has been busy these last five years as it has moved along the inside of Gale Crater. In 2014, it arrived at Mt. Sharp, the highest peak inside the crater—and it has been slowly climbing the grade ever since. Since the rover’s dramatic arrival on Mars, it has found evidence of water, interesting minerals, and some of the strangest rocks any Martian could find.

Today, it’s driving along the Vera Rubin ridge, a slope rich in clay minerals that require water to form—and in this case, ancient water. Gale Crater is one of the most ancient regions on Mars, making the rover and its human operators the equivalent of a Martian Indiana Jones.

Not ready to come back down to Earth? Check out the full collection of space photos here.