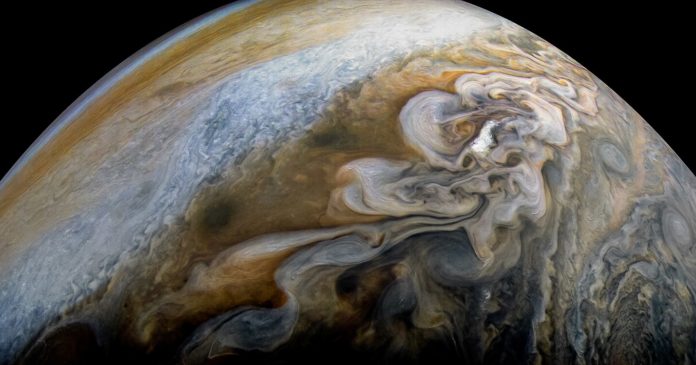 This week in space we’re staying within our solar system. After all, there’s a lot to see! We’ll begin with our neighbor Mars and its moons Phobos and Deimos. Mars only has the two, and they’re very small—Phobos is only seven miles wide and Deimos, four miles. Several mission proposals have suggested we explore these moons before humans plant their boots onto the Martian soil; the moons are likely made of Mars-type stuff, and their low gravity would make it relatively easy to launch a return mission. Imagine an astronaut with a control pad while hanging out on Phobos, controlling a scientific rover on Mars—it might happen!

Next we’ll speed by Jupiter alongside the Juno spacecraft. Juno completed its eleventh orbit of the planet on February 7, capturing some spectacular images in the process. And it’ll keep orbiting until 2022, studying the interior structure of the planet and the function of its bizarre and picturesque atmosphere.

Finally, we’ll end our journey on Saturn’s surface—just like Cassini did. The spacecraft de-orbited into the planet on September 15, 2017, collecting science data until it broke apart, ending a magnificent 13 year mission. We are learning more about Saturn just from the way the spacecraft died; Cassini is sure to deliver information long after its demise.