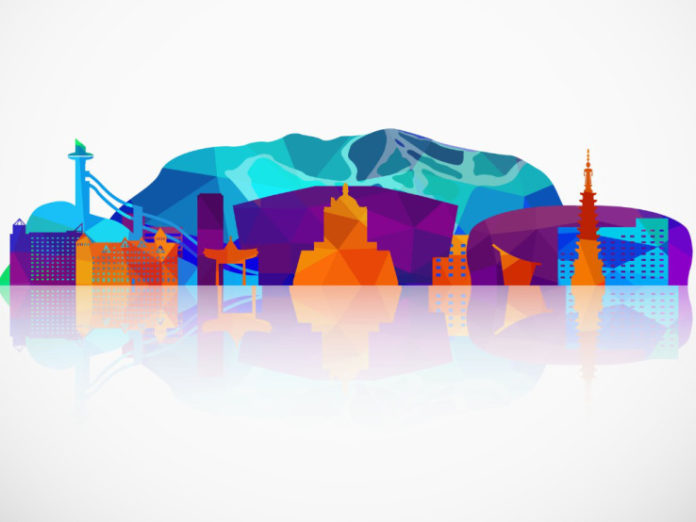 Back in 2011, when South Korea won its longshot bid to host the 2018 Winter Olympics, the country wasn’t widely recognized as a destination for ski and snow lovers. It wasn’t considered much of a tech startup hub either.

Fast forward seven years and a lot has changed. For the next 10 days, the eyes of the world will be on the snowy slopes of PyeongChang. Meanwhile, a couple of hours away in Seoul, a burgeoning startup scene is seeing investments multiply, generating exits and even creating a unicorn or two.

While South Korea doesn’t get a perfect score as a startup innovation hub, it has established itself as a serious contender. More than half a billion dollars annually has gone to seed through late-stage funding rounds for the past few years. During that time, at least two companies, e-commerce company Coupang and mobile-focused content and commerce company Yello Mobile, have established multi-billion-dollar valuations.

To provide a broader picture of how South Korea stacks up in terms of attracting startup investment and building scalable companies, Crunchbase News put together a data dive looking at funding totals, significant investments, exits and active investors.

Here are some of our findings.

Venture funding for South Korean startups started to take off in 2014, per Crunchbase data. Previously, venture funding rounds that made it into the database only totaled in the tens of millions of dollars annually. But about four years ago, the numbers started rising dramatically. 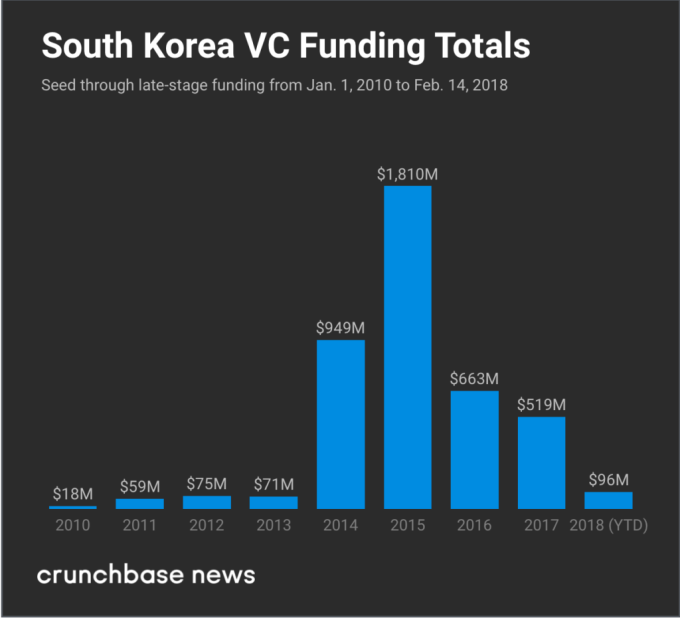 Big, later-stage rounds pushed up the totals. In the past four years, more than two dozen companies have closed financings of $10 million or more, including a few unicorns for substantially larger sums. One of those, Coupang, has raised $1.4 billion from venture and private equity investors to date.

Totals have trended lower in the past couple of years, which may be attributed to fewer giant rounds. For instance, more than half of the 2015 total came from a $1 billion SoftBank investment in Coupang.

While totals are down some over the past few quarters, South Korean startups have continued to attract attention and big checks from both domestic and overseas investors.

The largest single funding in the past year went to TMON (short for Ticket Monster), which raised $115 million last April at a reported $1.4 billion valuation. This is the second time scaling up with growth funding, as the Seoul-based company already provided an exit to early investors years ago. Coupon site LivingSocial bought the company in 2011, then sold itself to Groupon, which then spun out the Korean company.

After TMON, the next-biggest funding rounds were for travel site Yanolja, which raised $55 million, and Snow, developer of popular selfie apps, which raised $50 million. In the chart below, we look at these and other significant financings from 2017 through today: 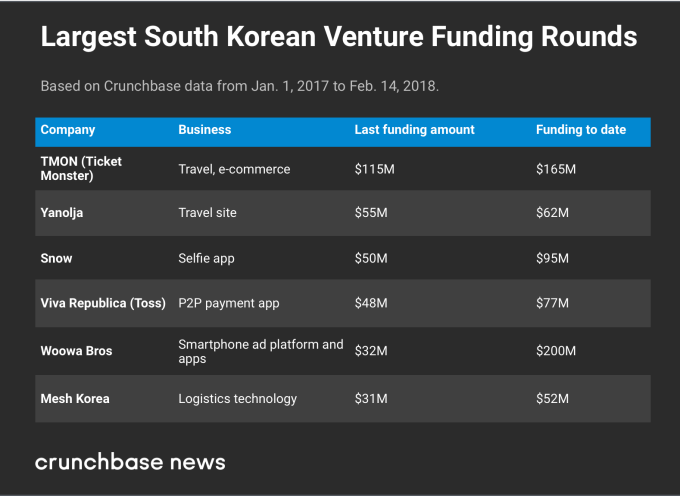 The list of top funding recipients includes a mix of startups focused principally on the Korean market and those attracting a broad international user base.

Companies focused on the domestic market find that Korea, with 50 million inhabitants and a highly urbanized, tech-savvy customer base, is big enough to support massively scalable businesses. Those in that camp include TMON and Coupang.

But Korea also has a record of building up major global companies, like Samsung, LG and Hyundai, to name the best known. So it’s not surprising to see companies with global ambitions among the top startups. In recent years, the leading Korean search engine, Naver, in particular, has been successful launching startups with global reach. The firm is a majority owner of the Japan-headquartered messaging app LINE, which went public last year and is valued at nearly $10 billion. Line and Naver are also majority owners of Snow.

It’s also possible to start local and later go global. In this camp is Viva Republica, a developer of a fast-growing mobile payments tool Toss, which got initial traction in Korea and is now setting its sights on expansion abroad.

Korea’s startup scene is attracting a large and diverse collection of investors, including Korea-based funds, corporate VCs, Silicon Valley venture firms and others.

A number of firms are repeat investors. Among the most active are Samsung, Altos Ventures, SoftBank Ventures Korea, Formation 8 (now Formation Group and 8VC), 500 Startups and Anchor Equity Partners.

The total pool of investors is much deeper, however. Crunchbase data shows that more than 150 angel, seed, incubator and VC and corporate venture investors have participated in funding rounds for Korea-based companies over the past five years.

Of course, not all recent bets on promising startups will turn out winners. But all in all, it appears that South Korean entrepreneurs have clearly put together a competitive lineup.