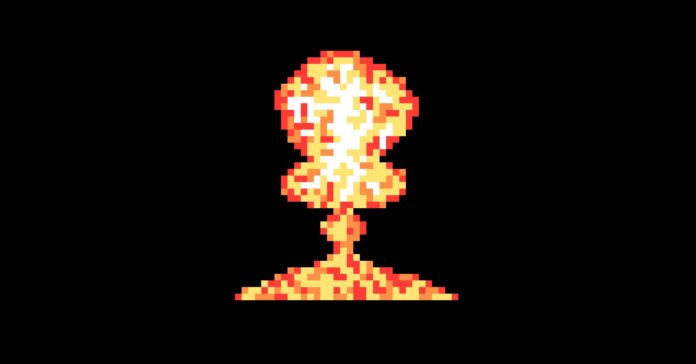 It will start with a flash of light brighter than any words of any human language can describe. When the bomb hits, its thermal radiation, released in just 300 hundred millionths of a second, will heat up the air over K street to about 18 million degrees Fahrenheit. It will be so bright that it will bleach out the photochemicals in the retina of the eyes of anyone looking at it, causing people as far away as Bethesda and Andrews Air Force Base to go instantly, if temporarily blind. In a second, thousands of car accidents will pile up on every road and highway in a 15-mile radius around the city, making many impassable.

That’s what scientists know for sure about what would happen if Washington, DC were hit by a nuke. But few know what the people—those who don’t die in the blast or the immediate fallout—will do. Will they riot? Flee? Panic? Chris Barrett, though, he knows.

When the computer scientist began his career at Los Alamos National Laboratory, the birthplace of the atomic bomb, the Cold War was trudging into its fifth decade. It was 1987, still four more years until the collapse of the Soviet Union. Researchers had made projections of the blast radius and fallout blooms that would result from a 10 kiloton bomb landing in the nation’s capital, but they mostly calculated the immediate death toll. They weren’t used for much in the way of planning for rescue and recovery, because back then, the most likely scenario was mutually assured destruction.

But in the decades since then, the world has changed. Nuclear threats come not from world powers but from rogue nation states and terrorist organizations. The US now has a $40 billion missile interception system; total annihilation is not presupposed.

The science of prediction has changed a lot, too. Now, researchers like Barrett, who today directs the Biocomplexity Institute of Virginia Tech, have access to an unprecedented level of data from more than 40 different sources, including smartphones, satellites, remote sensors, and census surveys. They can use it to model synthetic populations of the whole city of DC—and make these unfortunate, imaginary people experience a hypothetical blast over and over again.

That knowledge isn’t simply theoretical: The Department of Defense is using Barrett’s simulations—projecting the behavior of survivors in the 36 hours post-disaster—to form emergency response strategies they hope will make the best of the worst possible situation.

You can think of Barrett’s system as a series of virtualized representation layers. On the bottom is a series of datasets that describe the physical landscape of DC—the buildings, the roads, the electrical grid, water lines, hospital systems. On top of that is dynamic data, like how traffic flows around the city, surges in electrical usage, and telecommunications bandwidth. Then there’s the synthetic human population. The makeup of these e-peeps is determined by census information, mobility surveys, tourism statistics, social media networks, and smartphone data, which is calibrated down to a single city block.

So say you’re a parent in a two-person working household with two kids under the age of 10 living on the corner of 1st and Adams Streets. The synthetic family that lives at that address inside the simulation may not travel to the actual office or school or daycare buildings that your family visits every day, but somewhere on your block a family of four will do something similar at similar times of day. “They’re not you, they’re not me, they’re people in aggregate,” says Barrett. “But it’s just like the block you live in; same family structures, same activity structures, everything.”

Fusing together the forty-plus databases to get this single snapshot requires tremendous computing power. Blowing it all up with a hypothetical nuclear bomb and watching things unfold for 36 hours takes exponentially more. When Barrett’s group at Virginia Tech simulated what would happen if the populations exhibited six different kinds of behaviors—like healthcare-seeking vs shelter-seeking—it took more than a day to run and produced 250 terabytes of data. And that was taking advantage of the institute’s new 8,600-core cluster, recently donated by NASA. Last year, the US Threat Reduction Agency awarded them $27 million to speed up the pace of their analysis, so it could be run in something closer to real-time.

The system takes advantage of existing destruction models, ones that have been well-characterized for decades. So simulating the first 10 or so minutes after impact doesn’t chew up much in the way of CPUs. By that time, successive waves of heat and radiation and compressed air and geomagnetic surge will have barreled through every building within five miles of 1600 Pennsylvania Avenue. These powerful pulses will have winked out the electrical grid, crippled computers, disabled phones, burned thread patterns into human flesh, imploded lungs, perforated eardrums, collapsed residences and made shrapnel of every window in the greater metro area. 90,000 will be dead, nearly everyone else will be injured. And the nuclear fallout will be just beginning.

That’s where Barrett’s simulations really start to get interesting. In addition to information about where they live and what they do, each synthetic Washingtonite is also assigned a number of characteristics following the initial blast—how healthy they are, how mobile, what time they made their last phone call, whether or not they can receive an emergency broadcast. And most importantly, what kind of actions they’ll take.

These are based on historical studies of how humans behave in disasters. Even if people are told to shelter in place until help arrives, for example, they’ll usually only follow those orders if they can communicate with family members. They’re also more likely to go toward a disaster area than away from it—either to search for family members or help those in need. Barrett says he learned that most keenly in seeing how people responded in the hours after 9/11.

Inside the model, each artificial citizen can track family members’ health states; this knowledge is updated whenever they either successfully place a call or meet them in person. The simulation runs like an infathomably gnarled decision tree. The model asks each agent a series of questions over and over as time moves forward: Is your household together? If so, go to the closest evacuation location. If not, call all household members. That gets paired with likelihood that the avatar’s phone is working at that moment and that their family members are still alive, and that they haven’t accumulated so much radiation that they’re too sick to move. And on and on and on until the 36 hour clock runs out.

Then Barrett’s team can run experiments to see how different kinds of behaviors result in different mortality rates. The thing that leads to the worst outcomes? If people miss or disregard messages that tell them to delay their evacuation, exposing them to more of the fallout—the residual radioactive dust and ash that “falls out” of the atmosphere. About 25,000 more people die if everyone tries to be heroes, encountering lethal levels of radiation when they approach within a mile of ground zero.

Those scenarios give clues about how the government might minimize lethal behaviors and encourage other kinds. Like, dropping in temporary cell phone communication networks or broadcasting them from drones. “If phones can work even marginally, then people are empowered with information to make better choices,” says Barrett. Then they’ll be part of the solution rather than a problem to be managed. “Survivors can provide first-hand accounts of conditions on the ground—they can become human sensors.”

Not everyone is convinced that massive simulations are the best basis for formulating national policy. Lee Clarke, a sociologist at Rutgers who studies calamities, calls these sorts of preparedness plans “fantasy documents,” designed to give the public a sense of comfort, but not much else. “They pretend that really catastrophic events can be controlled,” he says, “When the truth of the matter is we know that either we can’t control it or there’s no way to know.”

Maybe not, but someone still has to try. For the next five years, Barrett’s team will be using their high-throughput modeling system to help the Defense Threat Reduction Agency grapple not just with nuclear bombs, but with infectious disease epidemics and natural disasters too. That means they’re updating the system to respond in real time to whatever data they slot in. But when it comes to atomic attacks, they’re hoping to stick to planning.