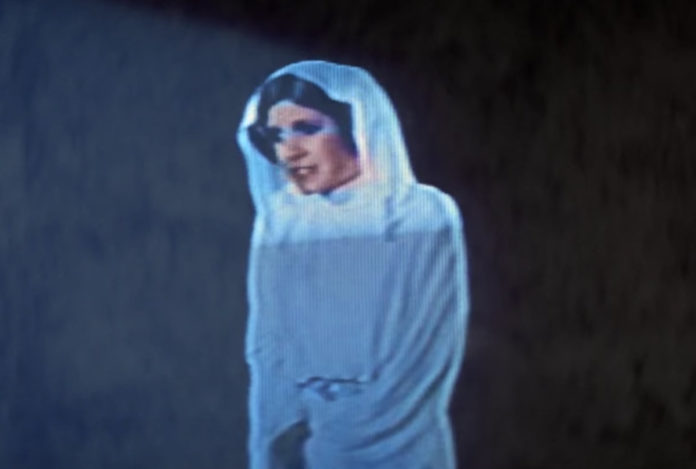 People think they want holograms, but they (usually) don’t. These are illusions, images trapped on two-dimensional surfaces that give the impression of a three-dimensional object.

What people really want are “volumetric images” — a display of free-floating light that actually takes up 3-D space, visible from all angles. (Bonus points if you can interact with it.) Many of the coolest movies have them, from Tony Stark’s displays in Iron Man, to the projection table in Avatar, and perhaps the most famous example, Princess Leia’s plea to Obi-Wan in Star Wars.

And now, according to a paper in Nature, so do we.

Caveats first: Lead author Daniel Smalley of Brigham Young University and his colleagues could only produce tiny images, fractions of an inch across. But that’s it — everything else about the technology, dubbed the optical trap display, seems legit. It really does create 3-D light structures. 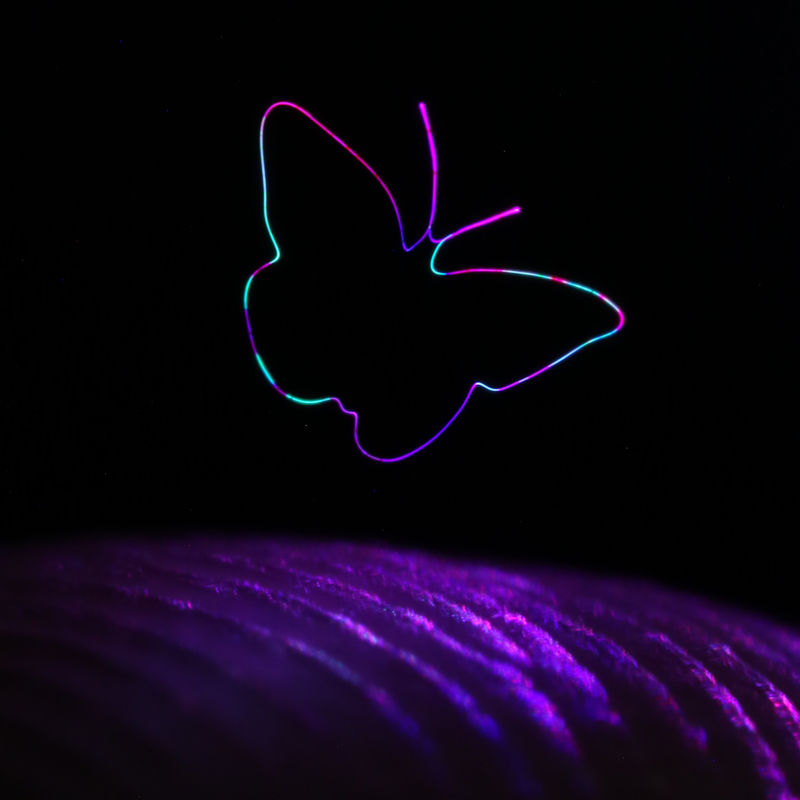 This floating butterfly was created with a single particle using a technique known as volumetric display.
(Credit: Smalley Holography Group)

To do this, Smalley’s team took advantage of the human eye, and how easy it is to fool. Using lasers, they trap and manipulate a single cellulose particle and guide it around in space to produce the desired image, while lights bounce off it at just the right times to give it the right color. The particle moves so quickly, human vision blurs its path together to look like a solid line, similar to how you can write words with sparklers in a long-exposure photo. Done over and over fast enough, and they can even create moving images.

In a Nature video, Smalley compares it to 3-D printing with light. Already, these images are extremely high resolution at 1,600 dots per inch (dpi).

As cool as this technology is — Smalley calls it a “Princess Leia-style display” in a Nature news story — there’s still work to be done. To up the size of these thing, and depict more complex moving images, his team will have to improve their control of those particles, and learn how to handle more than one at once. Smalley’s optimistic, saying in the same story, “If we make as much progress in the next four years as we made in the last, I think we will be successful making a display of useful size.”

Being able to control light like this would be a boon to anyone who depends on intricate visualizations, such as doctors learning their way around (and within) a patient’s body, or air traffic controllers who have to keep track of various moving objects in a 3-D space. Or, possibly, planning an invasion of the Na’vi or asking a wise old war buddy of your dad’s for help.

GizmoCrazed - February 9, 2013 1
Futuristic weaponry is far from reserved for SiFi films on TV anymore and military research around the world are pushing weaponry that is increasingly...

10 Most Interesting Facts About HIV/AIDS