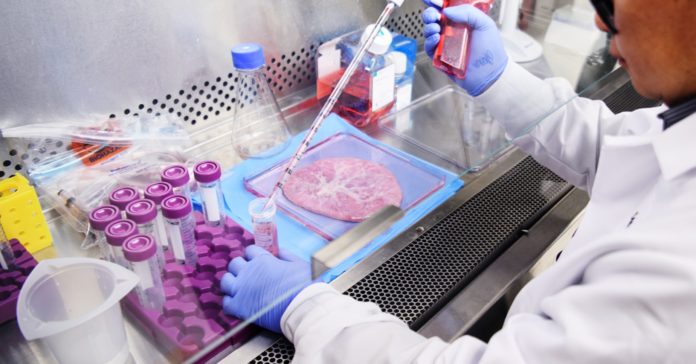 Peter Diamandis’ ambitions have always been too big for the measly planet onto which he was born. The serial entrepreneur built his first dozen companies as technological launch pads for future space colonies. But in more recent years, the founder of the X Prize Foundation has become increasingly interested in helping humans live their healthiest, longest lives right here on Earth. He’s far from the first Silicon Valley futurist to welcome middle age with a pivot toward lifespan extension tech—Sergey Brin and Larry Page have Calico, Jeff Bezos and Peter Thiel have Unity Biotechnology—but he’s getting to be one of the most prolific.

Diamandis started with Human Longevity Inc, a biotechnology company he co-founded in 2014 with with genomics guru Craig Venter and stem cell pioneer Robert Hariri. While the secretive San Diego-based company has so far offered little more to the public than $25,000 “health intelligence assessments,” it has built up a wealth of patient information it’s now funneling into Diamandis’ latest venture. Today, he and Hariri announce Celularity, a $100 million company devoted to using stem cells to turn back the clock on aging. They’re calling it “augmented longevity.”

The catchphrase might be new, but the idea isn’t. In the ‘90s it was dubbed “gero-technology”; in the aughts, “regenerative medicine.” For the last two decades, dozens of companies have tried (and failed) to turn stem cells into a miracle cure for age-related decrepitude. To be sure, hundreds of clinics around the US will inject you with your own stem cells for a hefty fee to treat everything from a bum hip to failing vision. But the products these businesses are hawking aren’t scientifically proven or FDA-approved, and have occasionally led to disastrous results. Stem cells, it has turned out, are much harder to control than anyone realized.

So what makes Diamandis think things will be any different this time around? Well, for one he says, the world has changed. “This conversation around extending the healthy human lifespan is beginning to become mainstream,” he says. “There’s a realization that we can treat aging as a disease and a desire for people to spend money that way.” The FDA is different today too; thanks to the passing of the 21st Century Cures Act in December 2016, the agency has a congressional mandate to put regenerative cell therapies on the fast track. Those therapies of course, still need to pass scientific muster. And for that, Celularity is going to have to rely on Bob Hariri.

Diamandis met Hariri 12 years ago, on an airstrip in Las Cruces, New Mexico. The latter had had flown his Lear jet 2,000 miles for the weekend’s air show. The former was there to award the X Prize Cup’s cash prizes to that year’s civilian spaceflight stars. They started chatting about Charles Lindbergh, whose memoir inspired Diamandis to create the X Prize. But talk soon turned from rocket-powered planes to placentas.

In the ‘80s, when Hariri was a young neurosurgeon at Cornell University, he had an epiphany while looking at a first-trimester ultrasound of his oldest daughter. The placenta was developing so much faster than his peanut-sized progeny, he hypothesized it must be rich in the kinds of cells that give rise to all others: stem cells. And he turned out to be right. The placenta was indeed a stem cell factory. Up until then, stem cells used in medical research were taken from bone marrow, the umbilical cords of newborn babies, and aborted fetal tissue. That last one was the one stoking the flames of a fiercely raging ethics debate. Hariri saw in the placenta a way to get around that moral morass, and an economical one to boot—the temporary organ carries roughly 10 times the amount of stem cells that can be harvested from cord blood.

In 1997, Hariri left Cornell to kick out two companies devoted to collecting placentas, dismantling them, and turning their stem cells into regenerative therapies. LifeBankUSA did the storing, and Anthrogenesis Corp did the processing and productizing. While the latter didn’t actually get any products to market (or publish any of its data), its patented harvesting technology was intriguing enough that cancer pharma giant Celgene bought it in 2002 for $45 million. Hariri became head of the Celgene’s new Cellular Therapeutics Division.

Over the next 14 years, he led the company’s efforts to transform the placenta-derived stem cells into treatments for things like Crohn’s disease, arthritis, and stroke. But of the nine clinical trials the company registered to test the therapies in humans, only four of them were ever completed (three were terminated, one withdrawn due to low enrollment, and one is still ongoing). The cells have yet to make it to market.

To date, the only stem cell-based products approved by the FDA come from cord blood, and are used to treat disorders of the blood and immune system. It’s the most straightforward application; the stem cells in your bone marrow make your red and white blood cells, and clot-forming platelets. If they have a genetic defect, you can blast them out and put in new ones. The cells do exactly the same job in the bone marrow as they do in the umbilical cord. But making stem cells do new jobs is a lot harder.

“There’s been a lot of hype around stem cells, but we’re only just beginning to figure out how to harness their power,” says Diana Farmer, the surgeon-in-chief of UC Davis Children’s Hospital. For the last 15 years she’s been researching how to use placental-derived stem cells to treat spina bifida in unborn babies. “Each disease is a little different, each stem cell is a little different, and matching the right stem cell with the right disease just takes time.”

People like Hariri believe that’s not necessarily the case. Instead, he thinks that lots of diseases—things like cancer and Alzheimer’s and arthritis—are really symptoms of one disease: aging. And so you could treat them with one solution: stem cells. Looking at clinical study data from Celgene’s oncology pipeline a number of years ago, he observed that the stem cell populations inside patients’ bone marrow decreased exponentially as they got older, from one in 20,000 as an infant to one in 20 million as an 80-year-old. “The thesis then became that aging was really a stem cell problem,” he says.

It’s the thesis that Celularity is built around. Not from scratch, but from pieces of existing companies. Celgene is contributing funding and IP, as is Human Longevity Inc. Sorrento Therapeutics and United Therapeutics are licensing immunotherapy assets to be developed jointly. LifeBankUSA—with its 70,000 cryopreserved samples—will now be wholly owned by Celularity, as will Alliqua BioMedical, a company that makes placenta-derived skin grafts for burns, ulcers, and other wounds. The products were originally developed at Celgene, then licensed to Allicqua, then acquired by HLI, then bought back by Celularity.

If all that makes your head spin, here’s an easy way of thinking about it; all of Hariri’s placenta-based stem cell technologies have finally come home to roost.

The business plan is to use the commercially available wound treatment products and the biobanking services to bankroll clinical development of stem cell-based therapies. Start with off-the-shelf CAR-T cells—genetically tweaked, cancer-fighting immune cells—because they’re hot right now, and the Crohn’s disease treatments (because they didn’t fail in trials). Then move on to death.

“Longevity is a big complicated game,” says Hariri. “The first step is eradicating causes of premature death. The next part of the equation is enhancing the quality of life for people who live longer by renewing their exhausted bodily systems.”

If infusions of young cells to refresh your failing muscles and bones and joints sound familiar, it’s because that’s one of the many things predatory stem cell clinics sell to people desperate for cures or pain relief. Hariri doesn’t see them as competition, he sees them as an opportunity. As the FDA has begun to crack down on these clinics in recent months, there’s room for someone who could provide those practitioners with an approved product so they don’t have to operate outside the law.

But getting approval won’t be easy, even leveraging the last 30 years of stem cell science. “There are no shortcuts,” says Farmer. “Everybody’s looking for ‘em, everybody wants ‘em. But I don’t think placental stem cells are going to be any more a magic bullet than any other type of stem cell people have been studying.”

And Silicon Valley isn’t placing all its healthspan extension bets on the placenta. Techies are trying anything that might give them a few extra good years—from fasting to young blood transfusions, to banking their own stem cells taken from their bone marrow. Last month more than 100 people showed up at the Payne Mansion Hotel in downtown San Francisco to swap their secrets at a “Longevity Soiree.” Stem cells were definitely in the air.

But even if they could be used to achieve altered longevity, then there’s still the question of whether they should be. Between the pressures of trying to produce enough food for nine billion people in the next 30 years in an environment that is increasingly volatile thanks to climate change (which hey, is thanks to all those people), inventing ways for people to stick around longer, consuming even more of the planet’s resources, can seem short-sighted, if not downright selfish. Diamandis, however, disagrees.

“I’m more worried about underpopulation, honestly,” he says. The thinking being that as populations get healthier, they’ll become better educated, and then they start entering into negative growth rates, as is happening now in places like Japan and Denmark. “I actually think one of the greatest economic boons would be to have people live longer. If you could be at your mental peak for an extra 20 years, imagine what you could contribute to society.”

Of course, that line of thinking only works if everyone can afford these anti-aging treatments. Longevity therapy, if it does ever exist, might be just another dimension along which the haves are further divided from the have-nots. That and space vacations.

This Is The iPhone 5 According To Recently Leaked Parts [PHOTOS]

Top 10 Most Anticipated Smartphones in 2012