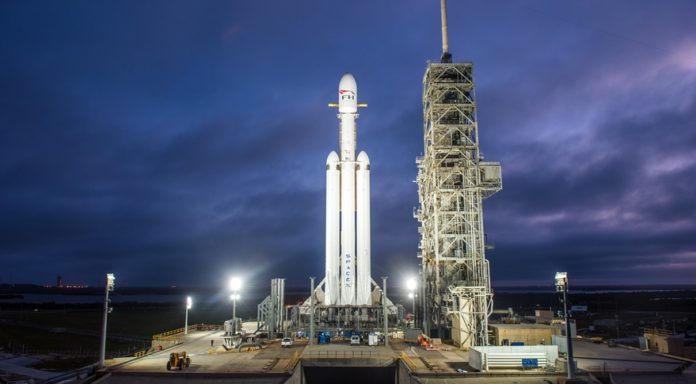 The Falcon Heavy on the launchpad. (Credit: SpaceX)

SpaceX will today attempt to launch its largest rocket yet, the Falcon Heavy.

An upgraded version of the Falcon 9 rocket the spaceflight company has been flying for over two years now, the latest addition to the SpaceX arsenal will be capable of lifting more payload to orbit than any rocket today. The launch is set for sometime between 1:30 and 4:00 p.m. Eastern today (we’ve heard it’s now 3:45 p.m. Eastern).

The payload is a red Tesla roadster (playing David Bowie’s “Starman,” naturally), and the SpaceX CEO says if all goes well, the cargo will enter into an elliptical orbit that will eventually take it past Mars. The launch will take place on historic Pad 39A at the Kennedy Space Center in Florida, which is the same launch pad that sent Apollo 11 astronauts to the moon.

Though the Falcon Heavy has seen its debut rescheduled several times, today’s launch should go ahead as planned. If the weather turns, it could be pushed to tomorrow. Just two weeks ago, SpaceX conducted a static fire test of the rocket’s 27 engines at once, a trial that seems to have given them confidence for a maiden flight.

Though the rocket is new, it’s essentially just three Falcon 9 rockets put together. A central core and two boosters containing 27 Merlin engines give out 140,000 pounds of thrust — enough to launch a fully-loaded 737 airliner into orbit, according to SpaceX. Another Merlin engine on the second stage of the rocket will take the payload into orbit once the first stage falls away. If the rocket proves successful, it will give SpaceX the ability to take even larger payloads to orbit, allowing it to win more lucrative contracts from the government and private companies. A bigger rocket would also be crucial for sending manned missions to Mars.

If all goes well, both the boosters and the core rocket should land back on Earth — the boosters on land and the core at sea — as SpaceX rockets have done before, part of the company’s goal of making spaceflight more affordable.

Of course, there’s a lot that could go wrong, as well. Falcon 9 launches have been marred by explosions, and there are aspects of the Falcon Heavy that have never been tested in flight before. Potentially destructive vibrations could cause trouble as the craft breaks the sound barrier, and the system that unlocks the boosters during flight will also be a focus.

Musk himself seems only cautiously optimistic.

“People [came] from all around the world,” he said, “to see what will either be a great rocket launch or the best fireworks display they’ve ever seen,” according to CNN.