The world recently welcomed a pair of monkeys that were created using the same method used to clone Dolly the sheep.

In a study published Wednesday in Cell, researchers successfully produced two genetically identical, long-tailed crab-eating macaques. Zhong Zhong and Hua Hua were born eight and six weeks ago, respectively, at the Chinese Academy of Sciences Institute of Neuroscience in Shanghai. It’s a technical benchmark that could have future applications in clinical research.

Species closer to humans, such as these old-world monkeys, are more helpful when it comes to studying primate physiological functions. These crab-eating macaques are the most commonly used non-human primate because they are widespread and not endangered, according to Dr. Muming Poo, an author of the study. The ability to create and tailor various populations of genetically uniform monkeys with which to conduct research can be useful in testing out new therapeutic treatments or studying disease progression in real models with minimal individual variation.

“In principle, it can be applied to humans, “ says Poo.

However, he and his fellow researchers are focused on producing animal models that are useful for medicine and human health, especially with genetic-based diseases. Plenty of neurodegenerative diseases have a genetic basis, and Poo is currently using his animal models to target Huntington’s disease. His approach could be further applied in autism or immunodeficiency research.

Although Zhong Zhong and Hua Hua aren’t the first monkey clones ever, they are the first ones to be made using somatic cell nuclear transfer (SCNT), which has been successfully applied in 23 mammalian species including mice, cats and dogs. In this process, the nucleus is removed from a healthy egg cell and replaced with one from another cell. In the end, the newly developed animal is an exact genetic copy of the animal that donated the cell nucleus. 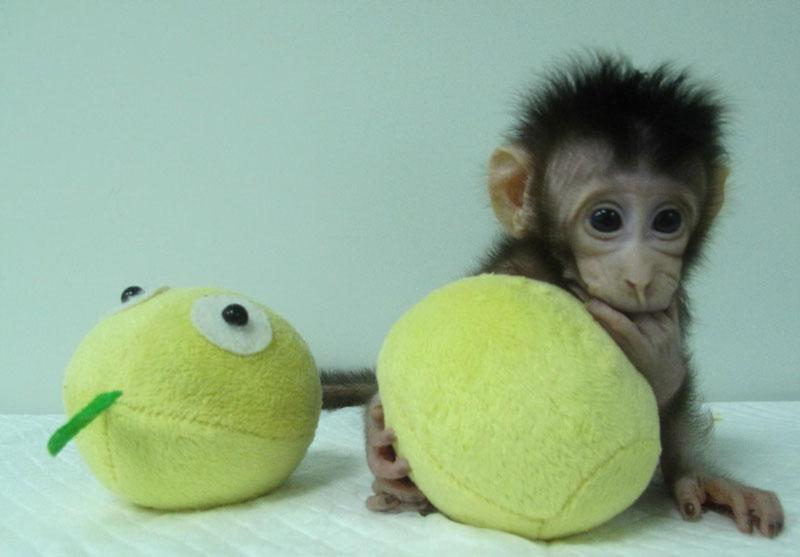 “It’s possible that even though the DNA sequences are the same between the clones, from different mother surrogates, they may produce different epigenetic modulations, especially after birth,” says Poo.

In Zhong Zhong and Hua Hua’s cases, fetal fibroblast nuclei were transplanted into the egg cell. The egg cell was then implanted into a surrogate mother, who then live birthed the newborn.

In addition to Zhong Zhong and Hua Hua, another pair of monkey clones was borne from an adult body cell nuclei transfer, but they did not live long after birth. Poo suspects that adult body cells are harder to reprogram, or perhaps it was simply a numbers issue—if there were a greater sample size, there would be more healthy newborns.

Right now, it takes nine months to produce one generation of clones, said study co-author Qiang Sun, who claims that they can now receive two live offspring from six starter monkeys. They have not yet exhausted different modulation possibilities to yield the highest reproduction efficiency, but their goal is to make it so that as few as possible monkeys need to be used in the process.

Zhong Zhong and Hua Hua are living together in an incubator designed for human babies. Their behaviors and health are monitored daily, and when they are old enough they’ll be subjected to brain scans to check if their neurological developments are also similar.

“They live in the same environment, eat the same food, and are taken care of by the same person,” says Sun.

GizmoCrazed - May 17, 2018 0
In this video of my keynote to the annual Transas Global Conference 2018 – Enterprise Change, I overview key future trends for global shipping,...

GizmoCrazed - July 9, 2020 0
We use cookies to ensure that we give you the best experience on our website. If you continue to use this site we will assume that you are happy with it.Ok