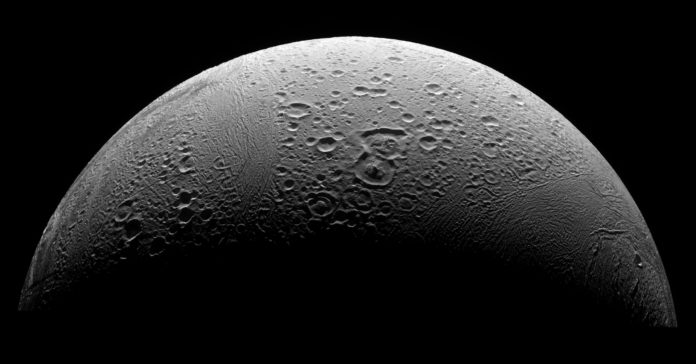 Saturn’s moon Enceladus has become an alien-hunting hot spot, and not just for the tinfoil hat crowd. Thought to be a barren cue ball until NASA’s Cassini mission found both active geysers and a liquid ocean beneath its frozen surface, the icy little moon is now one of the likeliest places to encounter extraterrestrial life in our solar system. Last year, when scientists analyzed Enceladus’ ocean—or a small drop of it blasted skyward in a geyser, anyway—they found evidence of hydrothermal reactions, which produce H2, just the kind of molecular food some little Enceladian organism might like to munch on.

A cutaway view of Enceladus. NASA’s Cassini spacecraft discovered the moon has a global ocean and likely hydrothermal activity. A plume of ice particles, water vapor and organic molecules sprays from fractures in the moon’s south polar region.
NASA/JPL-Caltech

In a paper released today in Nature Communications, one research group has taken its study of potential life on Enceladus one step further. Simon Rittmann, who studies single-celled microorganisms at the University of Vienna, determined that a certain Earthly microbe could survive under the conditions scientists think they’re likely to find beneath Enceladus’ icy crust. In other words, if there’s life lurking on Enceladus, it might be something like Methanothermococcus okinawensis.

Methanothermococcus okinawensis is a methanogen, type of archaea (a kind of single-organism distinct from both bacteria and eukaryotes like us) which convert molecular hydrogen and carbon dioxide into methane—all of which Cassini found in Enceladus’ geyser. (Enticingly, the source(s) of these components, especially the methane bit, are still something of a mystery.) On Earth, the microbe lives in a deep sea hydrothermal vent off the coast of Japan. Rittmann and his team cultivated several methanogens under gas compositions and pressures similar to Enceladus’, but only M. okinawensis survived when they threw in some of Enceladus’ chemical wildcards like formaldehyde, carbon monoxide, and ammonia. Theoretically, if some future mission delivered a sample of the methanogen to Enceladus’ ocean floor, M. okinawensis could probably colonize it.

Is that proof positive of, well, anything? Not really. Methanogens are hardly the only possible source of Enceladus’ methane. Some hydrothermal vents on Earth can produce methane even in the absence of life, and comets, which really aren’t so different from small, icy Enceladus, seem to have picked up methane from interstellar clouds. And even if life on Enceladus does produce methane, it’s not likely to be similar to M. okinawensis in the way a horse is similar to a zebra. “Nature is usually smarter than us. It could have found a way to use that fuel in an entirely different way,” says Hunter Waite, a planetary scientist at Southwest Research Institute. “Would it be like a microbe on Earth? Probably not. Would it even be DNA-based? Maybe not.”

Which doesn’t mean that scientists subjecting microbes to Enceladus-like conditions are wasting their grant money. “I’m pleased people are starting to take deep looks at biological methane production,” says Christopher Glein, a geochemist and planetary scientist at the Southwest Research Institute. “The next step is doing this hard work in the lab to figure out what life might look like from a spacecraft instrument’s point of view.” Now that scientists have a model organism to work with, Glein is curious about the isotopic composition of the biological methane it produces. (Chem 101 refresher: isotopes are variants on a particular element with differing numbers of neutrons in their nuclei.) It stands to reason that methane belched out by microbes would contain different isotopes of carbon and hydrogen than methane produced by hot rocks or some other non-biological process. “It would be really useful in defining some future mission requirements for us,” Glein says. Detecting isotopes is well within NASA spacecraft capabilities, so if biological methane produced by microbes does have some kind of distinct signature, it would be a helpful, easily measurable hint.

And designing future missions, maybe even more than the search for hypothetical extraterrestrial life, is really what all of this is about. “Some people would say we should fly back through Enceladus’ plumes and we’ll find some wiggly microbes,” Waite says. “And we might do that, but the probability is not so high. I would just as soon know more about the chemistry.” Long before anyone encounters an actual alien—if any are out there—deep space missions will probably encounter evidence of them. Unless folks back in the lab keep testing hypotheses, trying to fit these chemical puzzles together, and designing devices to detect them, those missions are likely to fly right on by.

GizmoCrazed - March 9, 2018 0
(Credit: Shutterstock) Thomas Jefferson was quite clear in his belief that an informed citizenry formed the very foundation of a functioning democracy. If that’s the...

As electric vehicles make a move to the mainstream, utilities are...