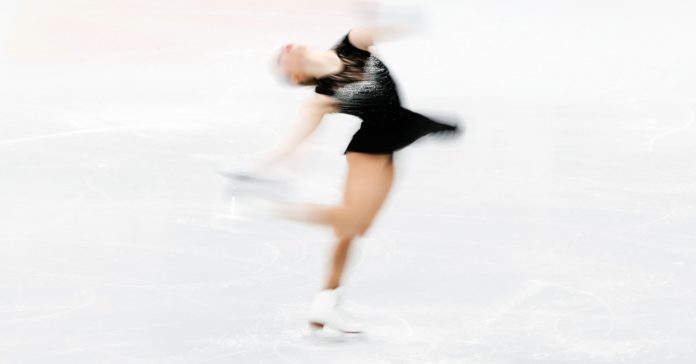 Many people don’t know too much about angular momentum—and that’s fine. But what about figure skaters? Whether they understand the concept of angular momentum doesn’t matter but they use it in one of the all time classic skating moves. You’ve seen it before. The skater starts off in a standing position and spins about the vertical axis. After a few rotations, the skater pulls both arm in closer to the body and spins faster. In physics, we call this conservation of angular momentum.

Just as an example, here is this same maneuver performed on a rotating platform instead of on ice.

Really, you can try something like this on your own. Sit on a nice spinning chair or stool. Start with your arms stretched out as you spin and then bring your arms in. Don’t barf.

But what exactly is angular momentum? In short, it is something that we can calculate that can be conserved. That’s a tough definition, so let me give an example of a conserved quantity—like mass (which only mostly conserved). Suppose you take add some baking soda to vinegar. If you’ve ever done this, you will see that the resulting mixture foams and produces some gas. But here’s the cool part. If you measure the mass of the stuff you start with (vinegar and baking soda) it’s the same as the mass of the stuff you end up with (carbon dioxide and water and sodium acetate). Boom, mass is conserved. It’s the same before and after.

Here is a super quick demo—and you can try this at home. I have two sticks with juice boxes taped to them such that both sticks (plus juice) have the same mass. However, there is a difference. One stick has the juice boxes at the ends of the stick (high moment of inertia) and one stick has them taped to the middle of the stick (low moment of inertia). Now look at what happens when you try to rotate these sticks back and forth (remember—they are the same mass). Oh, to make things more fun I gave the higher moment of inertia stick to the stronger girl. Also, here is a longer video version of this demo.

Now getting back to the ice skater. In the vertical spinning position, there is very little torque exerted on the system (since ice is slippery and the skates are close to the axis of rotation). This means that the angular momentum should stay at a constant value. But what happens if you change something—like bringing your arms closer to your body? This would decrease the moment of inertia. Since the angular momentum has to stay constant, the angular velocity must increase. It’s the only way to conserve angular momentum.

Here is another view (from the top) of this same move—just for fun.

Really, you could easily take some measurements from this. It wouldn’t be too difficult to measure the angular velocity both before and after the arms being pulled in. From that, you could calculate the change in the moment of inertia. But still, I think this move is best left to professionals—the spinning would make me sick.