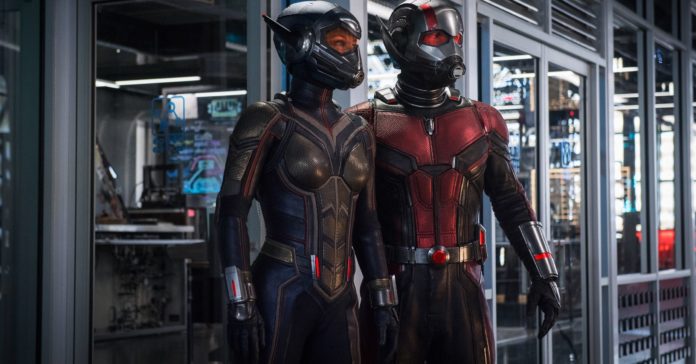 It’s time for another look at the Ant-Man and the Wasp trailer. Previously, I considered what would happen if you shrunk a building to the size of a suitcase while its mass stayed constant. But now I want to look at the van that gets tiny.

So here’s the scene (as far as I can tell—it’s just a trailer after all). Hope Pym (the Wasp) appears to be driving a van in a car chase. She uses the standard Pym-tech and makes the van the size of a toy car. As she continues to drive, she goes under another vehicle to do something cool. Really, the only important thing about that scene is that the tiny van is tiny but still traveling at big car speeds. And here is where I get to go over the physics of rolling wheels. Yes, this whole trailer analysis was just an excuse to do physics. It’s like a sucker punch, except with science.

Even though we see cars driving around with rolling wheels all the time, there is an interesting thing going on. The wheel both rotates about the axle and the wheel moves along the road. You might think this is ordinary, but it’s not. Here is an example. This is a small spool rolling along my counter.

Instead of just showing the rolling thing, I am going to analyze this. If I use Tracker Video Analysis, I can find both the angular position (how much it has rotated) and the horizontal position. Here is a plot of position vs. angle. Oh, it’s important to notice that the spool rolls without slipping.

Notice that it’s a straight line? That means we can fit a linear function to the data. In this case, that line would have a slope of 0.0649 meters. This could be written as the following function relating the position (I will use the variable s) and the angle (θ):

But what does that constant value of 0.0649 meters even mean? It clearly has units of distance—maybe it is a distance? Oh, check this picture out.

It looks the slope of that line is the same as the radius of the rolling circle. Yep, it’s true. That means we have the following expression.

This is the relationship between position and angle for a rolling object—provided that it is rolling and not slipping and the angle is measured in radians. But think about it for a second. Suppose the rolling object made one complete rotation while rolling. It would go through an angle of 2π radians. The distance covered should be equal to the circumference on the object which would be 2π times the radius. Perfect. That exactly agrees with the above expression.

But wait. What are we even talking about? Isn’t this post supposed to be about that tiny van in Ant-Man and the Wasp? OK, that is true. But one more thing first: Suppose I roll that spool and it goes a certain distance in a certain amount of time. I can find the average velocity by dividing the change in position (which would be s) by the change in time (Δt). I already have s on one side of the equation, so I can just divide both sides by Δt.

Of course the left hand side is the speed of the center of the wheel. For the right side of the equation, we have the change in angle divided by the change in time—this is the definition of angular velocity in radians per second. The usual symbol to represent angular velocity is the Greek letter ω. This gives the following relationship:

This is important. This says that the speed that a rolling wheel moves along the ground is equal to the product of its radius and its rotation rate. If you take a big wheel and a small wheel, the big wheel does not need to rotate as fast as the small wheel in order to move the same speed. This is also how just about all the speedometers (I pronounce this as “speed O meter”) work. They detect the rotation rate of the wheel and use the size of the tire to calculate the speed. That’s why changing your tire size can make your speedometer innacurate.

OK, no one cares about that. They care about that darn little van in the trailer. So here is the deal. That van is driving along at some certain speed and then it shrinks—but it stays moving at the same (or about the same) speed. What does this mean? First, it means that the radius of the wheel gets much smaller. Second, it means that the angular speed of the wheels has to increase.

How about an estimation? Let’s start with the speed. They are in an urban setting so they might not be going too fast. I will go with a conservative estimate of 40 mph (17.9 m/s). What about the size of the full sized tire? Maybe it has a radius of 0.35 meters. This means that it would be rotating with an angular velocity of 51 radians/second (487 rpm). I guess all of that is fine.

But what about when the car shrinks? It should have about the same speed, but the size of the wheel is super small. If it was like a Hot Wheels sized car, it would be at a scale of 1:64. This means the radius of the tiny wheel will be 0.35/64 meters. In order to have the same speed, the wheels would have to rotate at 3264 rad/s (over 31,000 rpm). Damn.

Super high angular speeds for a wheel isn’t the problem (well, unless the wheel breaks up due to high speeds). The real problem is the engine. Assuming the gear ratios are the same on the small car as they are on the big car, the tiny van engine is going to have to be at a much higher rpm to get this kind of speed. In fact, if the wheel is 1/64th the size then the engine would have to rev at 64 times the rpms. A full size van running at 6,000 rpms means the small van would be at 384 thousand rpms. Boom. Did you hear that? That was the sound of a tiny little exploding engine. It just blew up.

Don’t worry, I’m still super pumped up about Ant-Man and the Wasp.

Samsung Unveils The Galaxy S5 – The New King Of Android...

GizmoCrazed - February 25, 2014 0
The long wait for the next smartphone in the Samsung Galaxy lineup has come to an end. Samsung has finally taken the veil off...