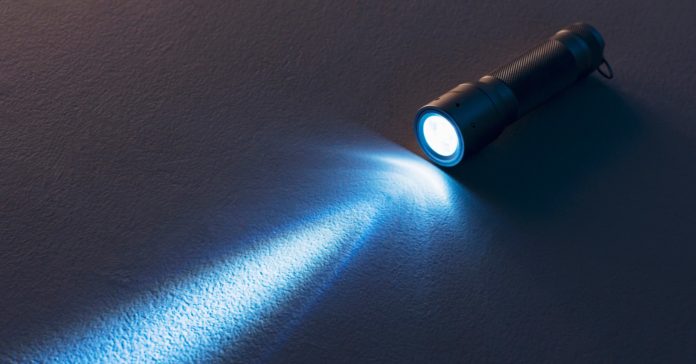 It seems like I have been slightly obsessed with flashlights for quite some time. Perhaps it started when the Maglite lights became popular in the ’80s. It was that mini Maglite that ran on 2 AA batteries that I really liked. It was small enough that you could carry around and bright enough that it could actually be useful. When I was a bit older, I would even build and modify my own flashlights. One of my favorites was an underwater light I used for cave diving. It ran on a large lead-acid battery and powered a 25 Watt projector bulb. That thing was great (but not super portable).

These days, you can get some of these super-bright LED lights. They’re cheap and they last a long time, so I guess there’s no more point to trying to find the best flashlight anymore. But there’s always a point to doing some physics! So my next step is to analyze the brightness—that’s what I do.

The flashlight I have is listed at 900 lumens. But what the heck is a lumen?

Really, the study of light is really old. Back in the day, they didn’t use fancy LED lights or measure stuff with computers. No, they just used candles. In fact, the unit of the lumen comes from a candle. Yes, an actual candle. Technically, it’s from a standard candle—which is a candle that produces a flame of a particular, reproducible brightness. As a candle makes light, it spreads out and decreases in intensity, and if you were to integrate the intensity over a whole sphere surrounding a candle, you would get the total output (technically called the luminous flux—which sounds pretty cool). One candle would have a brightness of 4π lumens (the 4π comes from the area of a sphere).

But wait! How is this different than total power output? Yes, if you have a light it does emit energy per time that could be calculated as power (in Watts). For a typical light, much of this power would be in forms that are not detectable by a human eye—like stuff in the infrared spectrum. So, the brightness in lumens is only the human detectable stuff. Really, this is for the best since in earlier days of science the only light detector that could be used was the human eye.

If I want to measure the brightness of a flashlight, I don’t really want to use my eyes. Eyes don’t give a numerical value as an output. This means I would have to do something weird in order to convince you that a light has a particular brightness. Instead I am going to use a light sensor (I’m using this one)—but it doesn’t measure the brightness. It measures the luminous intensity (at least that’s what I call it but others call it the illuminance). This is the visible brightness per unit of area and it is measured in lux.

Since this might be getting confusing, let me use an analogy. Suppose you have a sheet of paper that is in the rain and getting wet. There are two things to consider for your wet paper. First, there is the rate of rain. It can rain hard or soft. This is like the luminous intensity. Second, there is the rate that water hits the paper. This depends on both the rain rate and the size of the paper. The total rain hitting the paper would be like the luminous flux (in lumens).

However, since I like to make graphs, I will do a slight variation. My flashlight can create a variable spot size. This means I can plot the intensity vs. one divided by the spot area. The slope of this line should be the luminous flux. Let’s do it. (Here is the online plot)

This looks pretty linear—so that’s good. However, I get a slope of 130 lumens—that’s bad, because the flashlight is listed at 900 lumens. OK, here are some possible problems with this value.

Whatever the brightness, it’s still a pretty nice flashlight. But maybe I should build one of these water-cooled LED lights. That would be fun.

GizmoCrazed - May 6, 2016 0
NASA and its International Space Station partners have announced the crew members for missions to the orbiting laboratory in 2017. The selection includes first-time...

Apple could build macOS feature to use your iPad as extra...