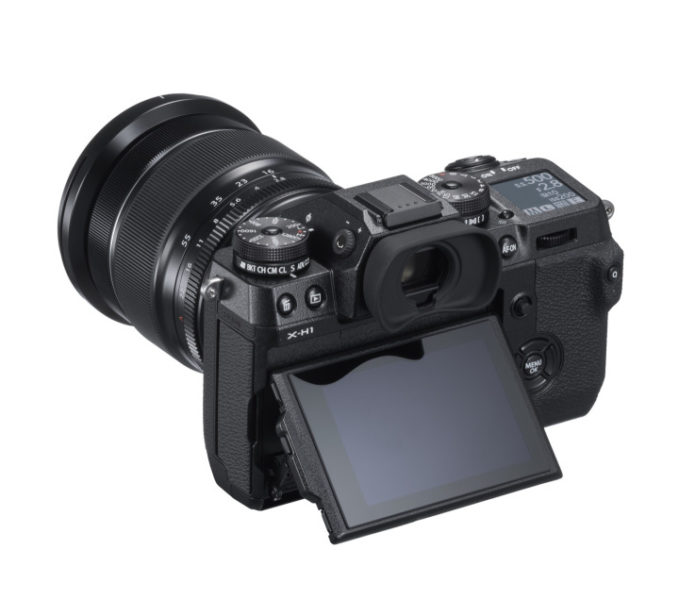 Fujifilm’s mirrorless lineup of X Series cameras has an excellent reputation, especially thanks to their ability to produce great-looking images comparable to full-frame competitors from crop sensors due to their unique image processing. Among still photographers, the X-Pro 2 and X-T2 especially have earned top marks and even replaced the standard Canon and Nikon gear of more than a few pros. Now, Fujifilm is introducing the X-H1, a brand new top-tier camera in the X lineup that could make converts of more than a few more, including those that want great video capabilities from their mirrorless kit.

Already, the X-T2 and X-Pro 2 offer 4K video capture, but the X-H1 is designed to be better all around at recording video, thanks to in-body image stabilization (a first for the X Series line), as well as a brand new flicker reduction feature for dealing with fluorescent and mercury lighting, DCI 4K format recording for maximum editing flexibility when working on captured footage, and with the ability to combine stabilization features with certain Fuji lenses for an extra half-a-stop of stabilization.

The IS features alone are likely to turn heads for Fuji fans and people considering the X Series over competitors including Sony and more traditional DSLRs from the likes of Canon and Nikon. Fuji is promising 5 stops of stabilization form the in-body IS alone, which includes a dual-processor with a range of accelerometers and gyros for use with nay of Fuji’s XF and XC lenses. As mentioned, when working together with the built-in IS features of certain lenses, you’ll also get an additional half-stop of compensation. Fujifilm is also touting a redesigned mechanical shutter with a new spring mechanism to decrease resulting vibration, and the camera has an electronic shutter for avoiding any micro vibrations altogether.

Other movie-making features unique to the X-H1 include a new film simulation mode designed to mimic “cinematic” film, all well as a 120 fps 1080p slow-mo shooting mode. The anti-flicker features mentioned above will help for shooting in less than ideal indoor shooting, and it works with burst shots, too. Finally, a titling touch-panel LCD is good for framing up shots, both in motion and when shooting stills.

The X-H1 sounds like it’ll also be the most durable of Fujfilm’s X Series cameras, with dust and weather-resistance, as well as a magnesium body that’s 25 percent thicker than the X-T2’s for maximum protection of the insides. It’s still relatively compact, especially compared to bulky DSLRs, but it also includes a new, smaller LCD display on the top of the camera that looks like the one on Fuji’s digital medium format GFX 50S for seeing your shot settings at a glance.

X-H1 has the X-Trans 24.3 APS-C CMOS III sensor of the X-T2 and X-Pro 2, as well as the X-Processor Pro image processing engine, as well as on-baord Bluetooth connectivity. It sounds like a tremendous camera with a lot of potential to rival not only all others in the X Series lineup both for still shooting and for movies, but also to maybe topple some of the leading other camera makers. Price plays a factor there, too: It’s retailing for $1,899.95 when it goes on sales March 1 in North America for the body only, which makes it Fujiflm’s most expensive APS-C camera, but also potentially a much better deal in terms of value for money compared to top offerings from many of its closest competitors.

At the same time as Fuji is launching this camera, it’s also introducing new ultra-compact cinema lenses designed for shooting video on X Series bodies, including an 18-55 constant T2.9 aperture lens, and a 50-135 constant T2.9 aperture offering. Both of these should make it possible to get terrific, continuous depth of field across the zoom range while maintaining exposure and sharpness. It’s clear Fujifilm wants to woo crossover photographers who shoot video as well as stills, and this looks like a tough combo to beat.

I’m a big X Series fan myself, and often shoot an X-Pro 2 or X100F depending on what I need in the moment, but I still primarily rely on Canon for work: The X-H1 looks like it could finally convince to go all-in on Fuji’s system for good.

Hepatitis C Can Now Be Totally Cured By New Nanoparticle

GizmoCrazed - July 20, 2012 2
While Americans worry every year about getting a flu shot or preventing HIV/AIDS, the deadlier silent is actually Hepatitis C; killing over 15,000 people...