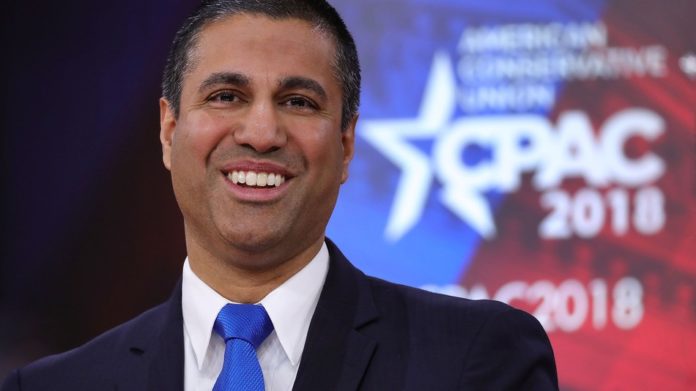 Federal Communications Commission chairman Ajit Pai was set to give a speech at the Conservative Political Action Conference (CPAC) in Maryland Friday afternoon, but instead the organization surprised him with a “Courage Under Fire” award for standing up to net neutrality supporters.

Pai introduced a repeal to the net neutrality regulations brought in during the Obama administration. The FCC voted 3-2 to repeal the rules last year and on April 23 it will be officially dead, barring any successful legal challenges.

To achieve his dream of demolishing fair and free access to the internet, Pai had to endure angry internet crusaders.

American Conservative Union (ACU) executive director Dan Schneider swooped in as Pai was ready to speak and announced that no speeches would be happening. Instead the organization wanted to recognize “the most courageous, heroic person.”

Schneider detailed death threats, property invasions, and abuse targeted at Pai’s family all so Pai could “save the internet.”

For his efforts, the NRA brought its 2nd vice president Carolyn Meadows to present Pai with the Charlton Heston Courage Under Fire Award. This is a special award for “when someone has stood up under pressure with grace and dignity and principled discipline,” she explained.

The award itself couldn’t be brought to the stage — that’s because it’s a handmade Kentucky long gun kept in a museum with a plaque. “You’ll love it,” Meadows told Pai.

Pai seemed bummed that he didn’t get a chance to talk about the FCC and handing the internet over to corporate service providers. But after during a FCC panel with his fellow commissioners he was able to share some of his thoughts, including his initial reaction to receiving a rifle for killing the internet: “I wasn’t expecting it.”