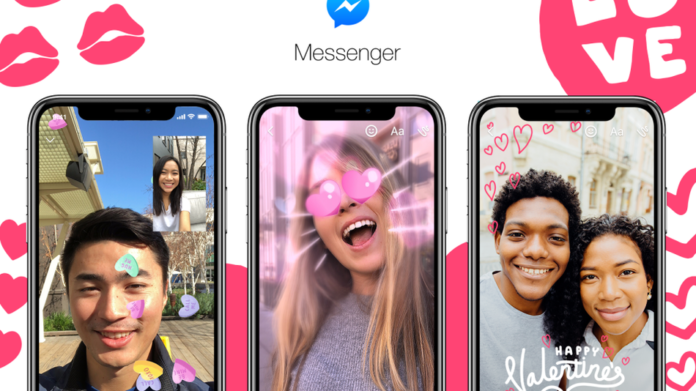 Ten years ago, the pressure my fellow teens and I felt to make a budding relationship “Facebook Official” was real. But with fewer teenagers than ever using Facebook (in favor of Snapchat), and with us now-twenty-somethings living our lives on Instagram, the stress-inducing relationship status feature has become blissfully irrelevant.

On Tuesday, Facebook rolled out new features in Messenger that give significant others special statuses with each other.

Messaging convos amongst newly-declared ~lovers~ will open with a “shower of hearts,” as Facebook describes it. The easy-access emoji for all BF/GFs will be a heart eye emoji. Couples will be prompted to personalize chat features like colors and nicknames. And your partner will always be Numero Uno in your Facebook Messenger “Active” tab. As if you weren’t already keeping tabs (heh) on them already.

How does one unlock these features? By returning to the actual Facebook app, and letting Facebook back into your love life by telling them that you’re “In A Relationship.” Noooooooooooo.

While there’s nothing like Valentine’s Day to really get your cynical side fired up, it’s hard not to read these features as a ploy to get Messenger users back on Facebook by re-elevating the importance of the “Relationship Status.”

It’s a well-known trend that Facebook use amongst younger users has declined. But Facebook found in its own study that 67 percent of people are increasing their use of messaging apps, including Messenger. As of January 2017, 50 percent of US teens used Messenger daily, and 91 percent of teens on Facebook are active on Messenger every day.

Facebook has definitely taken note of young peoples’ love of messaging. It’s been steadily increasing investments in messaging, both with the development of  Snapchat-like features in Messenger, and through its ownership of WhatsApp.

But we can’t forget that the Facebook platform itself is where users see ads — and where Facebook makes a ton of money. The Messenger and Facebook apps are de-coupled. So if Facebook wants to keep its main app cash cow alive, it will need to eventually bring young users back to Facebook, and not just bank on the popularity of Messenger.

Which is where the “Relationship Status” comes in. In high school, I remember consistently refreshing my Facebook page to see if the boy I was in a ~thing~ with had sent me an “In A Relationship” request. The need to publicly declare that I was desired, coupled, was a source of anxiety and longing when I didn’t have it — and burning adolescent pride when I did.

As the first generation of teen Facebook users grew up, we learned that the perils of the relationship status outweighed the smugness and perks it provided. It was heart-wrenching when the person you had recently broken up with also made your break up “FB official” — like breaking up all over again. Plus, it was public. Over the last decade, we learned through hard-earned experience that some things are best kept off of our News Feeds. The pride we once took in the retrospectively embarrassing “It’s Complicated” status diminished as the messy realities of dating sunk in.

It took my current partner of nearly five years and me ten months to become officially, BF-GF exclusive. At no point in the beginning did we ever declare that it was “complicated” — though it was — to Facebook. Nor have we ever requested to be “In A Relationship” online, though we are, IRL. It has never even been a conversation, in stark contrast to the angst I remember feeling when I would ask my high school beau again and again why we couldn’t go from “It’s Complicated” to “In A Relationship.” A scan of my coupled friends’ pages shows that most have spurned the Relationship Status, too. And several essays and surveys confirm that the public pain, embarrassment, awkwardness, and performativeness of the status has made 20-somethings largely abandon the feature.

But the next generation hasn’t learned these lessons. They’ve also shown that filters and emoji and especially status hold power — just look at Snapchat’s drama-filled “streak” culture for proof that a public declaration of closeness can lead to obsession (which Facebook is also reportedly trying to hone in on).

No social media company invented the centrality that romance plays in the lives of teenagers and young adults — it just capitalized on it. Linking the turbulent emotions surrounding first love to a social media status symbol was how I got hooked on Facebook back in 2005. Now, could it be a perfect way to get teens to use Facebook again?

Sure, the new Messenger “couples features” could just be a fun Valentine’s Day stunt. But then again, all Facebook might need to lead young users back to this feature (and the main app) is a gateway drug updated for 2018 — and that comes in the form of perks, only given to those in couples, through the teen-friendly Messenger app.

The “Relationship Status” amplified the worst things about relationships: heartbreak, and the need for a relationship out of status, and not out of love. Especially around Valentine’s Day, when the pressure to couple is greater than ever, we definitely do not need it back.

So Facebook, back off, and let us eat our chocolate in peace.

Data Transfer At 26 Terabits Per Second Using A Single Laser,...

GizmoCrazed - May 27, 2011 0
Researchers from Karlsruhe Institute of Technology in Germany have set a new world record for the data transfer rate using a single laser at 26 terabits per second. At...

Here are some standouts from 500 Startups’ 22nd demo day